Reason for optimism? Nike (NKE) will report the firm's fiscal first quarter financial performance after the closing bell tonight. The firm's fourth quarter was awful. Understandable, give this pandemic environment and what it has largely done to brick and mortar retail, especially apparel. That said, having a good reason for being late for school still doesn't get you to school on time. The firm has to do better this quarter, and it probably will. The lingering questions are... One: Will sequential improvement be good enough for investors looking for the firm to close the gap with annual comparisons?...and Two: How well has the firm cut expenses, and managed inventory? In other words, where will margins land?

There is reason for optimism. The firm has elevated levels of exposure to China, both on the manufacturing side as well as on the consumer side. As that nation appears to have managed to re-open its economy ahead of some others, have those consumers returned to Nike? Direct to consumer has been a Nike strength here in the U.S. Has the firm been able to grow this strength? Lastly, and this is a tricky one...as the U.S. economy has tried to re-open, store comps at Dick's Sporting Goods (DKS) , Foot Locker (FL) , and Lululemon Athletica (LULU) , all show some positive evidence that would likely shade Nike's way.

Negative thoughts? Oh, there are a few. Even if brick and mortar did better during the first quarter, can that be sustained as "back to school" was certainly a mess, and many areas expect the possibility of a resurgence of the virus to slow down holiday sales as winter approaches. Oh, I don't know if it matters to Nike, but it probably does. Nobody ever expected such a profound lack of public interest in the NBA playoffs. Nobody, I know, and some of these guys were actual fans... even know who's playing.

This evening, Wall Street is looking for Nike to report EPS of $0.46. That would not only be a return to profitability, but year over year "growth" of -46.5%. The firm is expected to have generated revenues of $9.12 billion. Yes, again that's "growth" of -14.4% year over year, but that number would also be good for actual growth of 44.5% quarter over quarter. The street looks for operating margin of 9% or so, on gross margin of roughly 43%. Over the past three months, of the approximately 25 sell-side analysts that cover NKE, I find 14 that have lowered expectations for revenue, while only four have increased their numbers.

One interesting take-away this evening could be, in the Peloton (PTON) driven era of working out at home, growth in the Nike Training Club. This was a source of strength found within the troubling fourth quarter numbers. The positive? A club like this probably leads to increased sales of footwear and athleisure wear through digital channels. The negative? The space is quickly becoming more competitive as Apple (AAPL) has joined the fray.

The risks are plenty. The economy doesn't have to shut down. The public just has to shy away if the spread of the virus can not be controlled into the colder weather seasons. The recession that both the U.S., as well as the rest of the planet are still going through, could become much more severe. In fact, it feels like Congress is reaching for such an outcome. The U.S. consumer will not spend on footwear, athletic equipment, nor apparel if they are flat out broke. At least not high end products which is Nike's niche. Early in this pandemic, fiscal authorities kept many consumers whole. This is no longer the case. Precious savings will be spent on other priorities. 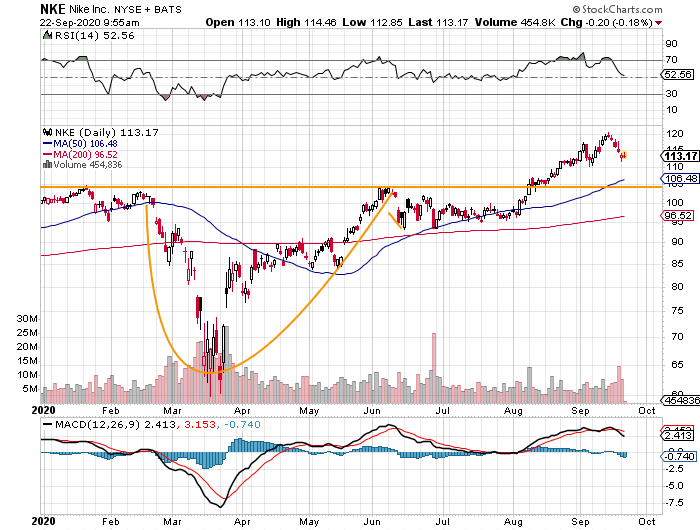 Investors have already had their break-out in this name off of the pivot just below $105. I probably would have had a target in the mid-$120's had I been in the name. That means that the shares never hit the target prior to selling off for five consecutive sessions. There could be a head and shoulders formation brewing. This means, if it plays out that today could turn into a tradable pop, but... and this is a big but, the trend may have reversed for this name. I would probably rather play this name from the short side, but the risk must be contained. I will show you an example.

Notes: This is a short-term trade meant to work or not by Friday. Expiration dates can be pushed out for investors who think differently. The purchase of the call and the sale of the put for about the same price manages the risk at no expense. The catch is that profit is capped. That's no problem because this is a trade, not an investment, and we play probabilities here. There are no sure things. The trader is trying to make a little over $3 through risking a like amount.

(Nike and Apple are holdings in Jim Cramer's Action Alerts PLUS member club. Want to be alerted before Jim Cramer buys or sells these stocks? Learn more now.)

Get an email alert each time I write an article for Real Money. Click the "+Follow" next to my byline to this article.
TAGS: Investing | Stocks | Technical Analysis | Trading | Retail | Sports business | E-Commerce | Sports | Earnings Preview | Coronavirus