Strong global branding never hurts. Only goes so far. For the firm's fiscal fourth quarter, Nike (NKE) reported EPS of -$0.51, a surprise bottom line loss where a profit had been expected. Revenue landed at $6.31 billion for the quarter, down 38% year over year, and a whopping $950 million below what Wall Street had been looking for. Gross Margin? That was perhaps the biggest miss of them all in a quarter chock full of them. This line printed at 37.3%. This was down from 45.7% one year ago, and well below expectations of 43.4%.

The impacts of the Covid-19 pandemic were evident throughout the release. North American sales declined by 46% year over year, as they did across the Europe, Middle East & Africa region. Latin American sales dropped by 42%. Only in Greater China did Nike perform relatively well. For that region, sales decreased by 3%, or actually increased by 1% excluding the impact of currency exchange rates.

There are bright spots for sure. The most obvious would be a 75% increase year over year in digital sales. If e-commerce is the future by choice or due to the pandemic, then Nike is doing a solid job of driving sales in that direction. Another would be the ability to retain the loyalty of the Chinese consumer. This market is huge for Nike, and even working around the pandemic there, it is apparent that Nike has not lost that consumer. Lastly, the firm states that roughly 90% of firm-owned stores are now open globally, and foot traffic is improving on a weekly basis.

The good news was more than offset by those reduced sales for the quarter reported as well as significantly rising costs. In the era of Covid, products cost more to make, and factors such as factory cancellation charges, increased inventories, as well as fixed costs associated with maintaining supply chains factor in. The only way to make that work is to increase shipments both at the wholesale and retail levels. A lot of chained stores that sell Nike products are in shopping malls and remain closed.

The sell-side had less to say than one might think given the magnitude of the name. Since Thursday night, I have only seen four analysts rated by TipRanks at 4.5 stars or greater even opine on the name. The focus appears to be on e-commerce, as readers might suspect given that's where the growth is, even in this environment. Of those four, three stuck with "Buy" ratings. Mattew Boss of JP Morgan is perhaps the most aggressive with a price target of $118. The "Hold" rating came from the desk of Randal Konik at Jefferies who offered up a price target of $95. 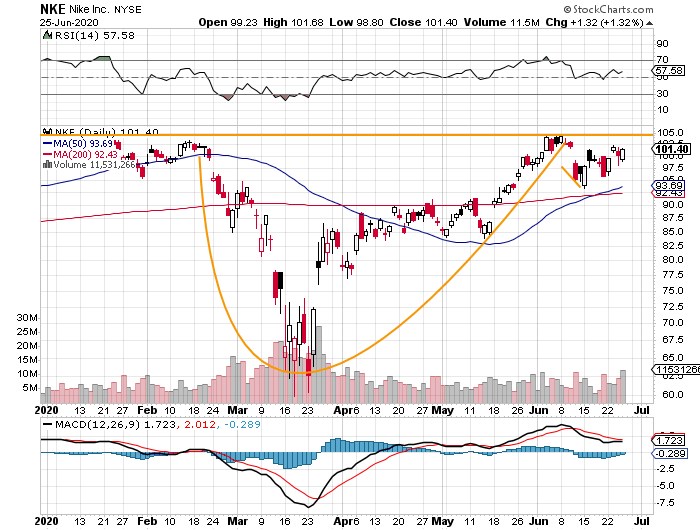 This morning, I see NKE was trading around $96.87 after the opening bell. Obviously, at least not this morning, I would not look for NKE to make a run at the $105 pivot created by the cup with handle pattern completed earlier this June. Would I buy the name on this dip? Not yet. See the 50 day SMA of $93.69? See the 200 day SMA of $92.43. At least down there, you know that there is some traffic on the chart. Perhaps better support.

What a trader could do, would be to wait... and hope.. and grab a few shares down there, if and when they get there. Or, that trader might write (sell) an August $90 put for a couple of bucks and get paid to take on that discounted risk should it develop. Either the trader gets paid for his or her troubles, or ends up buying the shares below today's perceived support level.

Get an email alert each time I write an article for Real Money. Click the "+Follow" next to my byline to this article.
TAGS: Earnings | Investing | Options | Stocks | Technical Analysis | Trading | Retail | Sports business | E-Commerce | China | Coronavirus

Big tech reports are landing, and we are in for some rough trading over the next few days.

While Intel stumbled, other major chip developers and manufacturers have been generally upbeat amid strong end-market demand. And M&A activity is on the upswing again.

Bullish or Bearish, Here's How to Play Carvana

This isn't a name I'd play aggressively into earnings, but a small gamble here could pay off in a big way.

What's Going On With the Share Price of Gilead?

Can Ford Continue to Grind Higher?

Let's review the charts again after its latest earnings report.