Not the intent. That I understand. Indeed, fully understood is the need to confront nations, such as China, that have long imposed protectionist policies upon trading partners using the potential size of that nation's consumer market and cheap labor as leverage as multinational corporations based in highly developed economies have sought out less expensive means to develop cross border supply lines. Then there are the issues of forced partnerships and theft of intellectual properties that further put trading partners at an unfair disadvantage. The fact that these issue were left on the back burner for so long, and that China for many years had been permitted to over promise and then under deliver is why the issue now comes to a head.

For the short-term, these overarching factors will matter little to those trying to invest around what is now a financial obstacle course. Among the obvious industries that will feel the moist pain will be large cap industrial type names, and the Materials as global economic growth further slows. In addition, the semiconductors, the retailers, and consumer electronics type firms will struggle as those firms will now face a choice of either moving supply lines away from China which will be costly to do, or simply charge more for their wares hurting not only U.S. consumers, but probably also revenue generation. Either that, or face pressured margin. All the while these firms are likely to be hit with sanctions of some kind by the Chinese government in response, while the Chinese consumer in all likelihood turns to Chinese competitors in a show of nationalism. Tough climate. Nike (NKE) , the athletic shoe and apparel company, is an example of such a firm that is in such a bind.

Now, don't get me wrong. Nike has shot themselves in the proverbial foot more than once. From sneakers that fell apart on national television while being worn by the most famous player in college basketball to the Betsy Ross shoe controversy that seemed to the casual observer to be possibly aimed at making headlines as much as any social cause. You'll recall that for the fourth fiscal quarter, Nike reported a miss on earnings generated by better than expected revenue. Gross margin slightly missed consensus as expenses related to "selling and administration" increased 9%. What strength there was in margin came from the Nike Direct business.

The Chinese consumer certainly did not seem swayed by the trade war. Not only does Nike have to worry about this, but so do many firms across a broad array of businesses including Sarge fave Apple (AAPL) . You know who does not have to worry about losing sales in China? FANG. That's right. Firms such as Amazon (AMZN) , Alphabet (GOOGL) and Facebook (FB) have zero exposure, not to mention most of your favorite cloud/software names. Not a lot of exposure there. Nike was able to boast 16% sales growth in China for the quarter, while they slowly started to move operations elsewhere.

Currently, Nike manufactures 49% of the firm's footwear in Vietnam. Just 23% in China. The firm manufactures 27% off all apparel in China. Since the start of the trade war between the U.S. and China, Nike has moved roughly 6% of it's manufacturing to Vietnam. In addition, the firm has announced plans to go ahead with the building of a $184 million facility to be built in Goodyear, Arizona despite the withdrawal of a state grant in the wake of the Betsy Ross sneaker news. The fact is that moving established supply lines is a drawn out process.

Still, China as of the last quarter, provides the firm with 16.7% of total revenue generation. Fortunately for retailers, as well as for consumers, by the time new U.S. tariffs are scheduled to be implemented (September 1), "Back to School" season will have passed.

But Some On This Dip? 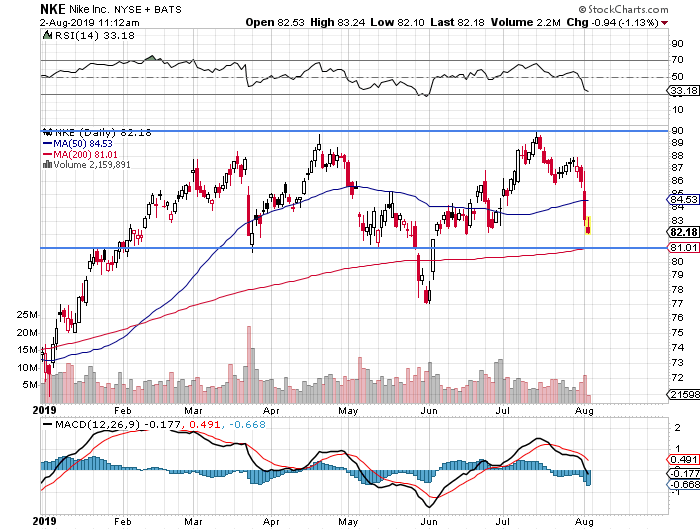 The short answer is no. A better explanation would be that I spent the overnight increasing my cash position where I thought appropriate, and I would be careful about where to add new capital exposure. For those already long this name, you see the 2000 day simple moving average (SMA) at $81? That's also where support had been found back in March.

The algos see that spot too. That spot breaks and you better hope $77 holds, because I would expect fund participation to accelerate upon such an occurrence. You want in? Better to wait and see if the shares can re-take the 50 day SMA at $84.50. Right now, Nike is just caught out in the open.

Get an email alert each time I write an article for Real Money. Click the "+Follow" next to my byline to this article.
TAGS: Earnings | Investing | Markets | Stocks | Technical Analysis | Trading | Retail | China | Stock of the Day