Nike (NKE) has been trading the past four months with a temporary downside break in late May and early June. This breakout now looks to be a "shake out" move as the charts look positive again. Was this a "bear trap"? Let's check the charts and indicators.

In this daily bar chart of NKE, below, we can see that prices were finding support around $82-$81 until they broke below the 200-day moving average line for just a few days.

It is tempting to "just put your thumb over" that price action to clean up the dip, however volume did not increase significantly and the OBV line did not establish a trend lower so this may have been just a temporary shake out.

The Moving Average Convergence Divergence (MACD) oscillator is back above the zero line like nothing happened.

In this weekly bar chart of NKE, below, we have mixed signals. Prices are in an uptrend from October 2017. NKE is above the 40-week moving average line but the slope of the line is now flat or level.

The weekly OBV line shows a bearish divergence when compared to prices. Prices made new highs for the move up in March and April but the OBV line made a lower high suggesting that buying was less aggressive this spring versus last summer.

The MACD oscillator made a lower high in April/May than in September of last year even though prices made a higher high. Another divergence.

In this Point and Figure chart of NKE, below, we can see a potential upside price target of $104. A trade at $89.96 is needed for a bullish breakout. 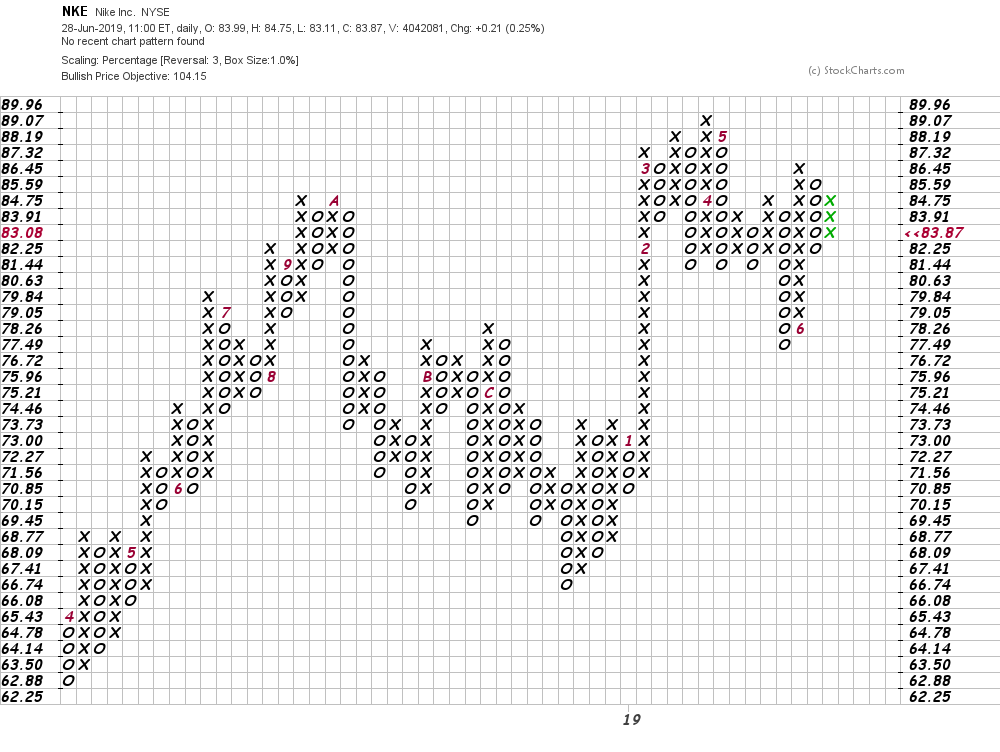 Bottom line strategy: Overall, NKE displays a mixed technical picture but the temporary breakdown and quick rebound in late May/early June suggests there are serious buyers below the market. The path of least resistance could well be higher. Aggressive traders could go long risking a close below $81. Our target is the $104 area.

Get an email alert each time I write an article for Real Money. Click the "+Follow" next to my byline to this article.
TAGS: Investing | Stocks | Technical Analysis | Trading | Apparel | Sports