Towards the end of Jim Cramer's Mad Money program on CNBC, he has viewers and readers call in with their buy/sell/hold questions about individual stocks. It is fast-paced and here is what he had to say in the Lightning Round about New Relic (NEWR) : "I like New Relic. I think it's time to buy."

Let's also check out the charts and indicators of NEWR before jumping in with a possible purchase.

In this daily bar chart of NEWR, below, we can see a mixed picture with our favorite indicators and the price action of NEWR. The price of NEWR peaked back in July and prices declined to a low in November and a retest in December. NEWR rallied with the broad market in January but it has become stalled in February and March so far.

Prices are above the rising 50-day moving average line but a close below $98 would break that rise. NEWR is above the 200-day average line but that line is flattening. Despite a bullish golden cross of these averages last week, it looks like this moving average crossover signal is going to be too belated to be successful. The volume histogram below the price chart shows a volume surge or spike in early February and prices have essentially been stalled since that point.

The daily On-Balance-Volume (OBV) line has moved sideways to lower since early February and that is not suggesting aggressive buying.

In this weekly bar chart of NEWR, below, we see what could become a double top formation. Prices had a good rally from early 2016 and more than tripled into the mid-2018 highs above $110. There is a decline to around $70 followed by a rally back that has so far stopped short of $110. Prices are above the flattening 40-week moving average line and the pattern is far from complete.

The weekly OBV line shows a high back in June of last year and the recovery in the OBV line this year looks like it is failing short of the previous high.

The weekly MACD oscillator looks even weaker than the OBV line. The oscillator is in positive territory above the zero line but it has begun to narrow towards a possible bearish crossover.

In this Point and Figure chart of NEWR, below, the price swings have been deemed distribution (selling) and a downside price target of $89.99 is being projected at this point in time. A rally to $109.77 would be bullish, however. 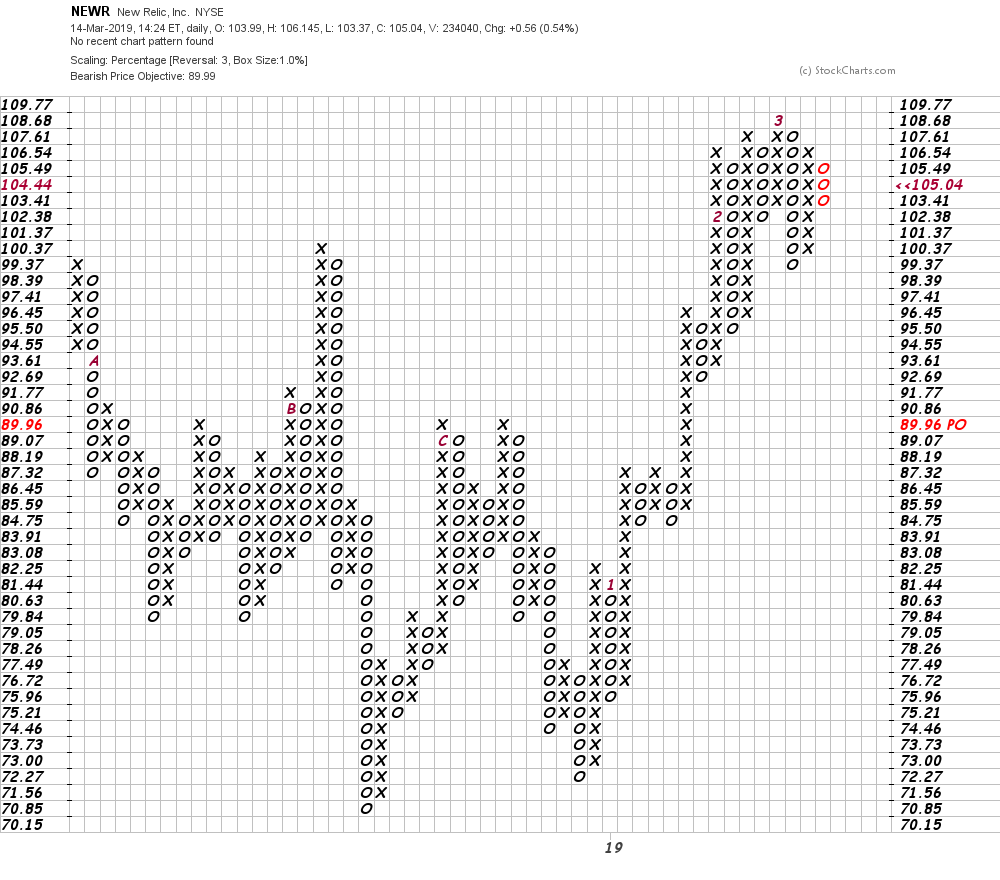 Bottom line strategy: Existing longs in NEWR should consider raising sell stop protection to a close under $99 for traders and a close below $95 for investors.

Get an email alert each time I write an article for Real Money. Click the "+Follow" next to my byline to this article.
TAGS: Investing | Stocks | Technical Analysis | Trading | Mad Money

Did the Fed Overreact and Print Too Much?

The central bank is stuck between a rock and a hard place, which it knows fully well.