By BRUCE KAMICH Sep 23, 2019 | 08:45 AM EDT
Stocks quotes in this article: NFLX
Netflix ( NFLX) scored 27 Emmy awards and is the 'Stock of the Day' at Real Money this Monday. Honestly I did not stay up and watch the Emmy Awards. No big interest in the Red Carpet and the glitter. My cousin was an actor and worked with Tony Shalhoub on Monk for many years and off camera his was just my cousin Stanley. No big deal. And shame on me - I did not watch the football games either. I guess I should be well rested and able to take a fresh look at the charts this morning. Let's do that.
In this daily bar chart of NFLX, below, we can see that prices traded sideways for nearly six months before the game-changing downside gap in July. Prices plunged below the 50-day moving average line and the 200-day moving average line too. A late July bounce failed at the underside of the 200-day line. The 50-day line has been negative since the middle of July.
It looks like prices stabilized a little in late August and early September but prices began weakening again last Thursday. The trading volume has been heavier since July, telling us that traders and investors are more active, and validating the new downtrend.
The daily On-Balance-Volume (OBV) line has been very weak from July telling us that sellers of NFLX have been more aggressive with heavier volume being traded on days when the stock has closed lower. The Moving Average Convergence Divergence (MACD) oscillator is bearish.

In this weekly bar chart of NFLX, below, we can see what I would call a large top formation going back to early 2018. The high near $425 has not been revisited so we have what I would call a lopsided double top. Prices are below the 40-week moving average line.
The weekly OBV line peaked in July 2018 and tells us that sellers have been more aggressive for a long time. There is some chart support in the $250-$225 area but the big risk for NFLX is that this support does not hold.
The MACD oscillator is bearish on this longer time frame.

In this Point and Figure chart of NFLX, below, we can see the recent price action to a new low for the move down and a possible downside price target of $224. 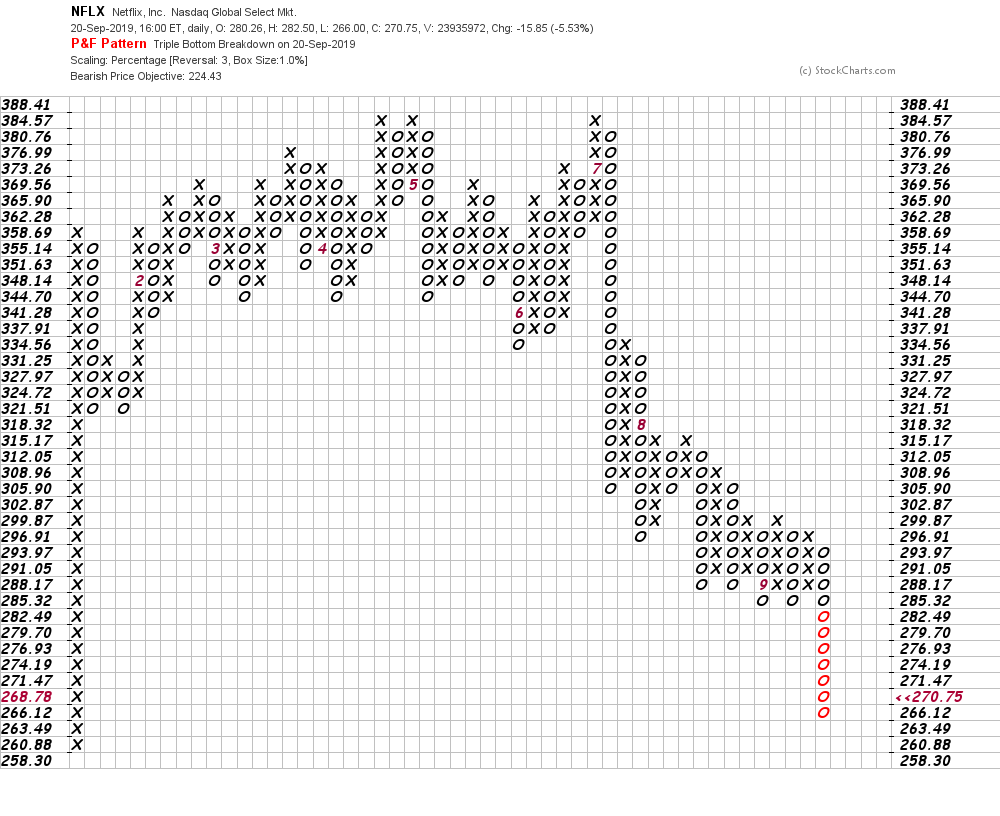 Bottom line strategy: The charts and indicators of NFLX are not bullish. They are bearish and pointed down. We could see a rebound or reflex rally but the odds, in my opinion, are for further losses. Avoid the stock but keep watching your favorite shows.
Get an email alert each time I write an article for Real Money. Click the "+Follow" next to my byline to this article.
TAGS: Investing | Stocks | Technical Analysis | Trading | Television Production/Distribution | Stock of the Day