During Friday's  Mad Money program, Jim Cramer told viewers his game plan for this week's action begins on Tuesday, after the long holiday weekend. He expects great earnings from Goldman Sachs (GS) , but said Bank of America (BAC)  will be hard pressed to impress Wall Street. He still liked Netflix (NFLX) , but said streaming fatigue is beginning to set in.

Netflix is expected to report earnings after the close Monday for the fiscal quarter ending December 2020.  Let's check out the charts to see how traders may be positioning themselves.
In this updated daily bar chart of NFLX, below, we can see that prices have traded sideways since the middle of July. Prices were $200 over the 200-day moving average line in July but are only about $20 above it now. Depending on earnings tonight we could see a test and maybe a break of the 200-day line in the days ahead.
The slope of the 50-day average line is neutral and prices have been crossing above and below it for months now. Trading volume has been diminishing since July suggesting a dwindling interest from active traders.
The On-Balance-Volume (OBV) line shows a peak in July and lower highs since then suggesting that sellers of NFLX have been more aggressive.
The trend-following Moving Average Convergence Divergence (MACD) oscillator has been weakening since July (lower highs) and is now poised for an outright sell signal upon crossing below the zero line.

In this weekly bar chart of NFLX, below, we can see the sideways trading range since July. Prices are close to a test/break of the rising 40-week moving average line. The weekly OBV line shows a decline from May and looks more bearish than the daily line. The MACD oscillator is in a bearish alignment and pointed down towards the zero line.

In this daily Point and Figure chart of NFLX, below, the software has generated a potential downside price target in the $427 area. 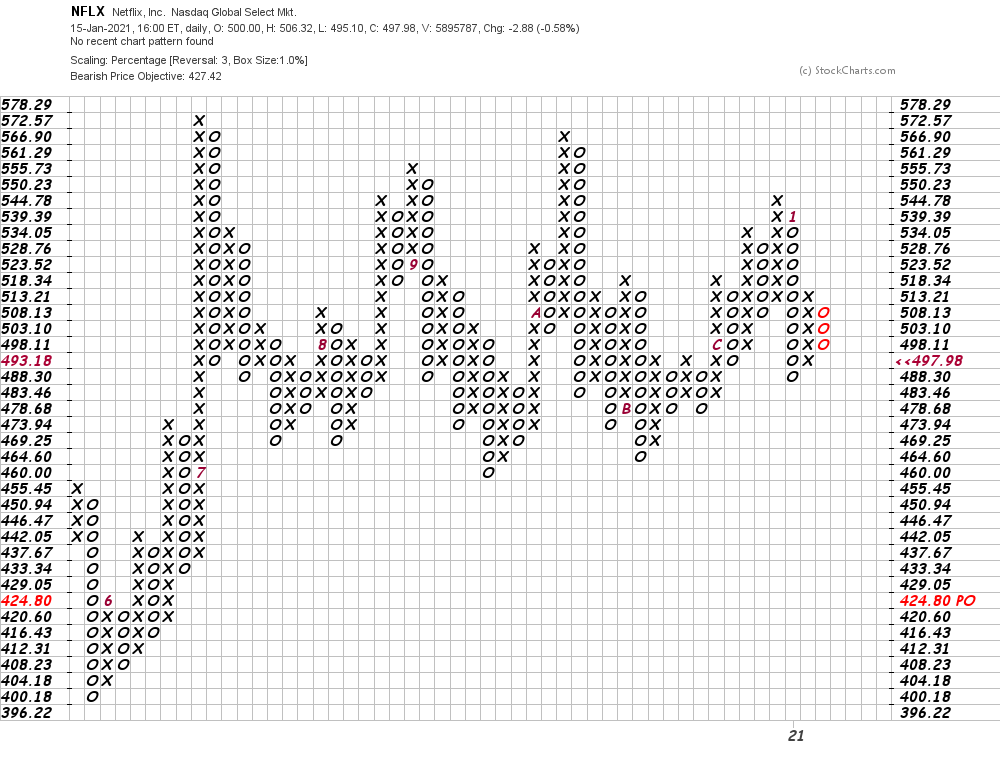 Bottom line strategy: I have no special knowledge of what NFLX will report tonight but the charts and indicators have been weakening for several months and the Point and Figure chart is projecting a move lower. Traders should avoid the long side of NFLX for now.

Get an email alert each time I write an article for Real Money. Click the "+Follow" next to my byline to this article.
TAGS: Investing | Stocks | Technical Analysis | Trading | Movies | Mad Money | Earnings Preview