"We're ready when you are." I suppose maybe they are, "they" being Delta Air Lines (DAL) , that being the firm's old slogan, used on and off since the 1960s.

Delta released its fourth quarter results on Thursday morning. The company posted adjusted EPS of $0.22, which beat Wall Street by about seven cents, and was up significantly from an adjusted loss of $2.53 per share for Q4 2020. Revenue generation over the three month period amounted to $9.47B, up 138.5% from the year ago period, and a beat of consensus view by slightly less than $200M. GAAP EPS came to a loss of $0.64 per share, but as an investor/trader, I don't know if one can use actual or GAAP results as a means of measuring the successes or failures of the airline industry just yet.

The revenue number was the firm's highest since the pre-pandemic era, as holiday bookings were strong, and business travel improved. That said, the firm has acknowledged the impacts of the recent surge in new infections of the Omicron variant of Covid. These infections hit staffing levels, and took thousands of flights out of service in recent weeks, pushing an expected recovery for broader demand out to beyond President's Day (February 21) weekend.

For the fourth quarter, Delta posted a GAAP net loss of $408M (adjusted up to a profit of $143M) as expenses such as fuel costs increased. For full year 2021, Delta did put together a GAAP profitable year (despite the fourth quarter loss of $408B) at $280M (adjusted downward to $-2.598B) thanks to $4.5B in federal aid to help the airline weather labor costs throughout the pandemic. Operating free cash flow for the fourth quarter landed at GAAP $555M, adjusted to $-441M, while that same metric for the full year printed at GAAP $3.264B, adjusted down to $1.255B.

Q4 revenues represent a 74% recovery comparable to Q4 2019, on a 79% recovery in capacity. Peering forward, Delta expects current quarter revenue to show as 72% to 76% recovered versus Q1 2019, on capacity expected to be at 83% to 85% recovered (vs. 2019). The firm expects to post a loss for this first quarter of 2022, as Omicron has pushed out demand for an estimated two months. The firm also sees expenses rising approximately 15%. However, the firm remains positive for the remaining three quarters of the year, and all told, sees "meaningful profit in 2022."

First, the balance sheet is a work in progress. The firm's current ratio is going to be below the preferred "one" level and if one wants exposure to a recovery in the airline industry, then one is going to have to get used to that. Current liabilities outweigh current assets. There have been significant increases on the liability side made over the past year to the entries for Air Traffic Liability, Accrued Salaries, and Loyalty Program Deferred Revenue, while on the asset side, the firm's net cash position has contracted.

Total assets still easily outweigh total liabilities less equity as the firm has done a nice job during a crisis of paying down some debt, while reducing pension benefits significantly. Investors should be cognizant that while Delta has $7.933B on the books in cash (and equivalents), and $3.386B in short-term investments, the firm has access to total liquidity of $14.2B when undrawn revolving credit facilities are included.

For investors, it comes down to one question. Do you think you need exposure to the airline space? I have not had any for some time now. I had for much of 2020, and early 2021, stuck it out with Southwest Airlines (LUV) who I had seen as an excellent operator (not sure about that), and because Southwest is a domestic airline. I had held at the time that domestic travel would recover prior to international travel. Quite honestly, I am not at all sure of that at this time. International travel might just be a tailwind going forward. 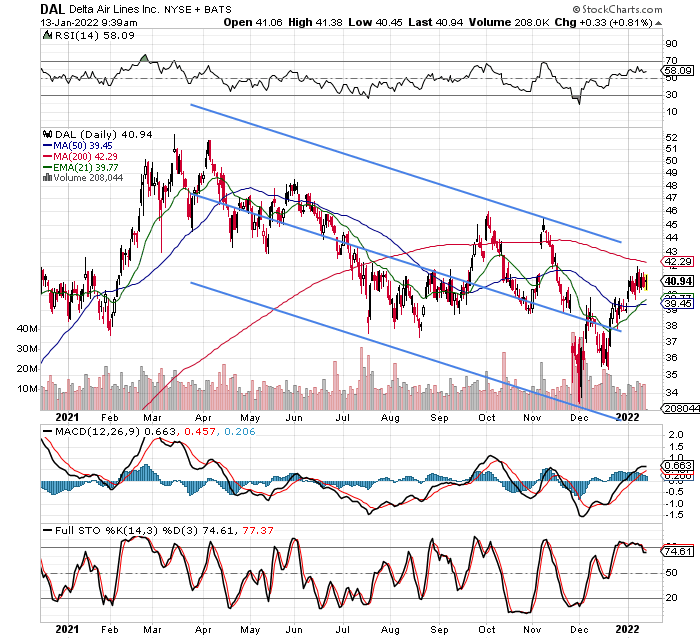 Readers will see that from the start of 2021 to the present, Delta has really just trended lower, with a lot of range bound volatility along the way. The Full Stochastics comes in this morning a little hot, but that is not backed up by either Relative Strength nor the daily MACD.

Now, readers can see that a double top reversal in October/November produced a sharp selloff. That selloff, in turn developed into a double bottom reversal with a $40 pivot that the shares are trying to break out from right now. I think that these shares can trade as high as $48 off of that breakout.

If I were long these shares, which I am not (but I am window shopping), my panic point would be a break of the 50 day line as potential support. I'd leave the 21 day out of this for now.

Get an email alert each time I write an article for Real Money. Click the "+Follow" next to my byline to this article.
TAGS: Earnings | Investing | Stocks | Technical Analysis | Trading | Airlines | Coronavirus