Naude explained that in the software world, there are winners and then there's everyone else. nCino plans on being a winner, which is why they're not worried about spending big to establish market share in their space. Naude said they have the ability to turn on and off their cash flow as needed, but for now, they are a growth company in growth mode.

When asked what they do for customers such as First Horizon National (FHN) , Naude explained that one of First Horizon's acquisitions, Iberia Bank, was already an nCino customer and they helped bring their platform to all of First Horizon. nCino replaced 10 to 15 different systems with a single operations platform.

Naude added that the pandemic hit smaller banks the hardest, but now that the economy is recovering, their pipeline for community and regional banks has never been better.

Let's check out the charts of NCNO.

In this daily Japanese candlestick chart of NCNO, below, we can see that prices had an initial rally in July and August but have been trading lower since its early September zenith. Prices made a low in early March but a subsequent retest of that low has held. This is a very small double bottom but can be the start of a period of improvement. Prices are trading below the declining 50-day moving average line. The trading volume has increased since the beginning of the year. This could be because lockups have expired.

The On-Balance-Volume (OBV) line shows an up and down pattern that generally follows the price action. Note that in early March the OBV line made a higher low and that is a small positive. The 12-day price momentum study in the bottom panel shows a higher low in momentum in the back end of March as prices made equal lows. This is a small sized bullish divergence.

In this daily Point and Figure chart of NCNO, below, we can see that prices have reached a downside price target of around $66. Prices could still head lower but a trade at $68.77 will start to improve things. 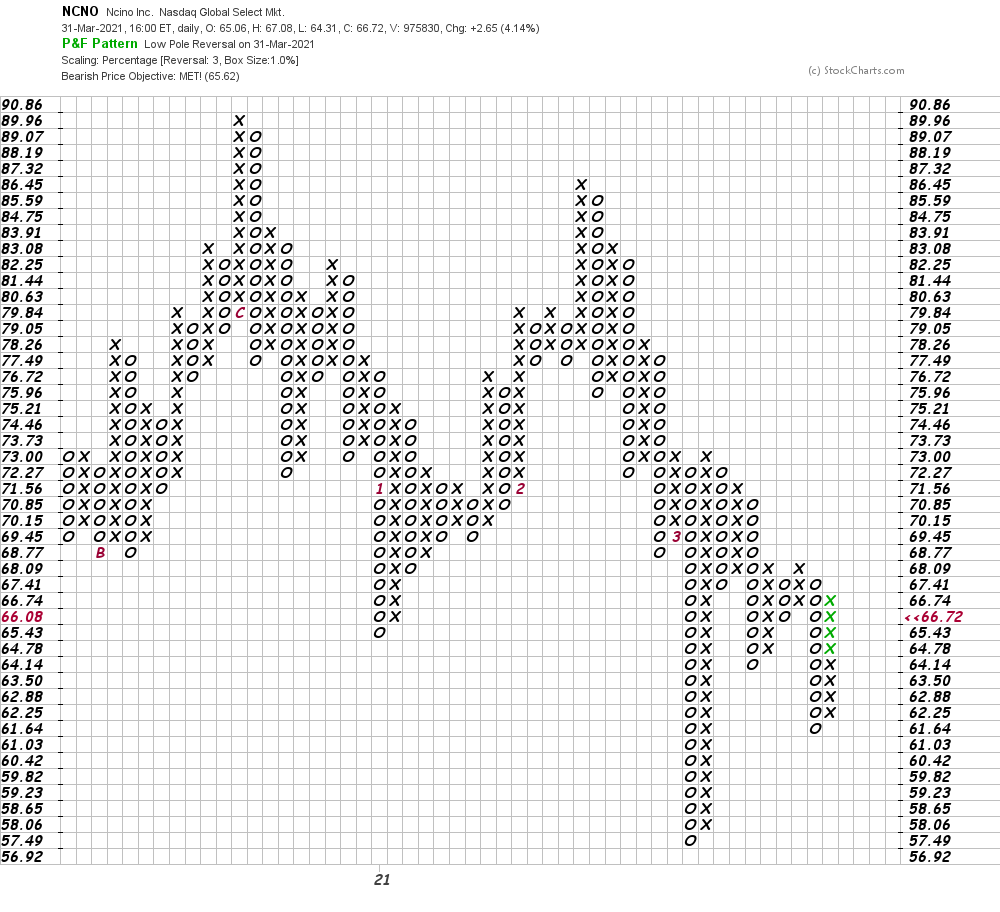 Bottom line strategy: Unfortunately I do not have enough price history to give a strong recommendation but it looks like NCNO can improve from current levels. A proper base may take a while to develop.

Get an email alert each time I write an article for Real Money. Click the "+Follow" next to my byline to this article.
TAGS: Investing | Stocks | Technical Analysis | Trading | Fintech | Software & Services | Technology | Mad Money | Executive Interview