Almost under the radar, at least as far as the financial media is concerned, NATO (North Atlantic Treaty Organization) held a two-day summit culminating today in Bucharest, Romania. The obvious focus of the meeting was the Russian invasion of Ukraine and eventual Ukrainian membership in the alliance.

NATO Secretary General Jens Stoltenberg commented, "NATO's door is open. President Putin cannot deny sovereign nations to make their own sovereign decisions that are not a threat to Russia. I think what he's afraid of is democracy and freedom, and that's the main challenge for him."

Separately, but almost simultaneously, the Financial Times reports that NATO members actually held their very first debate dedicated to Taiwanese security back in September. This debate was held by the North Atlantic Council, which is the political decision making body of the alliance.

Anonymous sources said to be familiar with the debate have said that NATO ambassadors shared intelligence concerning the threat to the independently governed island of Taiwan, and any impact that a military action or naval blockade of the island would have on NATO members.

Taiwan's critical place in the global manufacture and supply of computer chips was an obvious topic. A "western official" is quoted in the FT piece as saying, "People are moving at different paces on this, inevitably in an alliance of 30, (but) we have made a lot of progress on China... We are moving from assessing the problems to addressing them."

The deal is this. All 30 current members of NATO have agreed to spend at least 2% of their respective GDPs on national security by 2025. A third of the alliance has already met the threshold, which is up from just three members a few short years ago. External threats have that sort of impact. Finland and Sweden are both set to bring the alliance up to 32 members and both live in Russia's neighborhood. Ukrainian membership, though further out, would make 33.

Fiscal budgets will be tight as the planet moves closer to global recession in 2023. That said, in this world, defense and security are likely to remain high priorities as there are always nations (or organizations) more than willing to attempt to impose their will in unprovoked fashion upon neighbors perceived as vulnerable. The war in Ukraine is an obvious example. Even as Ukraine has defended itself well, this has been done at great cost in terms of lives, treasure, and community fabric.

They have been the backbone of my portfolios (I did not get a full year out of CACI), camouflaging mistakes made elsewhere and creating a good year in an environment that otherwise would have been difficult to manage. I have not taken profits in these names (well, except for Northrop  (NOC) twice and General Dynamics  (GD) once), nor do I expect to, going forward. Unless the geopolitical realities of the day change significantly. That would be on balance, a positive for all.

The "Down Day" That Wasn't

Given that I actually do pay some attention, I found fault with the general portrayal of Tuesday as a second consecutive "down" day for US equity markets. Sure, the Nasdaq Composite gave up 0.59% as the S&P 500 surrendered a whopping 0.16%. Sure, the Philadelphia Semiconductor Index backed up a very pedestrian 0.3%.

The fact is that the Dow Transports, Russell 2000, S&P 400, S&P 600, and KBW Bank Index all closed in the green. Heck, the Transports and the Banks both gained more than a full percentage point as United Parcel Service (UPS) and FedEx (FDX) soared and key Treasury yield spreads turned slightly less negative.

More facts? Six of the 11 S&P sector-select SPDR ETFs shaded green for the session with both the REITs (XLRE) and Energy (XLE) up more than 1.5%. Tech (XLK) finished in last, down 0.98%. Winners beat losers by almost 3 to 2 at the NYSE and by a whisker at the Nasdaq. Advancing volume took a 71.1% share of composite NYSE-listed trade and a 62.9% share of composite Nasdaq trade. Still seem like a down day to you?

There are outlets that have labeled Monday and Tuesday as consecutive days of professional distribution. "My" facts are that the higher trading volume on Monday by virtue of a half day session on Friday, does not qualify given that Monday's trading volumes were down from last Wednesday and that Tuesday was actually an "up" day in disguise. I do not yet see the professional distribution that others are thinking they see.

The Day, Month, Year At Hand

Fed Chair Jerome Powell speaks at 13:30 ET this (Wednesday) afternoon. He has tried to crack the markets nearly every time he has stepped up to the plate over the past half year or so. He may try to bury the markets again today. If he does, I dare say, that could bring opportunity. Dangerous opportunity, but opportunity nonetheless.

What we think we know is that the US economy goes into recession (or at least stalls) late Q1 2023 or early Q2 2023. Corporate earnings slow significantly in Q2 as well. Disinflation, already starting, becomes an obvious reality by then. Fed sensitivity to slow/no economic growth as velocity slows in a disinflationary environment is key to how well the US economy traverses the next 12 months.

I suspect that this FOMC may be slow to recognize that a pivot, not a pause, will be required within six months in order to best preserve an economy that will be in an overt state of decay at that point.

Nothing, for markets, is broken just yet. The October 13th reversal in trend is still fully intact. This change in trend has been confirmed and reconfirmed. 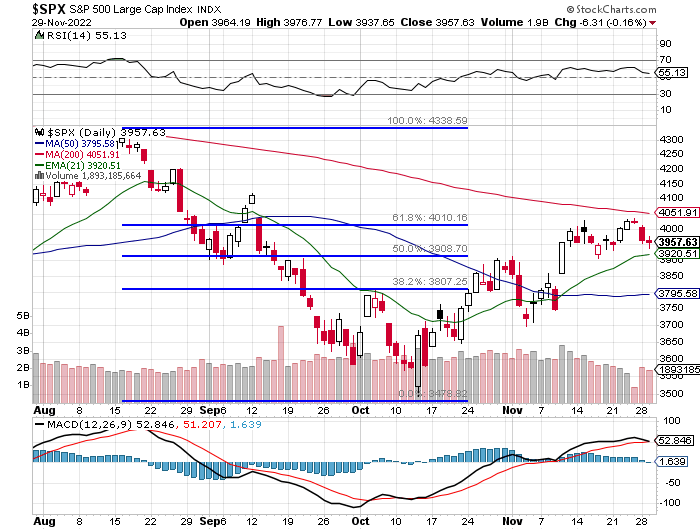 The S&P 500 remains above its 21 day EMA and 50 day SMA, though the daily MACD is standing on the doorstep of a potentially bearish cross-under. 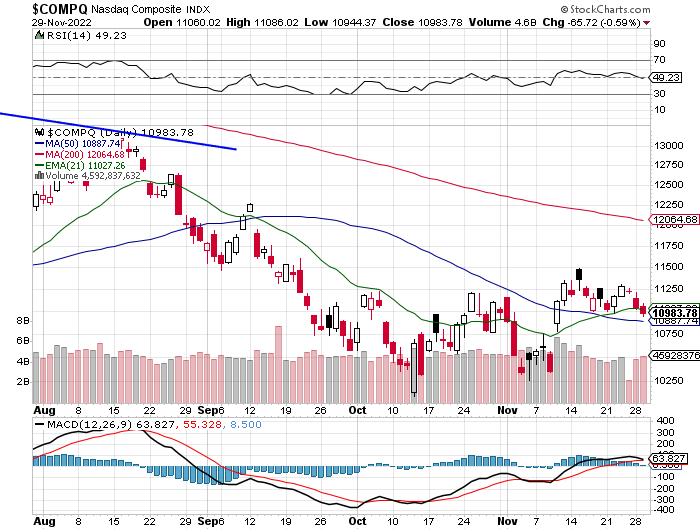 The Nasdaq Composite gave up its 21 day EMA on Tuesday, but has so far managed to hold on to its 50 day SMA. Here too, the daily MACD threatens to go bearish. 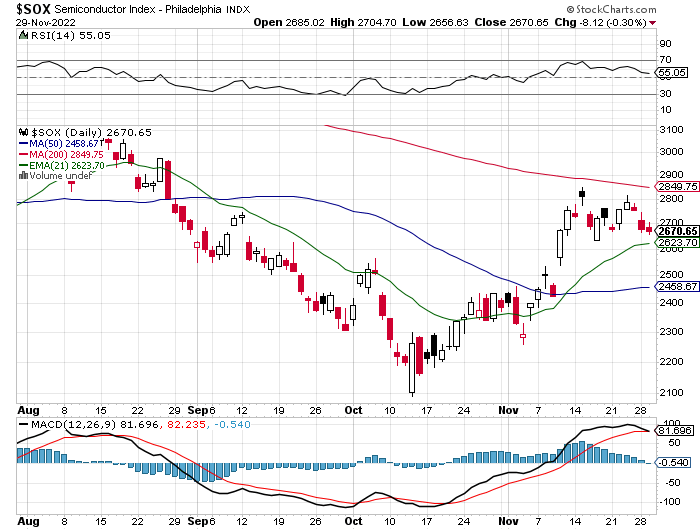 Given where the Nasdaq Composite is, the Philadelphia Semiconductor Index, despite projections for a contraction in demand for the space through 2023, stands in a better technical position than its larger kin. The SOX approaches that 21 day EMA, also with the daily MACD in a vulnerable place.

As mentioned, Powell may try to rattle markets later today, but there is a lot of wood to cut and words can not do it alone. While I see rough seas ahead for the economy four or five months down the road, how rough these seas are and how financial markets do at that time, will also depend on this man and his crew.

Remember, this year is this year, and next year is next. Investors are going to have to try to be agile. Over the past 50 Decembers, the S&P 500 has gained an average of 1.59%. The median gain for December over that time is 2.24%.

(LMT, UPS  and XLE are holdings in the Action Alerts PLUS member club. Want to be alerted before AAP buys or sells these stocks? Learn more now.)

Get an email alert each time I write an article for Real Money. Click the "+Follow" next to my byline to this article.
TAGS: Economic Data | Economy | Federal Reserve | Investing | Markets | Stocks | Technical Analysis | Trading | Defense