There are certain all-time records that not a soul cares about. A quick search for obscure records will reveal that someone once wore 42 hats while riding a unicycle. Way to go, dude. Then there are records that seem so difficult to reach that they may never be broken. Pete Rose gathered 4,256 hits in his major league baseball playing career. To place that in perspective, two players in 2019 were able to reach the 200 hit mark for the season, with 206 being enough to lead both leagues. Should a new player come up next season and reach this difficult to achieve total of 200 base hits every season for a very unlikely 21 consecutive years, Pete Rose would still hold his record. Hmm.

Then there are records that impact almost everyone, yet in real time seem so unspectacular, yet at others, so very painfully far away. Of course, one has to stick around for a little bit, but not so very long to see it from both perspectives. My mind take me back to January 1999. I remember the conversation but had to look up the year on the charts. I was in one of the several trading rooms at the New York Stock Exchange that no longer exists and was speaking with one of the more elite specialists on the trading floor at the time. His level for the Nasdaq Composite was 2222. He saw that as the top. What he did not understand (nor did I) was that this new interest in all things internet was not yet being referred to as a bubble.

Needless to say, the Nasdaq Composite would reach beyond 2500 that very month, and beyond 5100 by March of 2000. The same index after the bubble popped and lower Manhattan had been victimized by terrorism would scrape around for support above 1100 throughout the Autumn of 2002. The point is that we never really know, you and I, just how far the pendulum might swing, before moving the other way. Markets can always go further than one thinks. To top it off, markets were much slower back around the turn of the millennium than they are now. In fact, if I recall, trades were still timed in full seconds back then, not the millisecond and then micro-second timing that we would eventually move on to.

From "The Pit and The Pendulum"

"The surcingle hung in ribands from my body. But the stroke of the pendulum already pressed upon my bosom. It had divided the serge of the robe. It had cut through the linen beneath. Twice again, it swung, and a sharp sense of pain swung through every nerve."

The Nasdaq Composite has increased in value for 14 of the last 16 sessions, and for 11 straight. The broad but tech heavy index is now 35% higher year to date, which is indeed impressive though certainly somewhat misleading. Closing at 9,022, the index now stands 10.9% higher than where it had peaked in late August of 2018.

I watch the tube, sometimes with the audio on, and I do chuckle. Some financial journalists will ask some financial pros, if equity markets can repeat this year's performance in 2020? That is quite simply, the wrong question. One merely needs a basic level of sentience in order to understand that 2018's fourth quarter declines were the direct result of gross policy error, and that the timing of the trough in market pricing artificially produced cartoon like results for 2019. The real run rate for these prices is 10%, give or take over a year and a half, and while that's not bad at all, it was reliant upon not just a full halt being put to what the central bank was doing at the time, but a reversal in policy meant to undo all of the damage caused. This reversal appears to have worked like a charm.

The problem, if there is one, is that the FOMC once again, after getting through the new year, hopefully without an accident in providing short-term liquidity where needed, will have to start discussing returning monetary policy to a more neutral stance. We will have to at least hear something regarding a reduction in the current balance sheet expansion program by the March 18th policy statement.

If only it were possible to draw a straight line from one point on the chart to the next. Alas, it is not and never shall be. All investors and traders must be fully cognizant of the fact that markets go through periods of accumulation and distribution. Sometimes this is done broadly, and sometimes on a rolling basis where less diversified individuals experience increased volatility, but not the broader indices at the headline level. We are very deep into a period of broad accumulation. Timing the next round of distribution is proving very difficult, and yes, this run is quite enjoyable. Speaking just for me, I have a sell off penciled in for Monday, January 6th, but nothing at all would surprise. When it comes time to give some back will you be okay? The time to prepare mentally for all outcomes is before they happen. The 6th is simply the third trading day of the year. No science there. Anything at all could bring forward that date, or push it out.

I often enough get on my soapbox and preach... my steps toward victory. It's not just for lousy markets. It's not just for times when one faces adversity. These steps are still key, even when things go the right way. This is about managing life. Understand to Identify in order to Adapt, so that one might Overcome, then work to Maintain. One must be alert to all potential avenues of attack, escape, and opportunity. If you have made it this far, then one thing I know about you is that you deserve a seat at this table. I know that you can do this. I will not leave your side while you are afraid as long as you do the same for someone else.

Equities of nearly all types, oil, gold (most commodities), and longer dated bonds are showing some strength this week. The U.S. dollar is showing some weakness against the euro and the British pound, but not the kind of extreme weakness that would suggest that every asset class in the universe should move higher in value at the same time.

Pendulum. There is more positivity around the U.S./China trade deal, and that's driving a belief in future global demand at a time when U.S. stores of WTI Crude are perhaps reduced based on Tuesday's weekly API data. Keep in mind that algorithmic trading and dark pools have produced a high speed, far less transparent marketplace that moves on headlines. Exacerbating the condition would be the fact that "the book" of bids and offers in each stock has been reduced to what might be termed as "wafer thin" in this high speed era. In other words, my opinion is that markets are far less efficient than they had been when practiced within the confines of slower, more centralized models.

The headlines being reacted to, that I mention... are currently positive. Early feedback on holiday season retail sales are better than many expected given a significantly shorter core shopping season, and on top of that, President Trump and Geng Shuang, spokesperson for China's Commerce Ministry, are saying all the right things regarding the Phase One trade deal as China simultaneously ramps up purchases of both foreign pork and soybeans.

I Found it Interesting That...

Bank of America named Microsoft (MSFT) the firm's top software pick for 2020 on Thursday, while increasing its target price from $162 to $200, citing Azure, LinkedIn, and gaming as drivers for growth. For your information, I have been long this name for a long time. I still have a $170 price target. According to TipRanks, 27 analysts that do cover Microsoft have stated opinion over the past three months. Voila! 27 buy ratings. The average price target set by this group works out to a little more than $163 though the most recently set targets do appear to be in the $170's and $180's. The shares closed on Thursday at $158.67.

Coca-Cola (KO) publicly refuted an anonymous video on Alphabet's (GOOGL) YouTube claiming that a CBD infused beverage was in the works for the Canadian consumer market. In a statement made to Bloomberg News, the firm was quite plain... "As we have stated many times, we have no plans to enter the CBD market."

Tesla (TSLA) has confirmed that the firm has entered into an agreement with Chinese lenders for a secured term loan of up to 9B yuan ($1.29B), according to Reuters. This would be in addition to an unsecured revolving loan facility of up to 2.25B yuan. The firm plans to invest the funds into the Shanghai-based plant that is expected to deliver its first Model 3 this Monday.

I am not in this name, but Provention Bio (PRVB) does have my attention. I am not likely to jump in until I have a handle on just what is going on, and I don't see any firm news released over the past couple of weeks. The rise in price over the past few days on incredible trading volume is hard to dismiss. 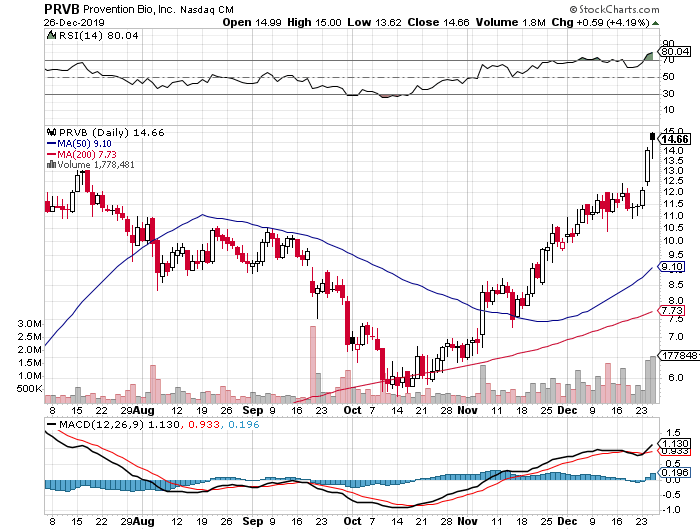 Just as hard to dismiss would be the readings for Relative Strength as well as the daily MACD. Remember what Jim says... "Can you tell me something about the company?" My thought here for traders is just be careful.

There are no significant quarterly earnings results scheduled for release today.

(Microsoft and Alphabet are holdings in Jim Cramer's Action Alerts PLUS member club. Want to be alerted before Jim Cramer buys or sells MSFT or GOOGL? Learn more now.)

Get an email alert each time I write an article for Real Money. Click the "+Follow" next to my byline to this article.
TAGS: Bonds | Gold | Investing | Markets | Oil | Stocks | Technical Analysis | Trading | Biotechnology

Seabridge Gold Is Ready to Climb Much Higher

The charts and indicators of SA are bullish.

Warning Signs Are Developing in a Two-Tiered Market

The market is displaying extreme inconsistency, which is giving fits to market timers.

The Parallels Between the Current Environment and the Dot.com Bubble Are Growing

While valuations still aren't as high as they got in 2000, a lot of recent investor behavior feels very familiar.