Twinkies and Mountain Dew fueled the early years of trading for me. I was never a coffee guy. By the looks of my waistline these days, maybe I should have opted for the coffee. What really drove me nuts though was you could never find Mountain Dew in a restaurant. Heck, you could barely find Pepsi. Despite the lack of breakthrough on the restaurant side, Pepsi has carved out a stronghold on the number two position behind Coca-Cola on the soda front, but Pepsi has a secret weapon: snack food.

It put that weapon on display with its most recent quarterly report on Thursday. PepsiCo (PEP) delivered revenues of $17.2 billion, a growth of 4.3% and ahead of analyst expectations of $16.93 billion. The company's third quarter EPS of $1.56 also came in $0.06 ahead of Wall Street's consensus. Guidance is being viewed as a positive by Wall Street. Management anticipates 4% organic revenue growth next year, however, Q4 appears light to me. Expectations are now $5.50 versus previous guidance of $5.52. That implies $1.43 in Q4, which is 4.2% below last year's results.

What we're seeing is the impact of the push for top line growth. It is weighing on the bottom line. PepsiCo discussed how a splurge on new ads for Pepsi, Mountain Dew, and Gatorade helped sales in North America grow 3.4%. There's also a shift towards healthier products, not only in snacks, but also drinks. Gatorade has a new low sugar option as well as an organic option. The latter really feels like a marketing ploy, but if it works in the short-term, then why not. 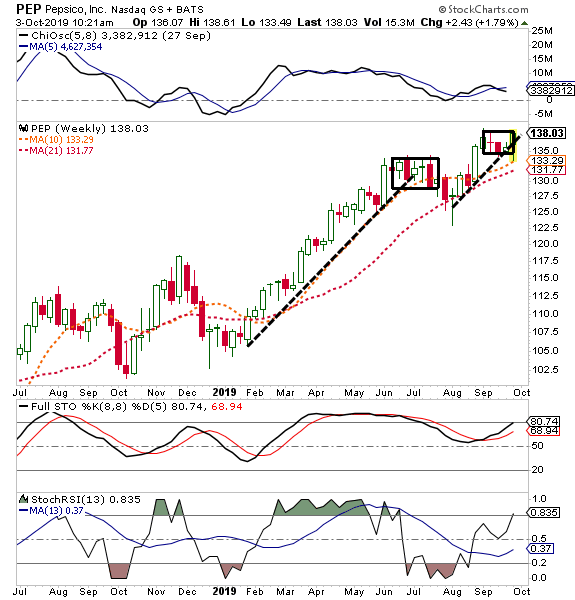 The current price action is reminiscent of the move in the first half of 2019, albeit on a smaller scale currently. For the first six months of the year we watched PepsiCo ramp higher before trading sideways over the next two months. The recent ramp has been smaller both in size and time, but overall has a very similar look. Before you get too excited expecting another leg higher out of the current bullish flag pattern, we should be students of post-earnings history. The stock doesn't like to do much for the three weeks following its earnings report. Over the past two years, that's eight reports. PepsiCo shares saw little change between its first-day post-earnings close and three weeks later. Seven of the eight times, the change was 1.5% or less with a single outlier.

A close over $140 this week (tomorrow) may give us a second outlier, and my view is definitely skewed towards a bullish outlook. I would use the 21-week simple moving average (hovering around $132) as my stope. The stock has generally found support at that level, but when it doesn't there is often a quick flush lower. That makes $133 or $132 puts as a strong strike to consider if you want put protection on the stock. In a challenging market, this is a name I'd be comfortable holding.

Get an email alert each time I write an article for Real Money. Click the "+Follow" next to my byline to this article.
TAGS: Earnings | Investing | Options | Stocks | Technical Analysis | Trading | Beverages | Food & Drink | Stock of the Day