Though I rarely write on the name, and though I have not held a position in Boeing (BA) in a very long time (I am not about to go through my records in order to figure out just how long it has been), I think about the firm often. It's no secret to readers that Aerospace and Defense is an industry that I keep tabs on, often invest in, and I have considered this name less than invest-able for at least eight months. Basically, the name has been taboo since the global grounding of the 737-MAX aircraft eight months ago.

I think of the damage in far more than micro-economic terms. I think of the damage done on the macro-economic level. To GDP. To the balance of trade. To all of Boeing's sub-contractors, and to the airlines. Yes, Boeing is that important. I consider it some kind of miracle that the larger economy has hung in there, and to a far lesser degree, so has the stock.

Lastly, I think about Boeing when I do fly. I feel the comfort in knowing that I am aboard an older version of Boeing's 737, in service since 1967, or even better the comfort of knowing that the aircraft that I am about to board has been manufactured by a competitor. That will be something in the future that Boeing and the airlines will have to deal with. Will I board a 737-MAX aircraft when the time comes? Well, I won't be among the first. You can count on that... and I have flown in some sketchy craft in my time.

Late on Friday, Boeing announced that CEO and President Dennis Muilenberg would be stripped of the Chairman's role in order to allow Muilenberg more time to focus on getting the fuel efficient 737-MAX back into service. In the news release, the board of Boeing states they would rather have Muilenberg focus on "running the company", and "ensure full support to Boeing's customers around the world." I don't think this change should surprise anyone following the company, and the fact that it came this late might be the most surprising fact that I see here. I am also not surprised that Muilenberg remains in a leadership role, as a change at this point might actually delay any return to service for the aircraft in question beyond what has already become quite frustrating for all involved.

The role of non-executive (whatever that's supposed to mean) Chairman will now be filled by David Calhoun, a former aerospace executive at General Electric (GE) . The firm also plans to add a new director to the board in the near future with a strong background in safety, who will also serve on Boeing's "Aerospace Safety Committee."

Speaking of those customers that the board so desperately wants to fully support, American Airlines (AAL) , United Airlines (UAL) , and Southwest Airlines (LUV) have all recently had to clear the 737-MAX from forward looking scheduling into January of 2020. Boeing had expressed the intent to get these planes back in the air sometime in the fourth quarter, but the FAA has offered nothing firm in the way of a timetable for lifting the ban on this aircraft. Airlines around the planet have more than an aggregate 370 of these unusable planes already in their fleets, and until all they were grounded in the wake of two fatal accidents (November 2018 and March 2019), had been expected to receive delivery of hundreds more this year.

What does that mean? In the case of American Airlines, it means 140 cancelled flights per day, totaling 14,000 canceled flights through Q4 into January, after having to cancel 9,475 flights in the third quarter that cost the airline an estimated $140 million in pre-tax income. As one might expect, Boeing reports a net order tally of -84 jets for 2019 year to date through September, obviously losing business to Europe's Airbus (EADSY) .

Convincing the FAA that the planes are ultimately safe is just the beginning of the coming complexity. Regulatory bodies from around the globe will have to be convinced that this aircraft's flight control computers are truly repaired.

Boeing reports it's third quarter results next Wednesday, October 23rd, prior to the opening bell. Consensus expectations around Wall Street are for EPS of $2.20 on revenue of $19.84 billion. If realized, this performance would amount to earnings growth of -38.5% on revenue growth of -21.1%. This would be the third consecutive quarter of contracting sales. Full year expectations are now for EPS of $3.16 versus $16.01 for FY 2018 on revenue of $83.06 billion, which would be -17.9% year over year. I would expect that what is said around the numbers reported will likely matter far more than the numbers themselves. As reported by Martin Baccardax in his piece at TheStreet this morning, Credit Suisse analyst Robert Spinarn announced last week that he was modeling EPS of just $1.35 and free cash flow of -$1.2 billion for the quarter. 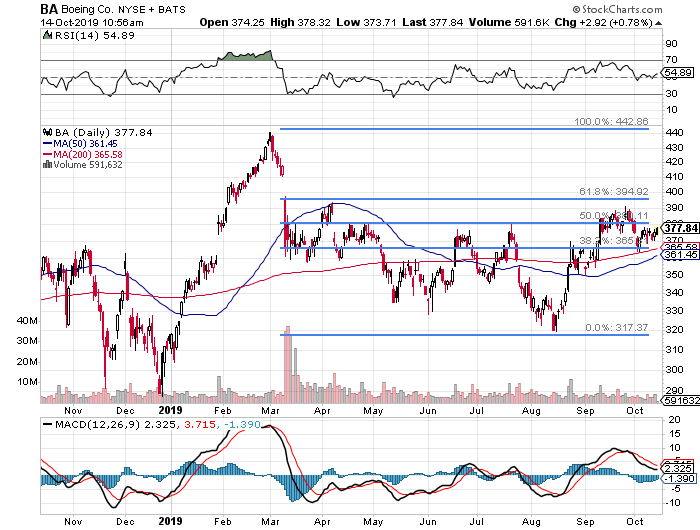 The chart illustrates incredible resilience on the behalf of the shareholder. The shares, though well off of their pre-grounding highs, are still up 17% year to date. The shares have met repeated Fibonacci resistance at $380 and at $395, yet refuse to give up the key moving averages for very long. I would have to say that the chart looks like it wants to break out, and if you are a shareholder, I truly hope it does. You will enjoy that victory, after all of your perseverance. You'll just be going that road without me. That does not mean that I have no ideas rattling around in my cranium.

Notes: The spread will run the trader $480. Should the shares decline post-earnings to levels below $262.50, profit maxes out at $1,020 net. The trader would allow this cap on profitability in exchange for the reduced net debit as a method for controlling expenses in the case of an opposite reaction in the share price.

Get an email alert each time I write an article for Real Money. Click the "+Follow" next to my byline to this article.
TAGS: Investing | Options | Stocks | Technical Analysis | Trading | Aerospace | Airlines | Stock of the Day