Before we even approach Oracle's (ORCL) immediate past, as in the quarter that the firm reported on Thursday evening, we have to address the present situation that the firm finds itself in, and where it needs to go in terms of C-level management in the wake of the passing of co-CEO Mark Hurd back in October.

Oracle Chairman Larry Ellison was quite clear on Thursday. You will recall that at the time of Hurd's death, Oracle had announced that there would be a search for a new co-CEO to work with co-CEO Safra Catz. Hurd and Catz had worked well together in that capacity for four years. Ellison told us, "Let me make it very simple, how is our search going for the news, for a second CEO? We don't have one. We have no plans for having a second CEO." Ellison goes on to mention executive level personnel that could eventually rise to the status of chief executive, but that the plan is for Catz to fill that role alone.

As far as we know, Oracle is still on track to open 20 or so new cloud data centers by the end of 2020, increasing the total to roughly 36. To get this done, the firm expects to add 2,000 jobs in total spread between Seattle, San Francisco, and globally as well.

For Oracle's fiscal second quarter, the firm posted adjusted EPS of $0.90, which beat the street by a penny. Sales hit the tape at $9.61 billion. That was a slight miss, and good enough for year over year growth of less than a percent. Cloud Services and Licence Support, the firm's largest segment, produced revenue of $6.811 billion, a 3% increase over the comparable quarter last year. The firm's other three, albeit smaller units (Cloud License and On-Site License, Hardware, and Services) all printed in year over year contraction.

In response to this performance, CEO Safra Catz stressed that within the largest unit that Fusion ERP revenues grew 37%, while NetSuite ERP revenue increased by 29%. For those not familiar ERP in software stands for Enterprise-Resource-Planning, and the addressable market for this space is projected to reach the mid $40's in billions of U.S. dollars by the year 2021, so this matters. Catz goes on to say that she believes that the firms growth here is sustainable into the coming year.

It is key to note that while quarterly revenue has largely flat-lined for Oracle since early 2018, that (adjusted) profitability has continued to grow at a double digit rate in percentage terms as operating margin has expanded to 33%.

The firm is competing for the business to business cloud. Obviously, this is a tough space, largely dominated by the likes of Amazon (AMZN) Web Services, Microsoft's (MSFT) Azure, and of late, the Google Cloud by Alphabet (GOOGL) , a firm that also recently decided to go forward with a single CEO, after years of operating with a co-leadership arrangement. 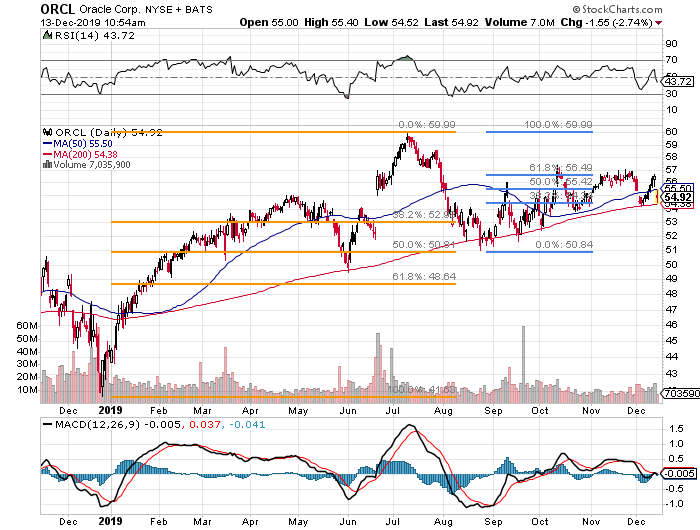 I see this chart as extremely messy. However, there are patterns. After the rally over the first half of the year, support was to be found at a precise 50% retracement of that move, Then, on the rally that came after the summer beat down, resistance was hit at a 61.8% retracement of that move. Even more interestingly, is the support that these shares have enjoyed at the 200 day SMA (now $54.38) on five successive tests of that level since August. That line is where I want the shares.

Notes: The trader in this example has agreed to cap profit at $60 by expiration (profit: 11.8%), in exchange for increased equity exposure at the $50 level until expiration. Worst case... the trader winds up long 200 shares of ORCL at a net basis of $51.82 in March with the shares trading below $50.

Get an email alert each time I write an article for Real Money. Click the "+Follow" next to my byline to this article.
TAGS: Earnings | Investing | Options | Stocks | Technical Analysis | Trading | Technology