Somehow... today, even with financial markets closed for the day, does not feel like a day off. State funerals have that effect upon me. As I watched my television, I held back the emotional reaction that always comes when I see the flag draped over a coffin. As the elder President Bush had served in World War II as a naval officer, I can only be grateful that the band outside the United Sates Capitol did not play "Eternal Father". For if they had, my wife would have surely seen me cry, something she has only seen once in the 32 years that we have been "going steady", and that was by accident.

Equity markets took a long leap off of a short pier just before lunch on Tuesday, then throughout the afternoon, seemed to feel around for support before the S&P 500 closed at a big fat round number... 2700. The meltdown had been caused of course by the inversion of the 2/5 Treasury spread and the collapse of the 2/10 spread to an extremely narrow span of 10 basis points. You all know how off base I feel that the Fed has been on policy, I write on that often, and likely will again. Therefore, I will not waste your time on our "day off" with more of my angry drivel. Where to hide? I will have another piece on the site sometime today dealing with that topic.

Equity index futures were trading higher this morning. Is that meaningful? Perhaps. At least China has now acknowledged the 90 day trade war truce at this point. Something important of note that does not seem to be getting a lot of air time in the media is threat of the fabled "death cross". For those uneducated on just what this technical indicator actually is, it refers to the movement of the 50 day SMA (simple moving average) across the 200 day SMA. This can be for any index or security. A downward crossing, known as the "death cross", is thought to be a bearish signal. The Nasdaq Composite, the Russell 2000, and the Dow Jones Transportation Average are all already there. A move in the other direction is known as a "golden cross" and is taken as a bullish signal. 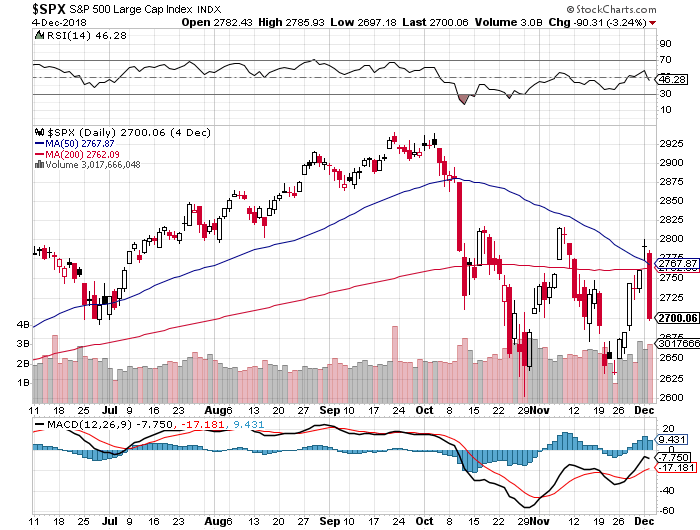 As you can see, it's getting pretty close. The more time the index spends at the current level obviously will have more impact on the 50 day than the 200 day. The crossover, whether you believe in technical indicators or not, will provide algorithms written for program traders who do. So, stick that information in the back of your mind as you proceed along this dangerous road that we all now travel together. The Dow Industrials are not yet close to a death cross, but then again, that index represents just 30 stocks.

I have long relayed thoughts on why I never invest in Facebook (FB) , and no longer invest in Alphabet (GOOGL) . My opinions on those two names are based on management, and of course as management at the two firms evolves, so may my opinion. After all, these are solid businesses both in existence and under development that I would like to get behind at both firms.

Now, I have long held a core position in Amazon (AMZN) , while also actively trading the name short-term outside of that position. While the core has suffered, the short term trading in this name has helped to somewhat mask the decline in the share price in terms of my P/L in that name. Long term, I believe in Amazon. Otherwise, I would only trade the name short-term. The firm is aggressive. That is a matter of record. Just look at the revolution caused by this name across the retail landscape, or the early adoption of using the cloud for business purposes. Now, suddenly the transports will come under fire. Not that this was unexpected. I think we have all known that this exorbitant cost of doing business had become a bur under the saddle for Jeff Bezos. The share price was slapped around pretty hard in Tuesday trade as President Trump suggested that the U.S. Postal Service raise prices for shipping packages.

In the end, I think that the largest customers end up with the leverage. Either Amazon will be able to drive prices lower, not higher (and margins thinner) for the firms in the delivery services industry such as FedEx (FDX) , or UPS (UPS) , or they will deliver these packages themselves, and we are not just talking about the last mile. Once they do this for themselves, and injure the competition... then they will offer delivery as a service to others, or at least threaten to do so. Pretty smart.

I also trade Netflix (NFLX) from time to time. I think this firm is going to have issues going forward. I know that subscriber growth is there. I think as Disney (DIS) , Walmart (WMT) , Amazon, and AT&T (T) , as well as others, either move into the space or expand their involvement while drawing in their own content, that both market-share and price point become problematic for Netflix going forward.

My thoughts on this were brought to light on Tuesday as the news covering the TV show "Friends" hit the tape. Owned by AT&T, many thought this show would be pulled from Netflix as AT&T prepares it's own streaming service. For one last season of exclusivity, AT&T was able to extort $100 million from Netflix for a show that had been costing NFLX just $30 million per year prior. The choice is clear. For content owned by others, Netflix will have to pay up in a huge way, and then after that... no promises as those content owners go to market with their own services. Can you say margin compression?