No doubt that broader equity markets took a kidney punch on Monday. Video game stocks underperformed those broader markets if one can believe it. In the wake of mass murders over the weekend that occurred in El Paso, Texas, and Dayton, Ohio, President Trump addressed a number of related issues. Among them, the president called for an end to the"glorification of violence" in video games. Down went Activision Blizzard (ATVI) , down went Electronic Arts (EA) , and down went Take-Two Interactive Software (TTWO) , all experiencing declines in a range from 4.6% to nearly 6%.

This came after a manifesto written by the shooter in El Paso had become public where he had referred to "living out his super soldier fantasy on 'Call of Duty.'" "Call of Duty", by the way, is an Activision Blizzard title. That statement in the manifesto led Texas Lt. Gov. Dan Patrick to suggest the possibility of the federal government taking some kind of action against the video game industry on national television on Sunday.

After the negative publicity, and after a wild selloff had struck the marketplace, Take-Two Interactive went to the tape on Monday evening with their fiscal first quarter financial performance. The firm reported adjusted EPS of $0.27, a serious beat. Net bookings for the quarter amounted to $422.2 million, a year over year increase of 46.4%, and itself another serious beat. The outperformance was driven by a number of titles many readers will be familiar with such as, "Grand Theft Auto Online", "Grand Theft Auto", "Red Dead Online", "Red Dead Redemption 2", "Borderlands" and "NBA 2K19".

Going forward, the firm increased guidance for both the current quarter and for the full year. The firm expects to see fiscal Q2 net bookings of $860 million to $910 million. Analyst consensus is toward the low end of that range at $864 million. For the full year, the firm has increased these net bookings to $2.6 billion-$2.7 billion from previous guidance of $2.5 billion-$2.6 billion. This should produce GAAP EPS guidance to a range of $3.71 to $3.96, up dramatically from $3.39 to $3.65. This data is now expected to produce operating cash flow of more than $450 million. Title releases for the ongoing quarter will include "Ancestors: The Humankind Odyssey", "NBA 2K20", and "Borderlands 3."

I count at least eight analysts representing a wide array of sell-side firms this morning that have either initiated or reiterated a "buy" rating or their firm's equivalent. At least five of these eight are rated four or five stars out of five, and new or reiterated price targets range from $124 to $150. 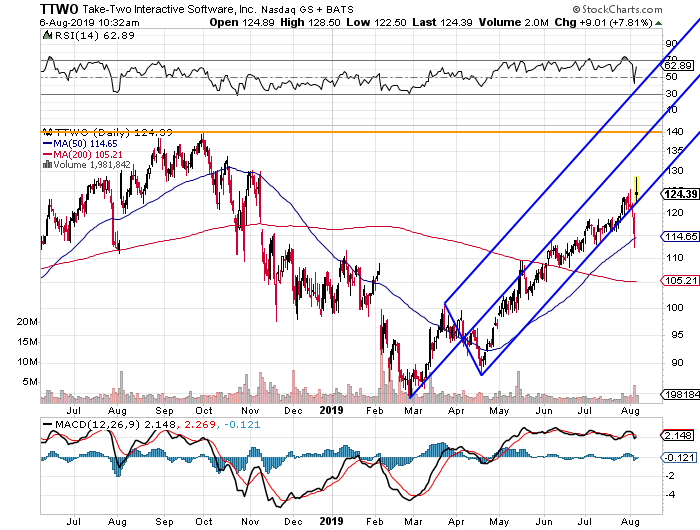 At least on the charts, the analyst are not too far off. The name could eventually reach $140 before traffic gets real heavy. I don't know what's more important. The fact that the share price quickly regained the lower trend line of the Pitchfork, or that the shares "sort of" found support at the 50 day SMA. Both are positive developments.

The shares are investible. Of that there is no doubt. Do I buy the shares on a day that they are up 9% after a day that they were down 5%? Probably not. There is however more than one way to get things done. An investor who missed Monday's prices could (in minimal lots):

Bottom Line: The investor takes home $575 in premiums. The shares go higher, that's found money. The shares tank over the next six weeks, the worst case is a long position of 200 shares at a net basis of $114.63 with the shares trading below $115. In other words, the investor "got in" at yesterday's discounted pricing.

Note: A trader insisting on an equity position could also sell September 20th $140 calls against that position in order to reduce net basis by something. At the time of this writing, the equity goes for about 126.20, and such a sale would bring in roughly $1.75.

Get an email alert each time I write an article for Real Money. Click the "+Follow" next to my byline to this article.
TAGS: Investing | Options | Stocks | Technical Analysis | Trading | Digital Entertainment | Gaming | Stock of the Day