Your old pal Sarge has been exhibiting some strange behavior of late. I wrote to you a while back that I did not like the airlines, but if I had to own just one, it would be Southwest Airlines (LUV) . I am buying that name. In fact, I added overnight. I also told you that I was done with the banks, but that I was warming to JP Morgan (JPM) ahead of earnings. I have since added JPM. No. No, what? I still have zero direct exposure to energy. Perhaps some day. If they get a little greener and still pay those nice dividends after a couple of rounds of probable consolidation.

Late Tuesday, And So On

Tuesday afternoon, President Trump had pulled the rug out from under the markets, when he tweeted that he was ending negotiations between his administration and the Democrats in the House led by Speaker Nancy Pelosi. You saw what happened. I could not understand the move at the time, unless it was a negotiating ploy. I wrote as much in Market Recon overnight. Half a day later, it appears that the president does have some kind of plan here. In the Recon, we suggested that the president use the executive behavior of the office to at least target unused funds left over that had been provided in the CARES Act to fill needs in the most desperate parts of the economy.

Late Tuesday, President Trump tweeted, "If I am sent a Stand Alone Bill for Stimulus Checks ($1,200), they will go out to our great people IMMEDIATELY. I am ready to sign right now. Are you listening Nancy?" A few hours later, the president got more aggressive. Policy by Tweet? I kid you not, but we are used to this by now.

The president tweeted, "The House & Senate should IMMEDIATELY Approve 25 Billion Dollars for Airline Payroll Support & 135 Billion Dollars for Paycheck Protection Program for Small Business. Both of these will be fully paid for with unused funds from the Cares Act. Have this money. I will sign now."

I was looking for that one. A fastball down the middle. Bought some Southwest on that one. Smart move? I'll let you know down the road a bit. My thinking? If he can save the airlines for now, Southwest has no international presence to speak of, and if travel ever comes back in numbers... it will come back domestically long before it does globally. Just a kid with an idea.

No, not the stock. The firm's airline analyst Jamie Baker upgraded a number of airline stocks. Both United Airlines (UAL) , and JetBlue (JBLU) were moved up to "Overweight", which is JP Morgan's equivalent of "buy". Baker moved Spirit Airlines (SAVE) "up" to a "neutral" rating. My pick? You may want to sit down. Baker actually downgraded Southwest Airlines to "Underweight" from "Neutral." "Underweight" means "sell" in the real world. Baker does this even though he acknowledges that the firm has ample liquidity to endure this crisis. Baker also acknowledges that "Southwest possesses the deepest track record of profitability, the highest quality balance sheet, and a fiercely loyal customer base."

Yes, you read that right. Baker downgraded the stock that I have been accumulating, and does so while listing all of the reasons on top of a domestically based business model that made me want to get long the name in the first place.

Now, to be fair, maybe Baker is right. Maybe I am wrong. Now, perhaps this is wrong, and skewed because Baker does track the airlines and that has been a tough game. The fact is though that Baker is rated at less than one star by TipRanks (out of five). TipRanks places Baker in 6,597th place of the 6,976 analysts tracked by the service, and in 13,957th place out of the 14,619th overall experts followed by the service. Fact is that this analyst's success rate is not among the best. I am not taking a shot at anyone here. I am telling you to not take this downgrade as law just because it came from a prestigious sell-side operation. Do your own homework.

Earlier this week, Southwest CEO Gary Kelly asked the unions involved for "temporary" pay cuts and other concessions in order to avoid a headcount reduction. My kind of guy. Back in the wake of the "Great Recession" the firm I was working for cancelled all bonuses, and cut base salaries by more than 40%. This "deal" we were offered or a third of us would be let go. You look at every face in the room, and you might think that you might not be among those cut (then again, maybe your spit does stink), but you know who likely will lose their jobs, and you know their families... and you take the deal. 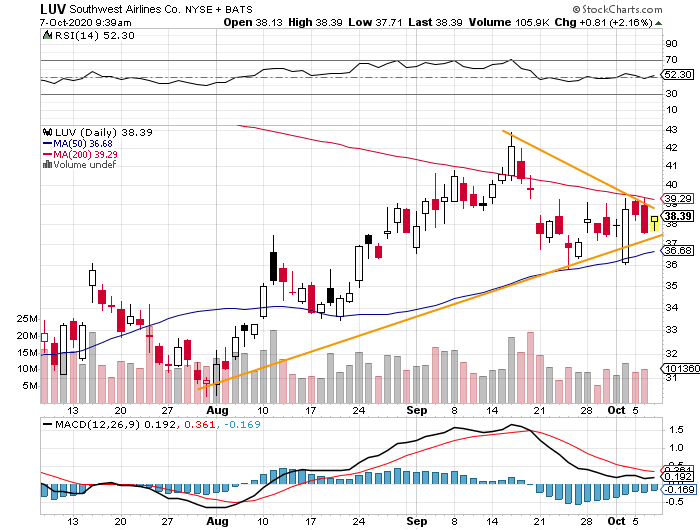 My position in Southwest is obviously speculative for now. Trend lines are closing in on one another, as that 50 day SMA sneaks up on the 200 day SMA. This stock in my opinion is going to move violently in the short term. I buy more down to $36. I think I can get paid $47 for these shares on a breakout. For now, it's just a trade.

Get an email alert each time I write an article for Real Money. Click the "+Follow" next to my byline to this article.
TAGS: Economy | Investing | Markets | Stocks | Technical Analysis | Trading | Airlines