The Walt Disney Company (DIS) reported the firm's fiscal third quarter results on Thursday evening. The firm had an excellent quarter all things considered. Disney posted adjusted EPS of $0.80, and GAAP EPS of $0.50. By either metric, earnings easily beat Wall Street expectations, and printed well above last year's (not exactly) comparable $-2.61 and $0.08, respectively.

Disney breaks its many business lines down into just two reporting segments. The larger of these two is Disney Media and Entertainment Distribution. This segment provided $12.7 billion in revenue toward that $17.02 billion whole, which was growth of 18% for the unit. The stars of this unit are Disney's growing streaming services, and Disney's TV/Cable networks that had been, prior to the pandemic, in an industry-wide cord-cutting decline.

The streaming services, or for the most part what the firm calls "Direct to Consumer", includes Disney Plus (Disney Plus, Hotstar in India, and Star Plus elsewhere) where the firm surprised with growth from 103.6 million subscribers one quarter ago to an above consensus 116 million. Remember, key competitor Netflix (NFLX) surrendered 430K North American subscribers this reporting season. The streaming services also include Hulu where subscribers increased to 42.8 million, and ESPN Plus where subscribers increased to 14.9 million. Direct to Consumer revenue alone increased 57% to $4.3 billion, producing an operating loss that narrowed 53% to $293 million.

Revenue at Linear Networks grew 16% to roughly $7 billion. The unit comprises the TV/Cable networks that include ABC, ESPN, Disney Channel, FX, and National Geographic. Operating income for the entire segment fell 32% due to increased programming and production costs to $2.026 billion.

The smaller (especially during COVID) segment known as the Disney Parks, Experiences and Products unit posted revenue of $4.341 billion, up 407%. This unit includes everything from domestic and international theme parks to the cruise line to lodging to product sales, and produced operating income of $356 million, up from $-1.878 billion one year ago.

As readers can see, cable television is basically subsidizing through cash flow... the many parts of the firm that are either still growing into what they will eventually become, or are being forced to still operate below capacity thanks to the pandemic.

CEO Bob Chapek said, "We ended the third quarter in a strong position, and are pleased with the Company's trajectory as we grow our businesses amidst the ongoing challenges of the pandemic. We continue to introduce exciting new experiences at our parks and resorts worldwide, along with new guest-centric services, and our direct to consumer business if performing very well, with a total of nearly 174 million subscriptions across Disney plus, ESPN Plus, and Hulu at the end of the quarter, and a host of new content coming to the platforms."

The balance sheet remains in solid shape. Cash is down almost $2 billion over nine months, current assets are down by less. Goodwill stayed where it was. Other net intangible assets were reduced. Current assets are still 18% larger than current liabilities. Borrowings have been reduced a bit. Total assets nearly double total liabilities less equity. 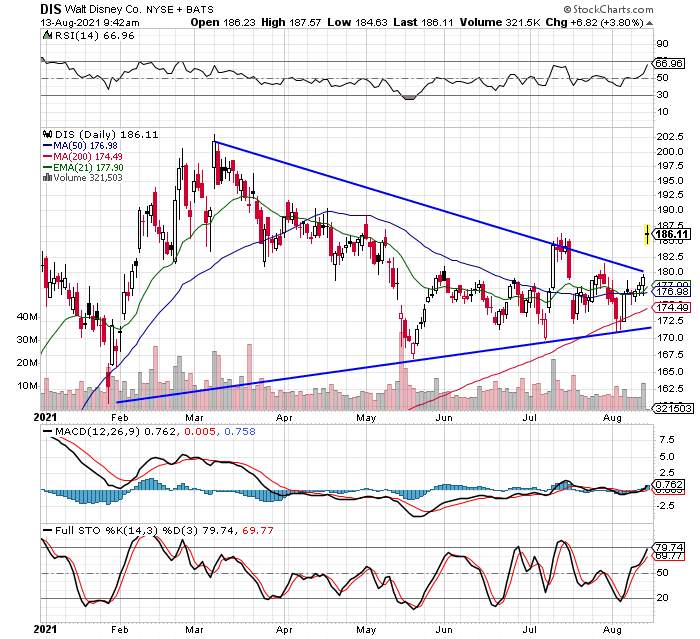 I have to admit that I did not see this giant year to date closing pennant formation until this morning. I did sense a sharp move coming, however. That is why I cut my long in half ahead of this earnings release. I am glad that I did hang on to half of my shares. I would like to buy back the portion sold, but not today, not on this spike with this newly created gap staring in our face. Both the RSI and Full Stochastics Oscillator are close to signaling a technically overbought condition.

I like Disney, and I want to re-establish my full sized long. That's why my plan will surprise a few readers.

- Sell the balance of my DIS long on this morning's pop... and

Either buy back the shares when the stock fills this morning's gap (whenever that is), or...

Note: The intent is to roll the put sale over weekly or monthly as we wait. The intent is to buy back the shares at the same level, but to get paid to wait, thus reducing net basis along the way.

Get an email alert each time I write an article for Real Money. Click the "+Follow" next to my byline to this article.
TAGS: Investing | Markets | Stocks | Technical Analysis | Trading | Movie Production | Movies | Resorts and Hotels | Television Production/Distribution | Sports