The Happiest Place on Earth. If there is a large cap business more reliant on discretionary income, I suddenly find it hard to think of one. Simply think of just what it is that the Walt Disney Co. (DIS) does and does well. Nearly every one of the firm's businesses have been put on the shelf, globally... as governments around the world have had to put a halt to non-essential commerce in response to the spread of the novel coronavirus that causes the infection now known as Covid-19. Oh, and this is no tale of victory here. I am long a few shares of Disney, though just about 15% of what I had thought would be my position size upon entry. I am no stranger to the shares, nor am I any kind of stranger at all to the firm's regular businesses.

These shares I have traded for years, and traded them well. As the shares collapsed to the sub-$120 area and seemed to put up a fight... I thought that would be my chance, so through baby steps I entered. It did not take long for this trader to realize that he had jumped the gun. So, there we stand, a nasty mark on the P/L, but small enough to camouflage if I don't screw too many other holdings up.

Feel like going on vacation any time soon? Oh, you do, do ya? How about waiting in line at a theme park for a crowded attraction? Hmm. Willing to pack on into a movie theater for the latest Star Wars flick? The movie studios have been Disney's home run hitters in recent years. Even once in a while things do open up a bit... maybe, just maybe, you'll wait until it shows up on cable, or your favorite streaming service. Oh, speaking of cable. Even in decline, ESPN has been a top performer relative to other networks. See the game last night? No, you didn't. Neither did I. The 3rd round of the 2014 NCAA basketball tournament can hold my interest. Only kidding. No, it can not.

Oh, there's so much more to Disney. Themed, fanciful lodging in a family environment. Hmm. Then there's the cruise lines. Honestly, and maybe I am alone on this... I can't even imagine voluntarily stepping foot on a cruise ship, perhaps ever again. Just the thought of being stuck at sea with an illness on board maybe for weeks. No thank you.

Bright spot? Sure. The streaming services. Disney Plus expanded into India on Tuesday, and then into many Middle Eastern countries this morning. The combination of Disney Plus and Hulu (controlled by Disney) is getting hotter, though former CEO, now Executive Chairman, Bob Iger (who just voluntarily forfeited his salary for the year) has told us that Disney Plus remains years away from turning the corner of expected profitability.

On Thursday morning, nearly forgotten after the Department of labor printed more than 6.6 million initial Jobless Claims for the week, it was Guggenheim analyst Michael Morris who made headlines. Morris downgraded the shares from "Buy" to "Neutral", while reducing his price target from $160 to $100. For his part, Morris notes that perhaps the market is "under-appreciating how long the parks and resorts business may be under pressure relative to prior expectations." He added that the name would be "more susceptible to downward estimate revisions than peers in a prolonged slowdown and less likely to see quick upward revisions in a recovery." He does make sense.

In addition, this past Monday Doug Mitchelson of Credit Suisse left a "Buy" rating on Disney, but reduced his target price to $140 from $150, while slashing estimates for both earnings and revenue. Mitchelson, who is an extremely highly rated analyst, comments on the lack of sports and/or entertainment content production as well as closed theme parks as reason for his cuts. Then, Wednesday, Benjamin Swineburne of Morgan Stanley, who is also highly rated... maintained his "overweight" rating on the name, but lowered his price target from $170 to $130. He also lists the impacted businesses... parks, resorts, retail, movies, sports. 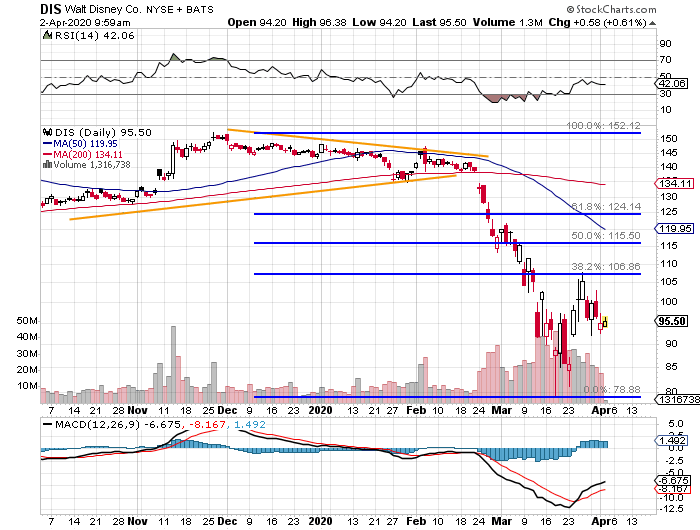 Okay, gang... this is my plan. As I have explained above, I am managing a position that I consider to be a mistake, so we may or may not be in the same boat. What I see above is a downward break out of a closing pennant/flag pattern. After bottoming at the $80 level, the shares hit a wall at a standard 38.2% Fibonacci retracement of the sharp selloff.

The good news would be that should there be any hint of a flattening of the viral curve, that Disney is a name that both Wall Street and retail investors like to invest in. It's popular. It's fun. It's family. The negative for me would be the obvious. That a prolonging of conditions being what they are makes this stock very ordinary at best. In the long run, content will matter and that includes sports, movies and better integration of the assets purchased from Fox.

Some businesses will come back more slowly. The theme parks in China already had to re-close. My thoughts on shares of DIS are this... Right here? I sit on my hands. The range that has been created will be my guide. I peel off an increment at $107, if I see it again, and go down to 10% of a position, and that low of $80? We see that again, that's my panic point.

Here's an idea. Let's suppose a retail investor was long 100 shares of DIS and unsure of how to protect him or herself within the confines of that already spoken range. Keeping in mind that Disney reports the current quarter on Friday May 8th, after the close, that investor could...

Note: The entire trade reduces net basis by $3. This trade caps the out at par by may 15th, but in allowing that, the investor has more than paid for downside protection beyond the $80 level by expiration.

Get an email alert each time I write an article for Real Money. Click the "+Follow" next to my byline to this article.
TAGS: Investing | Options | Stocks | Technical Analysis | Trading | Media | Resorts and Hotels | Analyst Actions | Consumer Discretionary | Coronavirus

McKesson Could Move Higher So Trade It From the Long Side