Oh, how I have waited. I have liked Target (TGT) for some time. I have thought very highly of the way that CEO Brian Cornell has simply changed the way consumers think about this firm as he set about to remain beyond competitive relative to long time rivals Walmart (WMT) , and e-commerce champion Amazon (AMZN) . Twice I played Target from the long side in 2019. Both times, the trades worked to my benefit. The last time that I played this name, it was from the short side. Though I still liked Target, such is the life of a trader, and I was lucky to get out of that position with most of the shirt on my back. I have waited for a pullback, so that I might get long the name once again. I waited a long while. Now... voila! We have that pull-back. So tough guy... what now? You gonna act now, or just keep thinking about it. Let us explore.

Not Quite Meeting Expectations

There was that point in time, last week to be exact, that investors probably thought that maybe those retailers that can benefit from distancing themselves from the mall, make use of greater scale, and grow their digital businesses could skirt the alarming comp sales posted for the holiday season by a number of competitors. While Kohl's (KSS) may have put a dent in such faith, seasonal outperformance by Costco (COST) probably renewed that faith.

Target shocked the believers, and not in a good way, on Wednesday morning as the firm posted comparable sales for the holiday season at growth of 1.4%. Such growth pales in comparison to the 3.8% expected across Wall Street, and the 5.7% growth put to the tape by the firm a year prior.

Digging into the data, the numbers do appear to be quite the mess. Toy sales printed flat from last year, which is troubling as Target had been expected to become a leader in that space after opening a number of Disney (DIS) shops within some stores, and after the liquidation of Toy R Us. Sales of electronics printed at -6% at Target for the holidays, despite data provided by Mastercard (MA) Spending Pulse that shows overall spending on electronics and appliances increased by 4.6% for the season. Sales of home related products told a similar, though less pronounced, negative divergence at Target from the national trend.

There were bright spots. Apparel and beauty both did quite well, as the grocery business held its own. E-commerce did very well, at growth of 19%, supported largely by consumers making use of both same day delivery and curbside pickup options offered by the chain.

What It All Means

On the now concluded holiday season, CEO Brian Cornell was succinct: "While we knew this season was going to be challenging, it was even more challenging than we expected." Moving forward, Cornell was optimistic... "Because of the durability of our business model, we are maintaining our guidance for our fourth quarter earnings per share." 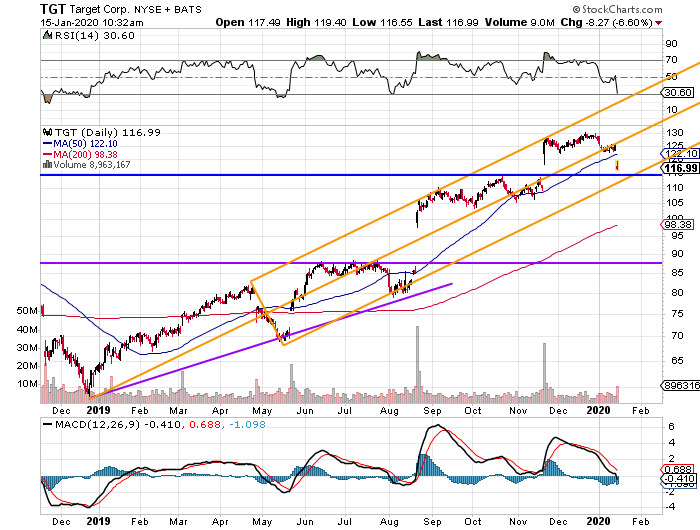 Safe to say that the positivity around the stock's breaking out of the ascending triangle that we had discussed earlier in the year has come to an end? Yeah, I think so. What is key right now is that these shares, having failed to hold either the 50 day SMA at $122, or the central trend line of the Pitchfork, is that these shares now hold above October resistance just below the $115 spot on your chart.

No, I do not expect to "get after it" today and pluck down some cash for some equity in Target. What I am going to do, is expose myself to downside equity risk over time, and get paid to do it. Target is expected to report in early March. This is my plan (in minimal lots)...

(Amazon, Kohl's, Disney and Mastercard are holdings in Jim Cramer's Action Alerts PLUS member club. Want to be alerted before Jim Cramer buys or sells these stocks? Learn more now.)