Home Depot reported a solid quarter with earnings per share of $2.27 versus expectations of $2.19. Revenue finished in line with expectations. Comp sales in the U.S. grew by 3% with overall comp sales up 2.5%. That's not a terrible number especially seeing some of the other retail results. The issue for me comes in the form of full year guidance.

Management projects $10.03 for FY19 which is six cents shy of the $10.09 current estimate. Unfortunately, when you factor in that the company just surpassed Q1 estimates by $0.08, the short fall projection becomes a bit more concerning. While it is true 2019 is only a 52-week year versus a 53-week for 2018, it isn't like this information was unknown or not already factored into projections.

The flat move today is not much of a shock. Home Depot shares have failed to close with a change greater than 2.65% for THIRTEEN straight quarters. It simply isn't a quick reactor. The good news for bulls is shares have tended to drift higher over the next three weeks. Although we've seen HD move lower a couple of times over the past three years, the move have been somewhat subtle outside of November 2018. Much of that was driven by the overall market though, not something company or even sector specific. 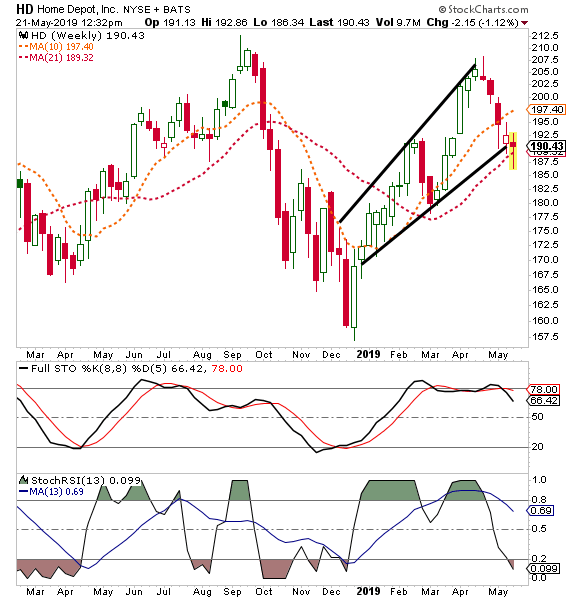 In terms of the technical picture, Home Depot is walking a thin line. While Lowe's was breaking out from a bullish flag, Home Depot appears to be breaking down from a bearish megaphone pattern. Bulls need to rally shares to the $192+ area to maintain clean support. Secondary support around $190 in the form of the 21-week simple moving average (SMA) does permit a small amount of room for "error," but there is very real risk of a 5%-10% downside move over the next two quarters.

I would stay on the sidelines with Home Depot and look to Lowe's if you are considering the space. That being said, I think a simple avoidance of the home improvement space is the way to go unless Lowe's report tomorrow reverses the view Home Depot provided on Tuesday.

The charts are still pointed up - for now.