For days now, the Renewable Energy Equipment industry has soared far above the other, more heavily focused upon industries that reside within the Tech sector. Over the past five days, the Dow Jones Renewable Energy Equipment Index (Bet you didn't know there was one) has soared 22.2% higher, while similar indices for Computer Hardware (basically Apple (AAPL) ), and Software are up 2.2% and 2.1%, respectively. The Dow Jones US Semiconductor Index is down 2.3% over that time frame.

What gives is not hard to figure out. Going back to early last week, the scuttlebutt leaking out of fiscal stimulus negotiations had our legislators not just piecing together a federal spending plan tied to a Covid-19 relief package , but also extensions of certain tax credits that benefit the development of green, or renewable energy. Within a few days investors learned that the legislation that overwhelmingly passed in both the House and the Senate included extensions for both the Alternative Fuels Tax Credit as well as the Alternative Fuel Vehicle Property Credit. These tax credits generally have been meant to aid in driving the development of wind and solar energy here in the U.S., but with the growth in demand for and now supply of electric vehicles, fuel cell companies also benefit from these credits that were planned to be phased out.

Bottom line, as part of the aid deal, yes the one that the president has threatened to veto unless more funding is set aside for American households, these firms will see the 26% investment tax credit extended for another two years. Without a deal that credit drops to 22% next year and 10% the year after.

What to Make of This

Given the popularity of electric vehicles manufactured by Tesla (TSLA) and the likely onset of increased competition from both tech companies such as Apple (AAPL) and traditional automakers such as Ford Motor (F) and General Motors (GM) , I think fuel cells as a portable source of renewable energy will now come into focus. Perhaps even more so, as executive leadership in Washington transfers from an administration deeply supportive of traditional fossil fuel production to one with a more "green" agenda.

Don't get me wrong, this stuff is not new. Fuel cell technology has been around for years, and has never really been a profitable business. Then again, demand for electric vehicles and the means to power them had never really been part of the economy until recently.

I have had my radar on two such names, Plug Power (PLUG) and FuelCell Energy (FCEL) . Remember that piece that I wrote on Plug Power last week? I wrote that on Tuesday, December 15th. I gave readers two trade ideas that morning, and I did put one of them into action. I bought the shares on the 15th after the piece had been published. The shares were moving around by then, so I wrote calls against the position thinking the calls overvalued. Long story short, the calls were indeed not overvalued. Sure, I punched a ticket. I got paid. Fact is that I could have, I should have done better. (Rule number one: There is no such thing as a lousy profit. Rule number two: No woulda, coulda, shouldas.)

Now, my interest is high in FuelCell Energy. The shares have run almost 70% since early last week. Too far too soon? Let's explore.

First, the company does not make money, even with the help of government subsidies. FuelCell is slated to report its fourth quarter performance on January 8th. The street is looking for EPS of $-0.06 on revenue of $17.05 million. This would be an improvement over Q4 2019 EPS of $-8.62 on Q4 2019 revenue of $11.0 million. Substantial progress. The firm is expected to lose 41 cents a share for the full year and lose 17 cents a share next year, and of course a weakened subsidy is factored into that number.

The environment for these firms is not only friendlier at the federal level, but far friendlier at the corporate and investment levels as ESG has become a major theme among large investors such as Blackrock (BLK) . That matters a whole lot, especially in valuation. 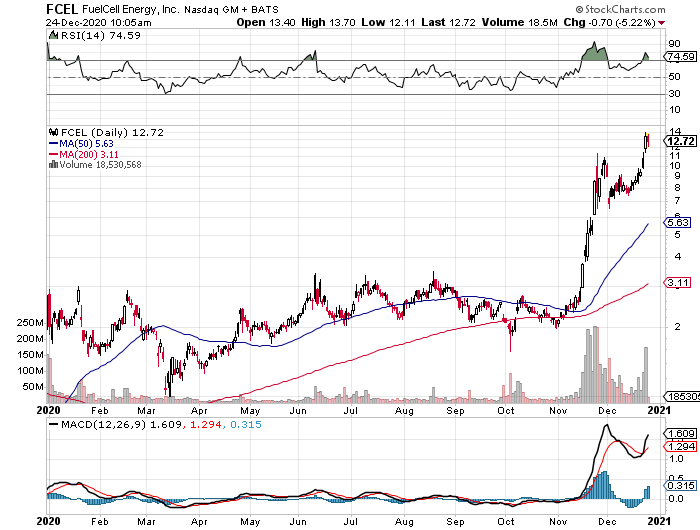 Two nearly parabolic moves for a company still waiting on profitability. Overbought? Now, it is. The stock is trading lower this morning, down about 5%, still trading at about 225% of it's one 50 day SMA. No, I can't just throw money at this equity and hope for the best. I do have an idea though.

Note: I understand that the strike price on the call is already in the money.

Potential Outcomes: The shares keep rising, and the shares are called away at $12 on January 15th. The trader then pockets a 14.8% profit. The shares collapse? The trader is holding the bag at $10.45 instead of $12.60.

(Apple and Ford are holdings in Jim Cramer's Action Alerts PLUS member club. Want to be alerted before Jim Cramer buys or sells these stocks? Learn more now.)

Get an email alert each time I write an article for Real Money. Click the "+Follow" next to my byline to this article.
TAGS: Investing | Markets | Stocks | Technical Analysis | Trading | Utilities | Electric Vehicles