During Friday's Mad Money program, Jim Cramer outlined his game plan for viewers this week. Tuesday is technology day, when Apple (AAPL) , Alphabet (GOOGL) , Microsoft (MSFT) , and Advanced Micro Devices (AMD)  will all be reporting. Cramer expects strong results from them all, but noted that the expectations for Microsoft may cause the stock to dip after it reports.

Let's check the charts of MSFT this morning. In our last review of MSFT on July 14, we wrote that "Traders and investors who are long MSFT should think about raising stops or doing some profit-taking. Yes, MSFT is in an uptrend and we should let our profits run. But, we should also not become complacent."
In this updated daily bar chart of MSFT, below, we can see that prices have continued to climb higher since our July 14 review. MSFT is above the rising 50-day moving average line and some $50 above the slower-to-react but still rising 200-day moving average line.
The On-Balance-Volume (OBV) line has been improving but still has not broken out over its February and April peaks. The Moving Average Convergence Divergence (MACD) oscillator has briefly crossed to the downside before turning higher again.

In this weekly Japanese candlestick chart of MSFT, below, we see a bullish picture. Prices are in a longer-term uptrend above the rising 40-week moving average line. The candles are white or open (bullish) and we are not seeing upper shadows to suggest that traders are rejecting the highs.
The weekly OBV line looks stronger and more bullish than the daily line. This OBV line has made a new high to confirm the new price highs.
The MACD oscillator is bullish and pointed higher.

In this daily Point and Figure chart of MSFT, below, we used a five box reversal filter. Here the chart shows that prices have reached a price target in the $283 area. 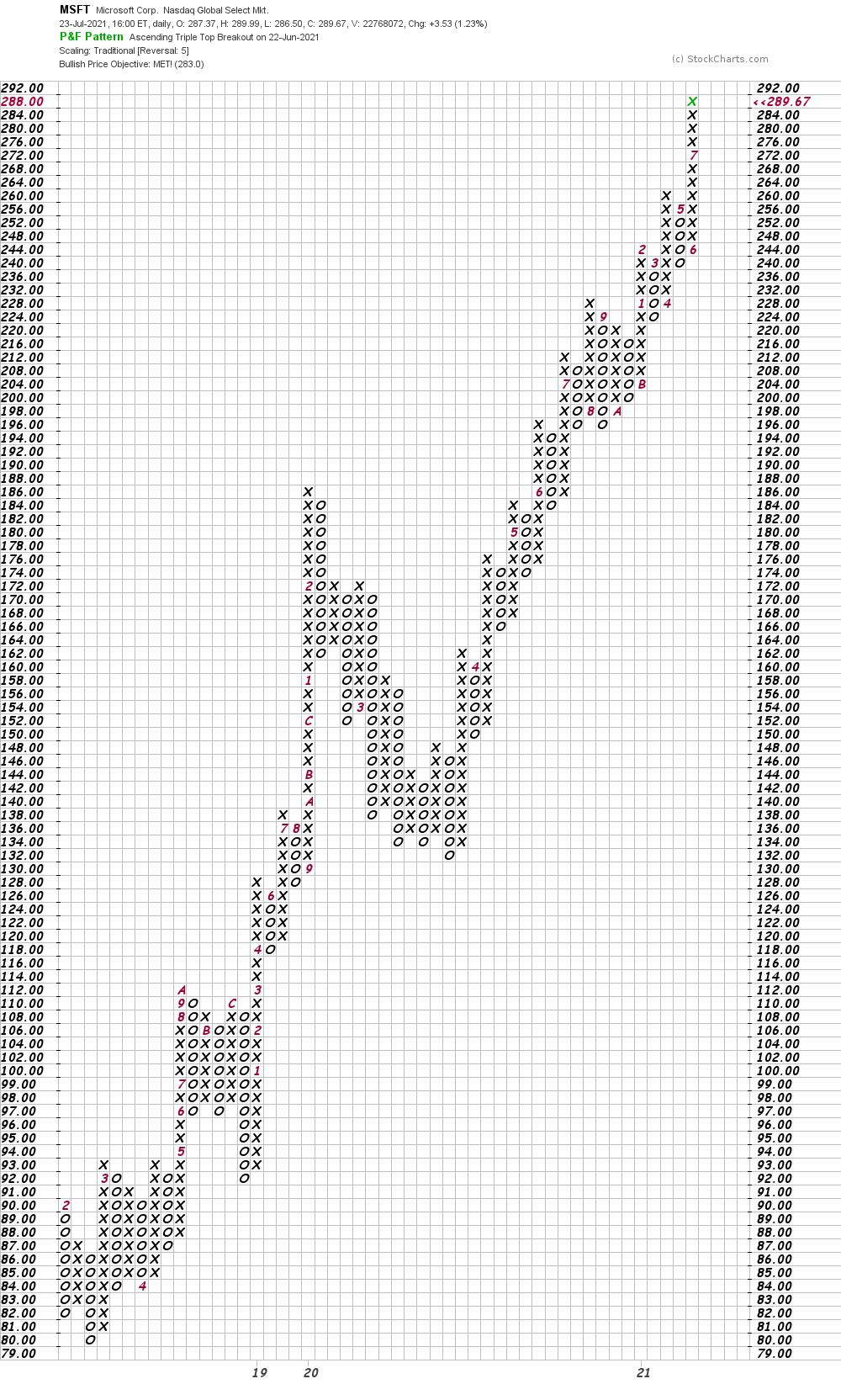 In this weekly Point and Figure chart of MSFT, below, we used a five box reversal filter again and here we can see a $353 price target.

Bottom line strategy: MSFT is on a strong run to the upside but it has reached a Point and Figure price target. Traders who are long should consider raising sell stops to $265.

(AAPL, GOOGL, MSFT, and AMD are holdings in Jim Cramer's Action Alerts PLUS member club. Want to be alerted before Jim Cramer buys or sells these stocks.? Learn more now.)

Get an email alert each time I write an article for Real Money. Click the "+Follow" next to my byline to this article.
TAGS: Investing | Stocks | Technical Analysis | Trading | Software & Services | Technology | Technology Hardware & Equipment | Mad Money | Earnings Preview