Having lived through the 1970's commodity/inflation cycle as a commodity analyst, I do not believe that this current bout of inflation is "temporary." I believe inflation will heat up further in the months and years ahead driven more by demand pressures, supply lags, poor weather and growing conditions, and wage increases. Therefore, my top commodity pick for 2022 and beyond is the Invesco DB Commodity Index Tracking Fund (DBC) .

Demand for commodities typically changes slowly with increases in the GDP and personal disposable income.

Commodity booms like the one in the 1970's and into the early 1980's were driven by supply shocks. You woke up to read the newspaper and learn that there was a freeze in Brazil that cut coffee production in half, and a freeze in Florida and Georgia that sent orange juice prices soaring. Or, an ocean temperature change hurt anchovy production, a poor wheat crop in Russia, a poor sugar harvest, and cattle deaths from a bad winter.

This Time It's Different

In the past decade we've witnessed a huge rise in the middle class around the world. The former poor now want stuff. They want better diets and they move from rice to chicken to beef - all of which take more resources. They want to move from a bike to a moped to a small two seater to a big SUV. There are now hundreds of millions of people around the world - a dynamic that we have not experienced before.
Add to this examples of supply that is not changing in the short to intermediate time frame. The timeline to bring a new new mines or oil field into production stretches into years because it is harder to reach, or slowed by regulations, and CEO's are reluctant to invest billions if prices could retreat like in the past.

Price Will Be Used to Ration Supplies in the Years Ahead

Labor is now in a strong position - jobs that paid a little better than minimum wage now command $15 to $22 an hour. There are more reports of unions gaining ground and more strikes. In the 1970's labor was strong enough to demand COLA clauses in their contracts with management, and that added to the upward spiral of inflation.
Now, let's check out the charts of the DBC.
In this daily bar chart of DBC, below, we can see that prices have trended higher the past 12 months. DBC is trading around the 50-day moving average line and above the rising 200-day line. The dip towards the 200-day line in early December looks like a buying opportunity in hindsight.
The On-Balance-Volume (OBV) line has gained the past year and the Moving Average Convergence Divergence (MACD) oscillator is ready to cross over the zero line for an outright buy signal.

In this weekly Japanese candlestick chart of DBC, below, we can see a long and strong rise from early 2020. Prices are trading above the rising 40-week moving average line. The rise in the weekly OBV line the past two years matches and confirms the price gains. The MACD oscillator has been above the zero line since late 2020 and is narrowing towards a new buy signal. Prices turned higher long before supply-chain issues became front page news.

In this long-term weekly line chart of DBC, below, we can see that prices have broken a downtrend from 2008. DBC has made a strong advance over the highs of 2018. The slope of the 40-week moving average line is bullish. Trading volume has expanded significantly with the rally and tells us that investors have been attracted to the rally. The weekly OBV line is strong and has broken a multi-year decline.

In this daily Point and Figure chart of DBC, below, we can see that the software is projecting a $37 price target. 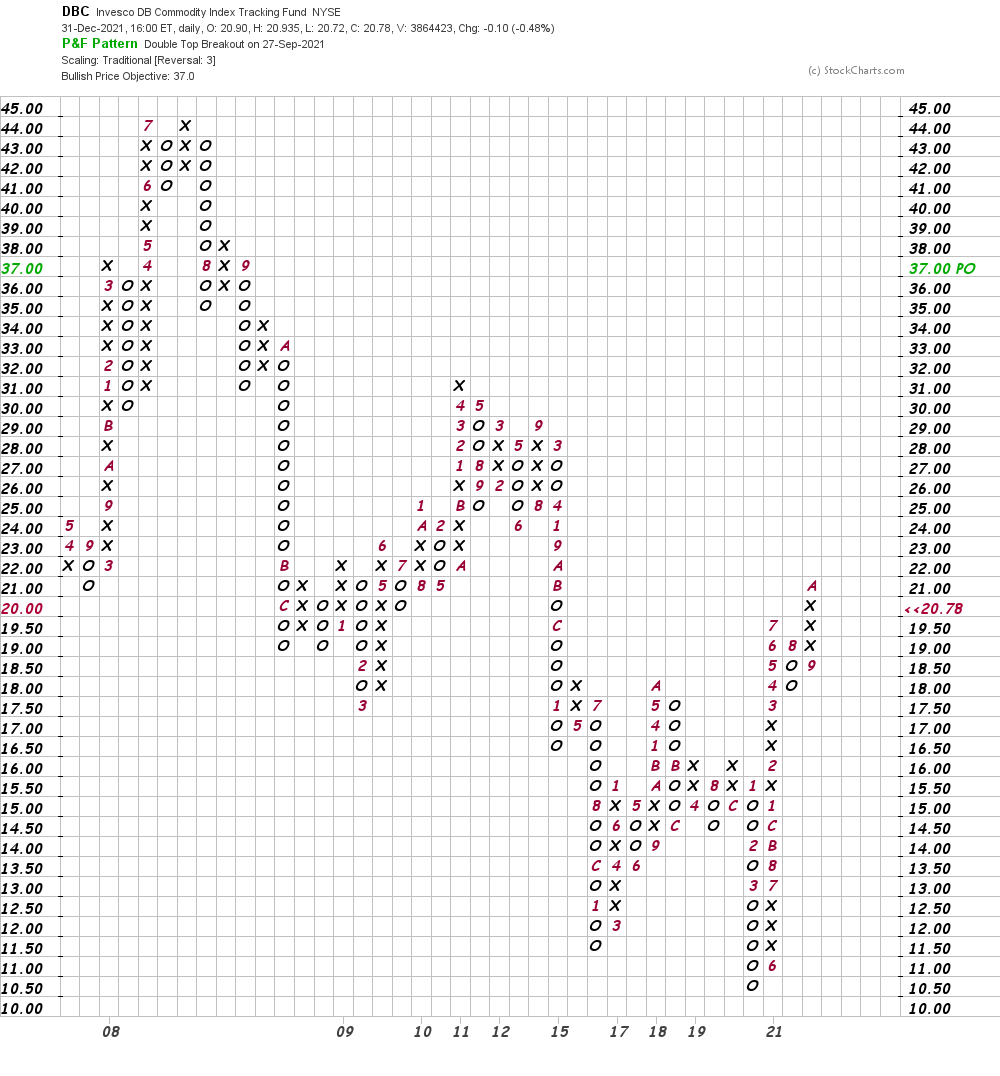 In this weekly Point and Figure chart of DBC, below, we used a five box reversal filter and here the software is projecting a potential longer-term price target in the $63 area.

Bottom line strategy: When you go to the grocery store and contemplate whether you are going to purchase chicken thighs instead of chicken breasts, or fish from Chile instead of Norway, you can also think about going long DBC. Risk below $19. Add on strength. $37 is our first price target.

Get an email alert each time I write an article for Real Money. Click the "+Follow" next to my byline to this article.
TAGS: Commodities | Funds | Investing | Markets | Stocks | Technical Analysis | Trading