One subscriber bothered to ask. To me, that means at least five readers, maybe 10 probably wanted to. Who or What is MongoDB (MDB) ? MongoDB provides a general purpose database platform that enables developers to build and update applications across a range of use cases in the cloud, on-premise, or in a hybrid environment. The firm's top selling product is currently MongoDB Atlas, which is a cloud hosted database as a service offering that includes infrastructure and management of its community server.

Beyond the firm's platform offerings, MongoDB also provides both training and consulting services to its clients. MongoDB competes directly against the likes of Amazon (AMZN) , Microsoft (MSFT) , International Business Machines (IBM) , and Oracle (ORCL) , so it's swimming with some pretty big fish. By the way, earlier this past quarter, MongoDB appointed Peder Ulander as Chief Marketing Officer. Ulander had previously been a marketing executive at Amazon in the cloud division.

On Monday evening, MongoDB reported the firm's third quarter financial performance. The stock had come in roughly 27% over three weeks going into the numbers, while 11 of the 16 sell-side analysts that cover this name had revised lower their earnings expectations. They were wrong. The firm posted adjusted EPS of a loss of $0.11 per share, or GAAP EPS of a loss of $1.22 per share, on revenue generation of $226.89M. Performance beat Wall Street across each and every one of these metrics, while sales amounted to 50% year over year growth, supported by 84% year over year growth for MongoDB, the firm's top selling product.

For the period, gross profit totaled $158.4M, good for a gross margin of 70%, which was up from 69% for the one year ago comparable period. Adjusted gross margin came to 72%. Of course, it can not be all good, can it? When a firm outperforms expectations and still loses a lot of money? During the three month period, MongoDB used $5.8M of cash from operations, used $2.2M of cash in capital expenditures, and used $1.2M of cash in principal payments of finance leases. This led to free cash flow of $-9.2M, which in fact does compare well to the $-14.9M in free cash flow posted one year ago.

The firm stood at quarter's end with a net cash position (cash, equivalents, and short-term investments) of $1.802B. up 88.2% over nine months. Current assets are up similarly as are total assets. Current and total liabilities (less equity) are up over that same period but not even close to the pace of growth on the asset side. Aside from some growth in convertible senior notes that for now appears quite manageable, the balance sheet is in good shape.

On Tuesday (this) morning, I have found at least nine sell-side analysts who have opined on the stock. Six "buys" or buy equivalents, and three "holds" or hold equivalents. Two of the three holds have declined to offer a target price, which makes averaging a little tough. The average of the other seven is $570, which is artificially high because we know we are missing two probably less bullish target prices.

The high target price of the group is $660 (Tyler Radke of Citigroup, 5 stars at TipRanks), and the low was $490 (Matthew Broome of Mizuho Securities, 3 stars).

I feel a little cautious on MDB. I really do like how this firm is beating Wall Street after Wall Street was cutting numbers and then raised guidance in their faces. That's really cool. That said, just look at the competition. Of the four firms mentioned above, IBM is easily the smallest company among them at a market cap of $106B. MongoDB is valued at $30B, and that's with the shares trading at 39 times sales.

Even with the accelerating year over year revenue growth... from 39% to 44% to 50% the past three quarters, it is difficult to pay these prices for this company. I mean... just thinking out loud... I run a big company, and I need to up my cloud game... I will probably turn to either Microsoft or Amazon. 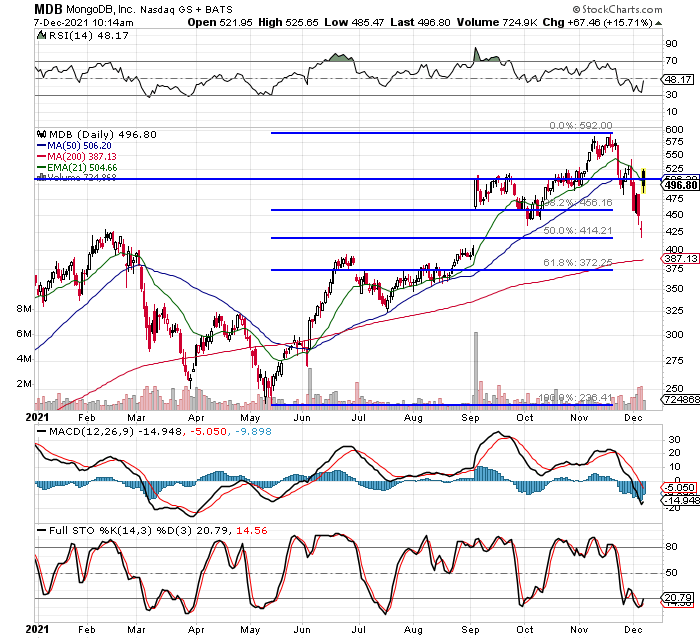 The shares traded wildly Tuesday morning. Readers will see that the shares did bottom out at a 50% retracement of the May through November rally on Monday night. I had to draw the 23.6% Fibonacci line on the chart myself ($507). I think holding that level today, which right now, MDB is not, might be key.

Even with this day's significant pop, all three of my most focused upon indicators (RSI, Full Stochastics, MACD) shade negative. Let me zoom in for a second... 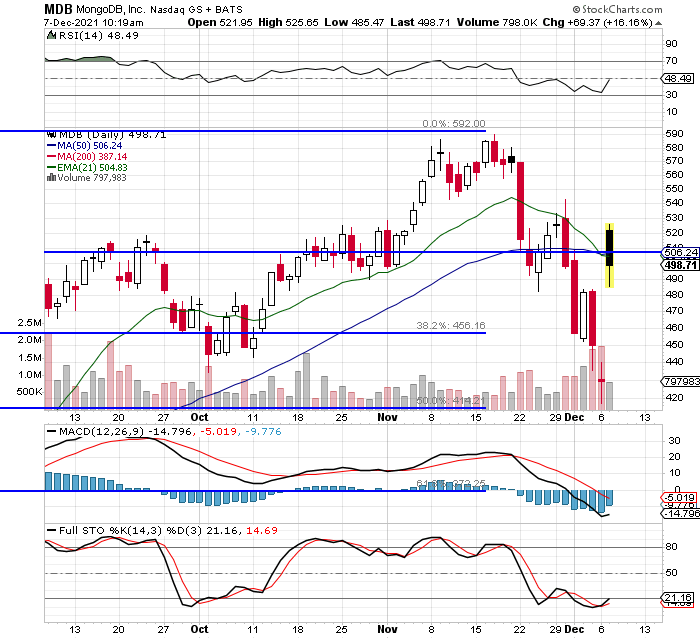 I want readers to also note the increased trading volume on the down days and the way that those down day candles engulf the up day candles that they follow. That is a very negative signal. Roughly 8% of the float in MDB is held in short positions. Not enough to get the meme crowd all fired up, but enough to add a little gusto to the morning's rally.

Going forward, I would be more comfortable, either setting up a bearish options play such as bear put spread, or just staying away than getting behind this rally at these prices on the long side. On the bright side, if one does buy the shares, $500 calls expiring this Friday can still be sold for $15.

(Amazon and Microsoft are holdings in the Action Alerts PLUS member club. Want to be alerted before AAP buys or sells these stocks? Learn more now.)