Shares of Moderna (MRNA) slumped after a fall in sales of Covid vaccines, leading to a big Q3 earnings miss. Let's roll up our sleeves and take a shot at the charts and indicators.

In this daily bar chart of MRNA, below, we can see that prices spiked up into late November and then quickly tumbled lower into early March. MRNA bounced but the rally failed and prices sank to new lows in May and June. There was a stronger bounce into August that too failed. MRNA has retested the lows again in September and October.
Prices are struggling Thursday and have dipped back below the declining 200-day moving average line. We don't know where prices will close today so we cannot definitely say that prices are going to retest the $120 area again. Trading volume has not increased on the bounces.
The daily On-Balance-Volume (OBV) line has drifted lower since early July and tells us that sellers are being more aggressive than buyers. The trend-following Moving Average Convergence Divergence (MACD) oscillator is slightly above the zero line but that condition may not last long.

In this weekly Japanese candlestick chart of MRNA, below, we see a neutral to bearish picture. Prices are in a longer-term downward trend and trade below the 40-week moving average line after a rally failure at the line. We can see some lower shadows around the $120 level telling us that traders are rejecting the level.
The weekly OBV line shows a drift lower from August 2021. The MACD oscillator is below the zero line as it has been for the past year.

In this daily Point and Figure chart of MRNA, below, we can see a potential downside price target in the $111 area. 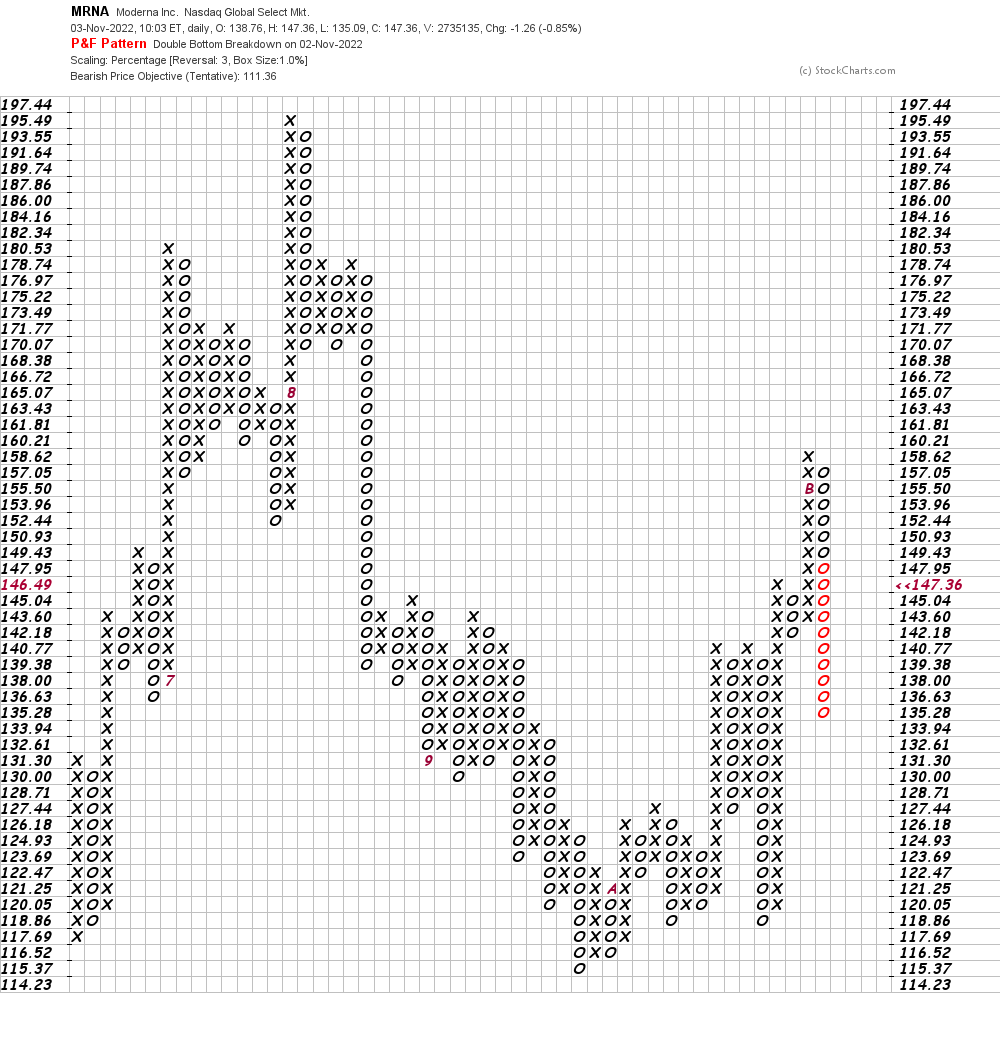 In this weekly Point and Figure chart of MRNA, below, we can see an upside price target in the $192 area.

Bottom line strategy: Sometimes a stock will ignore bearish news as it reflects the past three months and not the prospects of a company three or six months into the future. This could be one of those times for shares of MRNA. Let's see how things develop.
Get an email alert each time I write an article for Real Money. Click the "+Follow" next to my byline to this article.
TAGS: Earnings | Investing | Stocks | Technical Analysis | Trading | Biotechnology | Healthcare | Pharmaceuticals