If it seems like I spend a lot of time covering the stocks of companies focusing on the war against Covid-19, I am. Like you, I know that not only the welfare of my portfolio, but any hope we all have in returning to an elevated quality of life truly depends on being able to either effectively treat, or completely avoid this disease all together. Not to avoid the disease through avoiding social contact, but to not worry about the guy walking the other way on the sidewalk, or the kid behind the counter at the convenience store. You want to go to a ballgame? A concert? The theater? Or just eat out? Don't we all.

Moderna (MRNA) is the firm behind one of the higher profile attempts to produce one of these "effective" vaccines, creating their mRNA-1273 candidate. This candidate is in the cutting edge of a new technology that has never been approved for actual use before... messenger RNA technology, which elicits an immune response through basically changing the instructions for the individual's body when exposed to potential infection. Moderna does their first human being with this product back on March 16th. Are we out of the woods? Of course not, but the very earliest results across a very small sample of participants are better than bad, in fact, these early results are as good as we could hope. A breath of fresh air.

In the Phase 1 (Phase 1 is really about safety, then we move on to efficacy.) clinical trial for mRNA-1273, Moderna does 45 volunteers aged 18 to 55, across three separate dosages. The plan was to dose one group at 25 micrograms twice, one group at 100 micrograms twice, and one group at 250 micrograms once. First off, the safety results were encouraging. The vaccine candidate appears to be well-tolerated. Three volunteers at the highest dosage developed Grade 3 systemic reactions. There were no life threatening reactions. There were no serious reactions at lower dosages.

What's interesting is that some data was released for the first eight individuals dosed. Four at the 25 microgram rate and four at 100. The interim Phase 1 data demonstrates that for the four dosed at the 25 microgram level, the vaccine elicits an immune response of the magnitude caused by having recovered from the natural infection, according to the firm's chief medical officer, Tal Zaks. Individuals that received the higher, but not maximum dosage showed binding antibody levels significantly exceeding the levels of those that have already survived the disease.

Now what? Even before all of the Phase 1 data is in, the FDA has already approved the start of Phase 2 trials for Moderna's mRNA-1273, and the firm plans to move forward with Phase 3 testing as soon as July. Compressed? Yes, the timeline is compressed. Yes, there is a sensed of urgency. Not just in beginning next phases ahead of early phase completion, but also in creating enough scale to manufacture hundreds of millions of doses. That's the president's "Operation Warp Speed" operation and it includes all of the various firms leading the way in developing a vaccine rapidly.

Beyond Moderna, big pharma is deep on this, including the likes of Pfizer (PFE) , Johnson & Johnson (JNJ) , and Sanofi (SNY) . Even the U.S. Army is involved in terms of providing necessary logistical support. The idea is to get the first safe and effective vaccine out to the masses. Broadly. By year's end. Even earlier for those on the medical front lines and first responders, if the administration has their way.

As for Moderna, the firm wold like to add a dosage of 50 micrograms to the Phase 2 trial, and amend the Phase 1 results to include these results. 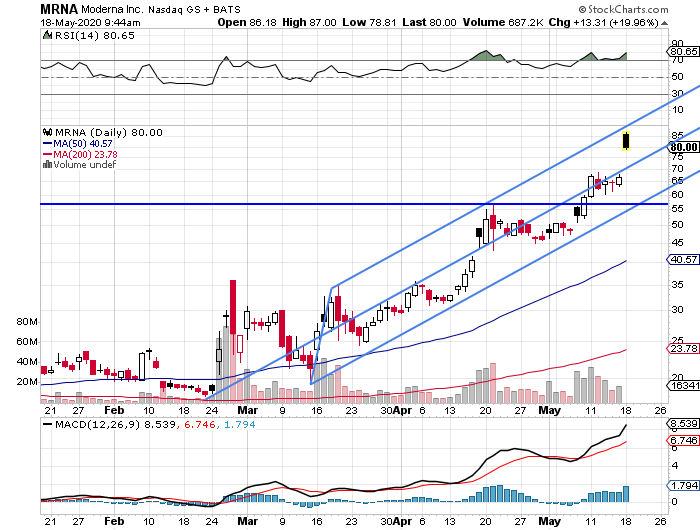 Obviously there is some muscle behind this Monday pop, but as readers will note, the shares ran into resistance in the early going as the upper trend line of our Pitchfork model (which I have shown you before). I am long this name, as I am several of the others involved. Will I add on a day like this? Truth is that I am more than likely to sell a little on such a day.

My current price target is $44, and that is up from where it was. Truth is that I am rooting for the human race, so I probably will not sell, but under any other conditions, with a stock trading close to twice my target, I would reduce, and reset. I will probably sell calls against the position. You can still get the May 22nd $90's for more than $3. That sounds like a deal.