The Hi-Lo Indicator for Nasdaq is at 22%. Under 20%, and it starts to get oversold. Take a look at the chart and you will notice that since May, this indicator has made lower lows while Nasdaq has not. That is the underlying weakness. You have seen it in the 10-day moving average of the Nasdaq new lows that I've been showing for three weeks now.

Then there is the Volume Indicator which I referenced the other day. It remains at 50%. It does not get oversold until at least the low to mid 40s. So, that, too, is not close to an oversold reading. I wish I could push it along, but I cannot. It gets there when there has been enough selling. That's it.

The McClellan Summation Index turned down a few weeks ago and has not had an uptick since. It did not uptick in last week's rally or the rally attempt the week before. It does need a net differential of positive 2,600 advancers minus decliners to halt the decline, so with that number being back to positive 2,000, we can say it is somewhat oversold again, on a short-term basis.

Now let's talk about the 30-day moving average of the advance/decline line. This is the indicator I often use to determine the "when" we might see an oversold condition on an intermediate-term basis. I do the same exercise as I do for the 10- day moving average on the Overbought/Oversold Oscillator, where we look back x-days ago to see what numbers we are dropping. When we are staring at a long string of red numbers for the moving average to drop, we see the market as oversold.

If you take a look at the numbers we are dropping off that 30-day moving average of the advance/decline line, you can see in the next three-plus weeks there are exactly four red numbers to be dropped. That is it. I can't change that.

Sure, it's just the math. And since I don't believe any of my indicators are the holy grail, it's possible this never gets oversold, before all the other indicators get oversold. But when I see this string of numbers, I surely can't pinpoint the time frame. 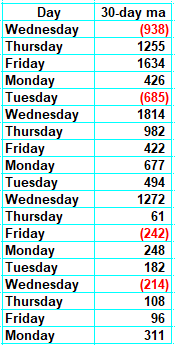 On the sentiment front, the CBOE changed their website this week and quite frankly it's hard to trust the readings from Monday, because they were so "off" all during the day. But if they are to be trusted, the equity put/call ratio was 94% and the put/call ratio for the Volatility Index was 16% -- both would be considered bullish for stocks. As of this writing, Tuesday's readings are not updated. Those Monday readings would be a change in sentiment toward "too many bears."

But the Investor's Intelligence bulls did finally tumble -- to 47% from 55%. This is what I thought might happen a week ago. All those bulls moved to the correction camp, not the bear camp. 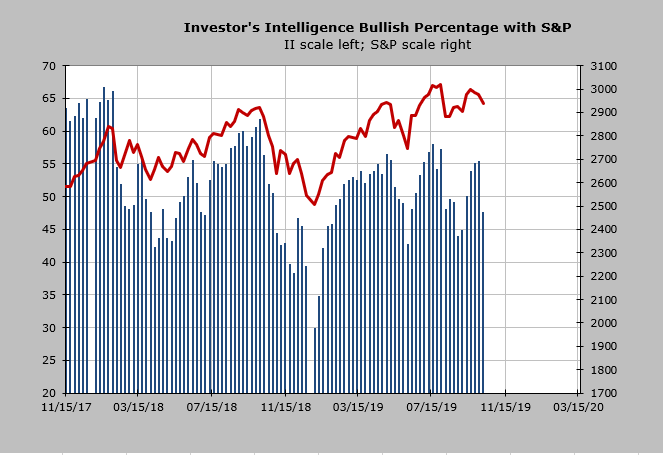 So that's essentially where the intermediate term indicators stand. Some are close to oversold and others are not.

Meisler's column will not appear on Thursday.