On Friday, five star analyst Mark Moerdler of Bernstein noted that Microsoft (MSFT) , in particular, is well positioned to help deliver a metaverse platform sooner than some other competitors might be, given the firm's complete package. Moerdler mentions the Azure platform, the HoloLens and Mixed Reality devices, Microsoft Graph, Microsoft Mesh, LinkedIn, as well as the firm's expertise in gaming as potential metaverse strengths.

Moerdler wrote, "Microsoft is delivering on what many expect will be needed for the Metaverse. While this potential next driver of growth is not part of our thesis today it could be a meaningful driver for numerous parts of the business." Little did Mark Moerdler, who rates MSFT at "overweight" with a $364 price target, was about to try to strengthen that expertise in gaming.

Microsoft has apparently agreed to acquire embattled video gaming company Activision Blizzard (ATVI) in an all-cash deal estimated as worth a rough $68.7B or $95 per share. Remember what I have always said about Microsoft CEO Satya Nadella. The guy is one of those few who simply speaks on another level, and even though you are confident that you are not stupid, you start to wonder if in fact you are. Nadella sees things before others do, and he adapts his firm to what will be instead of what is or what has been.

Activision had been down almost 30% since July when regulators from the state of California filed suit against the firm alleging sexual harassment and gender pay disparity. Activision has been busy cleansing the shop of offending employees and openly promised to do better. All of that lost ground and more was made up in this (Tuesday's) pre-opening session as ATVI traded more than 35% higher than Friday's closing price.

Activision Blizzard is the name behind such popular gaming franchises as Call of Duty, Warcraft, and Candy Crush. This library would expand significantly the operation behind Microsoft's XBox series of game consoles as well as Microsoft's own gaming library that includes Doom and Minecraft. Once completed, the combined firm would rank only behind Tencent Holdings (TCTZF) and Sony Group (SNEJF) in terms of gaming driven revenue. Word is that the deal contains an estimated $3B breakup fee.

Microsoft to Report Next Week

Microsoft is expected to report the firm's fiscal second quarter financial results after the closing bell next Tuesday. I know of 29 analysts that cover MSFT. Wall Street's consensus for EPS next week seems to be for $2.32 with a range of $2.27 to $2.46, on revenue of about $50.8B, with a range of $50.5B to $51.8B. At consensus, the quarter would be good for annual earnings growth of 14.3% on revenue growth of 17.9%.

Readers know that I am long Microsoft and the name has been a Sarge fave seemingly forever. I have also dabbled in Activision Blizzard, in particular when I noticed that many of their games were exceedingly popular with young soldiers I worked with. That said, it's been a while since I was in that name, and I fortunately missed their alleged troubles.

Sure, Microsoft reported some supply chain issues back in late October as did nearly everyone else, but Microsoft is consistently good at everything it does. As of the most recent earnings release, Office 365, LinkedIn, Dynamics 365, Server Products and Cloud, Azure and other Cloud windows all posted double digit year over year growth. Only Xbox content and services (partially due to supply issues) grew sales by less at just 2%, and Nadella addresses it immediately... not to mention the Metaverse implications.

The hares are done a tad in the wake of this news. I am not discouraged as a Microsoft investor in the least. If anything, this confirms for me why I cast my lot with Nadella in the first place. 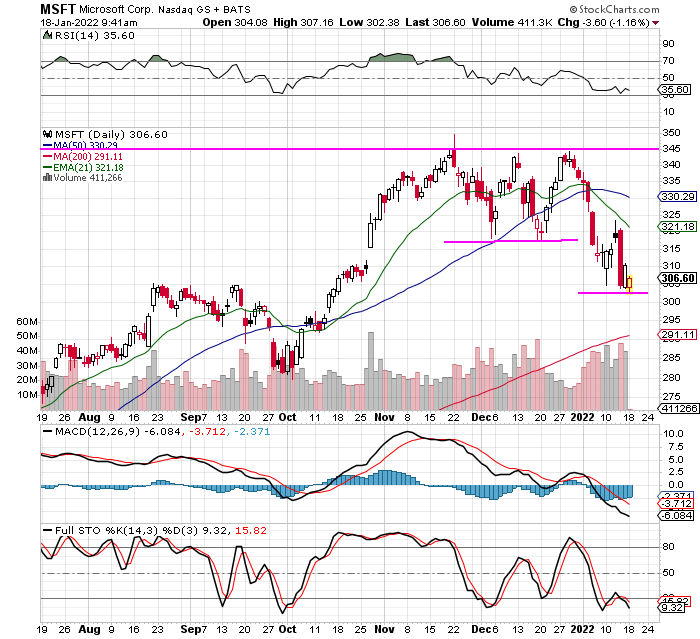 Safe to say at this point that the period enclosing November into early January was a "triple top" or a "basing period" and not a "double bottom." Readers will see that Relative Strength is now teetering on the edge of being technically oversold, while the daily MACD and Full Stochastics Oscillator are both already screaming "uncle." At least the late October gap is unfilled no more. While I do see it possible that the shares could drop as low as the 200 day SMA ($291) on broad tech weakness, MSFT continues to differentiate itself.

Going into earnings, I see this name as an add on this weakness. We do not have a clean pivot, so the rise tried resistance level around $345 will have to do for now. Better to use the spot as a target instead of a pivot until the shares are close. I can see myself getting long the MSFT January 28th $320 calls for a rough $3.10, and paying for them with the sale of MSFT January $290 puts for about $3.20. In other words, the trader gets paid a dime to be willing to take on equity risk at $290 in less than two weeks in exchange for a second swing at $320 should the shares take off after the earnings call next week.

Get an email alert each time I write an article for Real Money. Click the "+Follow" next to my byline to this article.
TAGS: Mergers and Acquisitions | Earnings | Investing | Markets | Stocks | Technical Analysis | Trading | Software & Services | Gaming