"This has been a great stock. I want you to own Microsoft," said Cramer. Let's check the charts of that famous company up in Redmond.

In this daily bar chart of MSFT, below, we can see that prices are above the rising 50-day moving average line, as well as the bullish 200-day line. The On-Balance-Volume (OBV) line shows a rising pattern from December, and that signals that buyers of MSFT have been more aggressive than the sellers. The trend-following Moving Average Convergence Divergence (MACD) oscillator was hugging the zero-line for August and September and into October, but it has turned upwards to an outright go-long signal.

In this weekly bar chart of MSFT, below, we can see a bullish alignment of price and indicators. MSFT is above the rising 40-week moving average line. The weekly OBV line just made a new high for the long move up to confirm the uptrend. The MACD oscillator has been in a take-profits sell mode, but the two moving averages of this indicator have been narrowing and are close to a bullish crossover.

In this Point and Figure chart of MSFT, below, we can see a recent upside breakout and a price target of $162 projected. 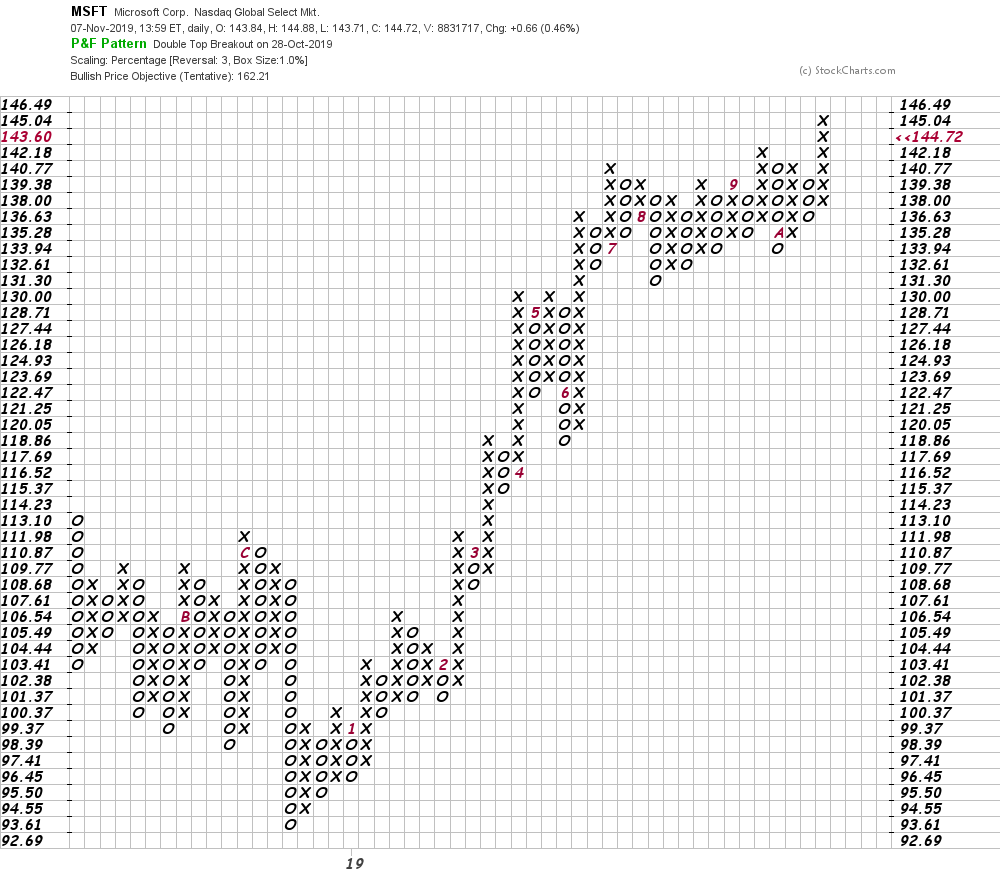 Bottom line strategy: I have been positive on MSFT for some time now and today is no different. Hold existing longs and buy more MSFT if you are underweight in tech. Risk to $136 now while looking for gains to the $162 area.

(Microsoft is a holding in Jim Cramer's Action Alerts PLUS member club. Want to be alerted before Jim Cramer buys or sells the stock? Learn more now.)

Get an email alert each time I write an article for Real Money. Click the "+Follow" next to my byline to this article.
TAGS: Investing | Technical Analysis | Software & Services | Technology | Mad Money

I do believe that having no economy is temporary. I also believe that what comes out on the other side will be smaller, far less global.

The drug and vaccine maker shows significant upside potential on a key chart.

Market Players Want to Believe the Worst Is Over

Don't rush to buy for fear that you are going to miss the best entry points. Countertrend bounces should not be easily trusted.

The Stock Market Should Take Its Cue From the Oil Market

The excess inventory in oil will dry up, and the market will be forever changed. It is harsh in the short term, but could ultimately be beneficial.

We finally saw the Citi Panic/Euphoria Model push into Panic territory -- and here's why I believe a retest awaits.