"We are seeing customers exercise caution in this environment, and we saw results weaken through December. We saw moderated consumption growth in Azure and lower than expected growth in new business across standalone Office 365, EMS and Windows commercial products that are sold outside the Microsoft 365 suite."

The economy is slowing. Period. Microsoft (MSFT) reported the firm's fiscal second quarter results on Tuesday evening. The event was the highlight of the season so far. The event will be one of the highlights of the season, even at season's end. The shares burst higher after the closing bell last night as the numbers started to cross the tape.

Adjusted EPS of $2.32 (GAAP EPS: $2.20) beat by a penny. The adjustment of $0.12 came largely due to a hardware related impairment as well as layoff related severance payments. Revenue of $52.747B missed small, but was good enough for annual growth of 1.9%. Growth is growth they say. Or do they?

Upon closer inspection, revenue growth of 1.9% (+7% in constant currency) was the slowest pace of growth for this firm in more than six years. This resulted in operating income of $20.399B, which was down 8% (0% in cc), and net income of $16.425B. That net income print was down 12% (-4% in cc) and reflected the first year over year contraction in earnings for the firm in five years.

Still the market could handle what it saw. Across the segments, sales landed close to where they were supposed to. Productivity and Business Processes generated $17.002B (+6.7%), and beat expectations, as Intelligent Cloud produced sales of $21.508B (+17.8%). This met expectations, as Azure grew 31% or 38% in constant currency. Wall Street was looking for 37% Azure growth in constant currency, so this was a beat and a beat in the right place if you will.

Unfortunately, we still have to look at Personal Computing and then guidance. Neither would go so well. Personal Computing posted revenue of $14.237B (-18.8%), falling short of management's own conservative guidance. Everything PC related and gaming related took one on the chin.

It was then that the worm turned. It was then that the post-closing bell rally turned into overnight weakness. For the current quarter, as CFO Amy Hood cited the tough environment, the firm guided revenues for both the Intelligent Cloud and More Personal Computing segments below Wall Street consensus. All told, the segmented guidance, which is how Microsoft has always provided the firm's outlook, adds up to a shortfall of almost $1.5B relative to where Wall Street was for this number. Worse than that, the firm sees growth for its Azure offering, which is the firm's "golden child" decelerating between four to five percentage points (in cc) from the quarter reported. The firm also sees slowing growth for Office 365.

Regular readers know that I came in long the equity, and that a little more than two weeks ago, I went short a January 27th $215/$205 bear put spread. I bought back the $215 puts last night just ahead of the close as I had already come close to maximizing that profit. Saw no reason to risk giving back any of that. I left the $205 puts that I had bought for downside protection open as they are just about worthless and will likely expire that way. The spread was a net win that reduced my equity position's net basis by $1.34. 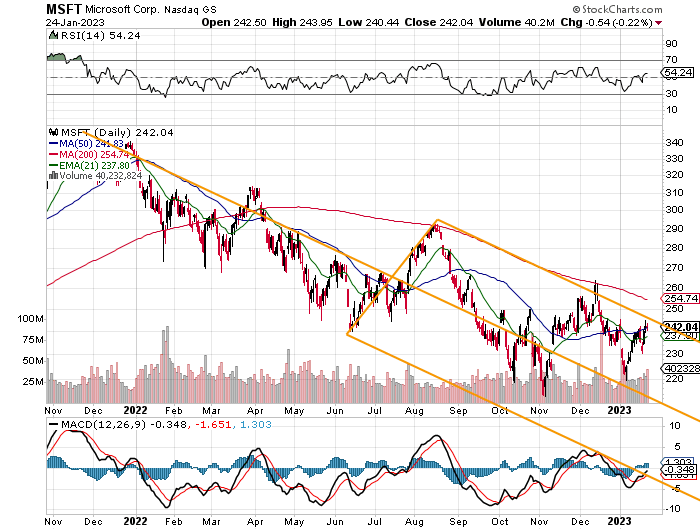 As I showed you in early January, the shares remain in a downtrend. I am long the name longer-term and will remain long something going forward. That said, about 29% of my entire position was purchased as a trade this month with an average price of $225.33 ($223.99 including including the net credit from the options trade). MSFT will likely open below it's 50 day SMA ($242). That will force at least some portfolio managers to reduce exposure. Should the shares also forfeit their 21 day EMA ($237), that will flush out the swing trading crowd, and my short-term position with them. I am not going to risk letting that trade go negative.

It was the day that traders became quiet. After what had been a nice run. After the S&P 500 had come to crossroads of conflicting technical signals. Traders watched more than acted. On Tuesday, the Dow Utilities were your best performing index at +0.63%, while the Dow Transports were the worst at -0.82%. The S&P 500 barely moved at all, while the Nasdaq Composite gave up 0.27%. Among the 11 sector SPDR ETFs, there were six winners, led by the Industrials (XLI) , and five losers led by Health Care (XLV) . XLI was up 0.66% for the session, while XLV was down 0.66%.

Looking at breadth, losers beat winners by less than a hair at the NYSE and by a rough 8 to 7 at the Nasdaq as composite trading volume decreased on a day over day basis for names listed at both exchanges. Advancing volume took a 40.3% share of composite NYSE-listed trade, but a surprising 51.9% of composite Nasdaq-listed trade.

In an announcement expected as soon as Wednesday, President Biden will offer Ukrainian forces fighting off the invasion of their country up to 30 M1 Abrams main battle tanks as Germany offers Ukraine 14 Leopard 2 main battle tanks, which is considered to be comparable. I believe the leopard 2's are the A6 model. I have not seen which version of the Abrams is being discussed. The Abrams is manufactured by General Dynamics with an engine built by Honeywell (HON) . Significant subcontractors include L3 Harris (LHX) , Lockheed Martin, Leonardo DRS (DRS) , and BAE Systems (BAESY) .

Sarge name Halliburton (HAL) reported on Tuesday morning. Halliburton exceeded earnings expectations for their fourth quarter on revenues that fell slightly short of estimates. The stock reacted poorly, giving up 1.8% for the session.

I am not sure that this was the correct reaction. Then again, I am biased. In the firm's outlook, management sees continued tightness in the oil and gas markets. The firm also sees activity remaining strong... "and service intensity to increase through 2023." The firm also provided a solid outlook over the longer-term while increasing the quarterly dividend to $0.16 for a forward yield of 1.61%. 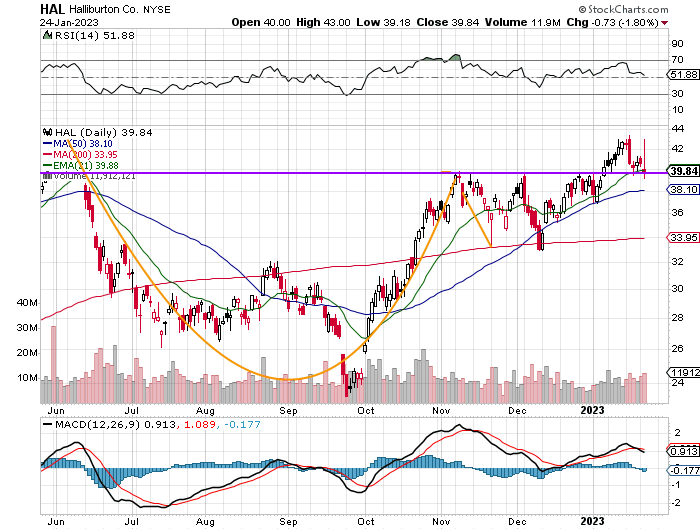 Readers will see that after the failed breakout from the obvious cup with handle pattern, that HAL has now found support at the former pivot, that had served as resistance through November and December. Should this level fail, my intent is to add down to the 50 day line. Should that line also fail, then I bail as well, reducing with the intention to add shares sold during that reduction when 200 day SMA support comes into play.

(MSFT, LMT and URI are holdings in the Action Alerts PLUS member club. Want to be alerted before AAP buys or sells these stocks? Learn more now.)

Get an email alert each time I write an article for Real Money. Click the "+Follow" next to my byline to this article.
TAGS: Earnings | Economy | Investing | Markets | Stocks | Technical Analysis | Trading | Defense | Software & Services | Technology | Oil Equipment/Services