The news? Or is it? As investors, we heard from one of our (my) favorite names (way) back on July 22. Some folks were less than thrilled. I certainly thought the quarter reported to be a good one, especially relative to the quarter being posted outside of mega-cap tech, and silently in and outside of each and every one of our lives. We look at that quarter, as we must, but then something changed on Friday. News? Rumor? Both? Microsoft (MSFT) and TikTok. The same TikTok that has a number of locked down adolescents dancing to their cell phones, owned by Chinese parent ByteDance, and that the Trump administration, as well as a number of public corporations see as a threat to national/corporate security? Yes, that TikTok. On Friday, President Trump mentioned possibly banning TikTok. Over the weekend, Secretary of State Mike Pompeo mentioned broadening such a ban to include other Chinese software operations including the WeChat app created by Tencent (TCEHY).

Does ByteDance need to sell off, spin off TikTok? I guess if it wants to operate within the U.S. (as well as a number of other countries) it may have to. The president seemed to oppose such a deal, though did seem open to the idea of opening a 45 day window for Microsoft and ByteDance to negotiate a deal. I have to admit, as a Microsoft shareholder and fan, this is interesting in a cautious kind of way.

Recalling the firm's fiscal fourth quarter performance beat expectations on both the top and bottom lines, but Microsoft guided quite conservatively in spots. Cash flow from operations which is kind of the most important item in any big tech earnings release in 2020 was very solid, at +16% year over year. If there were any disappointments it was in decelerating growth (still a whopping 47%) at Azure, and the obvious struggles that LinkedIn would be going through with so many necessarily out of work at this time.

Maybe that's just it. Though the platform has been successful, LinkedIn is niche driven. That spares Microsoft from much of the scrutiny that other operators of social media platforms undergo. A TikTok acquisition would certainly change that. Especially if CEO Satya Nadella, who spoke with the president over the weekend (...and whom I consider to be one of those few brilliant types that when they speak, I just shut up and listen), thinks he can get a bargain basement price for something of value. The again, with more than $136 billion in cash, cash equivalents and short-term investments on the balance sheet, Microsoft could overpay for such an item and yawn while doing so.

Does This Deal Happen?

It could. This could also be painted as a victory for an American firm in the international sphere. That could have political value as long as there are no strings where certain data must be stored in certain ways or in certain places. If this is just "take 'em" and do what you want, I think in terms of potential advertising dollars, this has to be seriously considered, and is probably worth a few bucks in terms of stock price. 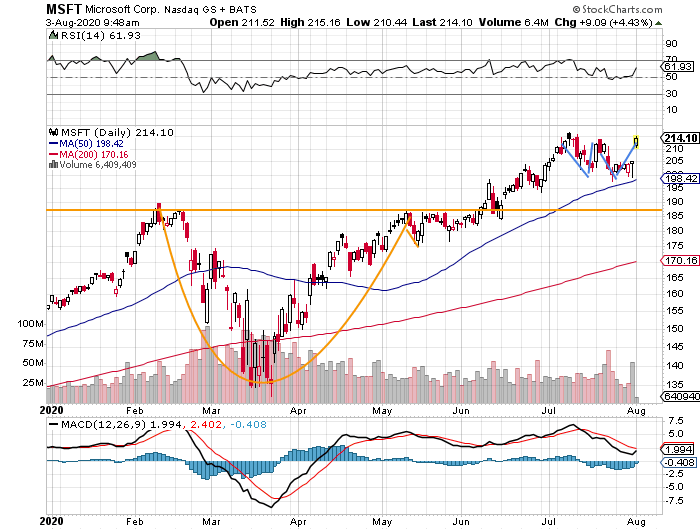 Readers will note this year to date chart for Microsoft. Now this is a little dicey because the deal is still hypothetical, but frequent readers already know that I have come in with a target price of $215. Bingo! Time to make a decision.

To paint the entire picture, I left the cup with handle set-up that provided the 2020 run on the screen. What I want you to see this time is the smallish "double bottom" toward the upper right of the chart after the shares started trading sideways in July. Mind you, the formation is supported by the 50 day SMA as well. Today's action forces some changes. This is what I am going to do.

Get an email alert each time I write an article for Real Money. Click the "+Follow" next to my byline to this article.
TAGS: Mergers and Acquisitions | Investing | Markets | Politics | Stocks | Trading | Digital Entertainment | Music | China