In his third and final "Executive Decision" segment of Mad Money Tuesday night, Jim Cramer checked back in with Sanjay Mehrotra, president and CEO of Micron Technology (MU) , the semiconductor maker that trades at just nine times earnings.

Mehrotra said Micron continues to be in a very competitive marketplace, but he said his company is very different from the Micron of the past, which was very cyclical. Thanks to diversification and proprietary technologies, Micron was able to deliver its second best year ever, despite declining pricing in the market. The company has also bought back $2.7 billion of its own shares, which represents 65% of its free cash flow.

Mehrotra said the long-term technology trends remain strong. In our data economy, he noted, there's strong demand for more memory being driven by computer, communications and the Internet of things. Memory will continue to be an essential part of all these technologies.

In this daily bar chart of MU, below, we can see that prices made a strong rally from June into late September, and then a quick and sharp reaction brought prices back down for a retest of the August low. Prices regained their strength into early November but have stopped short of the September peak.

The trend-following Moving Average Convergence Divergence (MACD) oscillator made a bearish divergence in September by making a lower high when prices made a higher high. The MACD oscillator is pointed down towards the zero line and perhaps a new sell signal.

In this weekly bar chart of MU, below, we can see a less than robust picture. Prices are above the rising 40-week moving average line. Trading volume has diminished the past four months instead of expanding in the direction of the trend.

The weekly OBV line shows a very slight rise the past four months and like the volume pattern this is not very encouraging.

The MACD oscillator is above the zero line but the two moving averages are on top of each other and the next price move up or down could easily generate a buy or a sell signal.

In this Point and Figure chart of MU, below, we can see a nearby price target in the $44-$43 area. 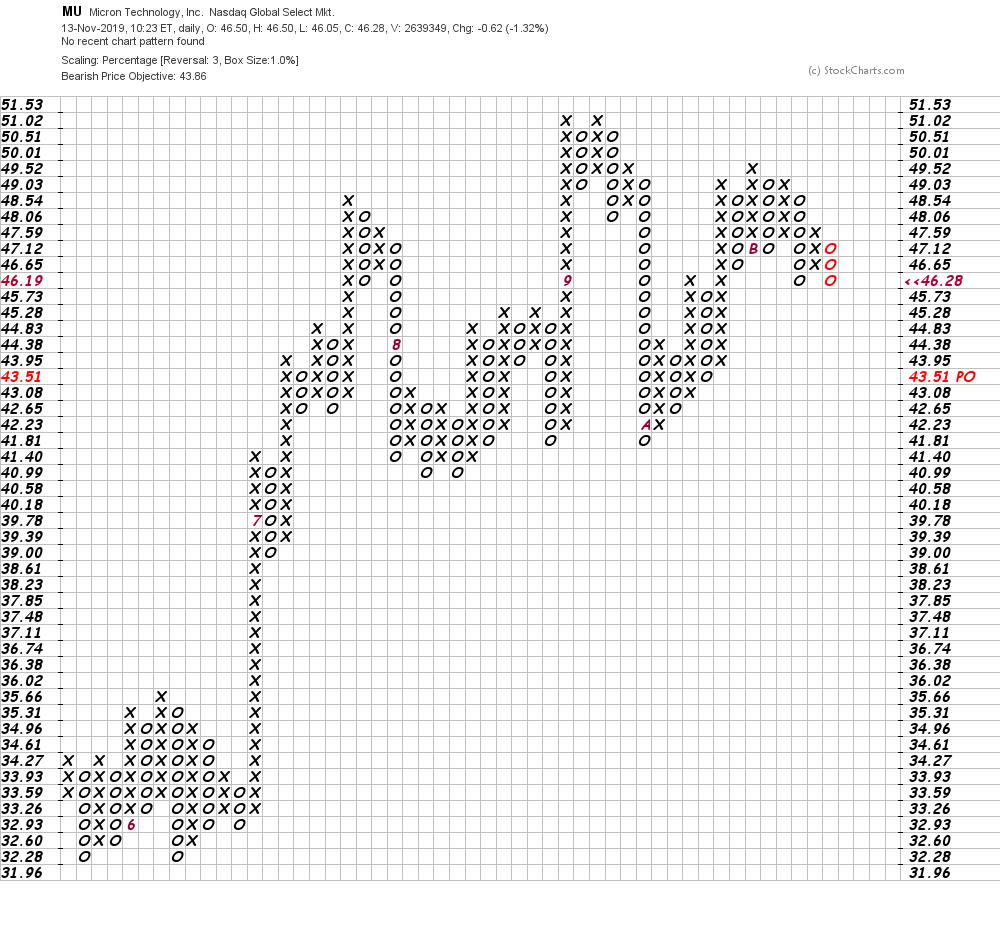 Bottom line strategy: When I see a collection of mixed charts I typically back away and look for charts of other companies that are clearly more bullish. There are thousands of securities to choose from so there is no need to trade ones that don't tip the odds in our favor.

Get an email alert each time I write an article for Real Money. Click the "+Follow" next to my byline to this article.
TAGS: Investing | Stocks | Technical Analysis | Trading | Semiconductors & Semiconductor Equipment | Software & Services | Technology | Mad Money | Executive Interview