Optimism. Precisely what investors needed to hear. Even more than the numbers reported. Even more than the official guidance. It was the fact that when Micron (MU) CEO Sanjay Mehrotra worked his way through his fiscal second quarter earnings call on Wednesday evening that he sounded optimistic. I do not believe that this was your typical corporate dogma. I believe that Mehrotra believes that he and his firm can navigate this environment effectively. Can he? Can we? Not one soul among us accomplishes a single thing without first believing it can be done. As cash flows dry up. As the macro-economic data crashes down around us, this is a story that needs to be told... and repeated.

For the firm's fiscal Q2, Micron reported adjusted EPS of $0.48 on revenue of $4.8 billion. Sequentially, these numbers look like a fifth consecutive quarter of decline, as the firm had to first tackle the semiconductor down cycle, and then go right into the Covid-19 environment. That said, this performance did beat expectations on both the top and bottom lines. Operating cash flow printed at $2 billion, compared to $3.4 billion one year ago, but then again, comps are no longer truly comparable, are they? Interestingly, the firm did go to the tape with adjusted gross margin of 29.1%, well above consensus, even with added expenses made necessary due the spread of the virus that did impact at least two employees.

What this firm sells is memory, and as most of you know, there are two distinct types that the firm sells and tracks. DRAM, the more volatile, more durable but also much faster type of memory, saw a revenue decline of 26% for the quarter, but NAND (flash) saw revenue actually grow 9%. NAND is the more stable, more expensive kind of memory that does not require a constant source of power. Bit shipments increased by 20% for both kinds of memory. Average selling prices were higher for the quarter.

For the current quarter, Micron now looks for sales in a range of $4.6 billion to $5.2 billion, the midpoint of said range would be slightly above the industry consensus of $4.88 billion. The firm also sees EPS landing somewhere in a very wide range of $0.40 to $0.70, again the midpoint just above a broad view of $0.53.

First... The CEO did acknowledge lower levels of consumer demand in China, but also indicated that this reality was "offset by stronger data center demand due to increased gaming, e-commerce, and remote work activity", citing further that demand for the data center was stronger across all markets and that this is leading to shortages. The firm has been shifting its supplies of memory chips toward this need and away from smartphones in response. Mehrotra added that there has also been increased demand for PCs and notebooks as more and more workers carry on from home.

Across the industry, I count nine analysts rated at four stars or better by TipRanks who have made public comment this morning. Among those nine, there are nine "Buy" ratings (or their firm's equivalent), and the average price target for those nine analysts amounts to $68.38. The high target in the group was $100, the lowest $52.50.

A few weeks back when it did finally dawn on me that financial markets had a problem and I narrowed my book significantly, the two chip stocks that I hung on to were Nvidia (NVDA) and Advanced Micro Devices (AMD) . Not that there aren't other good names, I just needed to be real skinny at that time. I do think investors can own Micron. I do like the attitude of this firm and its leader moving forward. The firm is more reliant upon China for revenue than most. That may be a short-term positive. Long-term, I don't know. 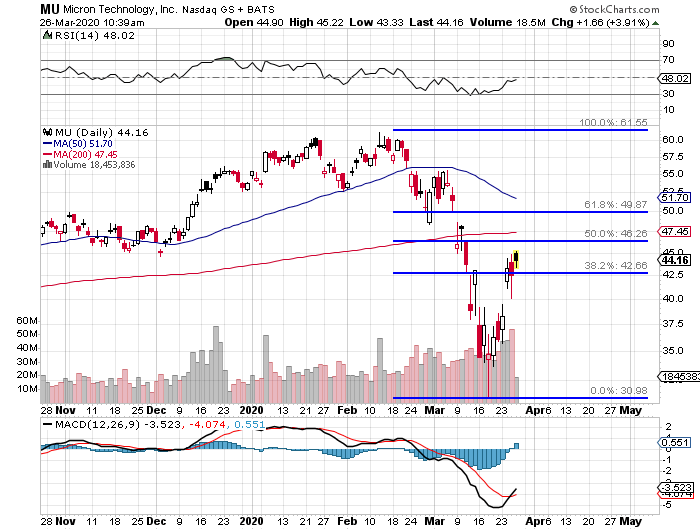 Trader will note a technical boost that has either created or is being boosted by sudden improvements in the daily MACD as well as Relative Strength. However, there is plenty of Fibonacci traffic here in the mid-$40's as well a 200 day SMA ($47.45) that could show resistance. An investor willing to maintain broad exposure to the industry could make room for Micron. If I were to go that route, I would likely write something against the equity long position, such as June $50 calls that right now trade for just under $3. At least that way, net basis would be reduced from roughly $44 to roughly $41. If the shares end up called away in June, the trader calls it a victory with a 21.9% net profit.

Get an email alert each time I write an article for Real Money. Click the "+Follow" next to my byline to this article.
TAGS: Earnings | Investing | Markets | Stocks | Technical Analysis | Trading | Semiconductors & Semiconductor Equipment | Technology | Coronavirus