Micron Technology (MU) did little to alleviate the battleground nature of its share price. After the bell on Thursday, the company reported earnings per share of $0.56 versus expectations of $0.49, with revenue of $4.87 billion easily surpassing the consensus estimate of $4.57 billion. Great numbers on the surface, but shares were trading lower around 9% as we head into Friday lunchtime because of guidance.

Management called for first quarter earnings per share of $0.46 give or take $0.07 per share as compared to the current $0.48 estimate. The real struggle here is the comparison against Micron's whisper number. Some on the street had that number as high as $0.70 in anticipation that memory inventory depletion was complete and demand would return to a more normalized level. While revenue estimates of $5 billion, give or take $200 million, land ahead of the current $4.76 billion market estimate, gross margins are weighing heavily on the bottom line. The midpoint lands at 26.5% with a range of 25% to 28% versus estimates of 28%.

Micron indicates that industry demand is beginning to move higher, but near-term macro issues as well as trade uncertainties weigh on business. The drop in gross margins hints that either Micron is eating tariff costs or the inventory in memory semiconductors isn't as depleted as the most optimistic analysts discussed in their upgrades this morning. It's fair to note the analyst community is very split on Micron.

Despite NINE price-target increases, there wasn't much in the way of an upgrade. And when you examine the details of the price-target increases, some could be classified as back-handed compliments. Citi raised their price target to $30, but reiterated a Sell. Piper Jaffray raised their price target, but said they are remaining on the sidelines. Baird matched Citi's $30 target. Nomura/Instinet raised their target to $40. With Micron trading around $44, none of these are ringing endorsements to buy the stock. We did see price targets of $59, $60, and $80, so clearly there are some bulls on the name.

The question of DRAM and NAND demand is difficult to answer. As investors we continue to hear trumped up talk about 5G and how many companies will benefit. Micron should see an uptick in DRAM, but exactly when and at what price is the big unknown. With such a wide range of price targets and views on the stock, it makes me believe Micron might actually be fairly priced where it currently sits. 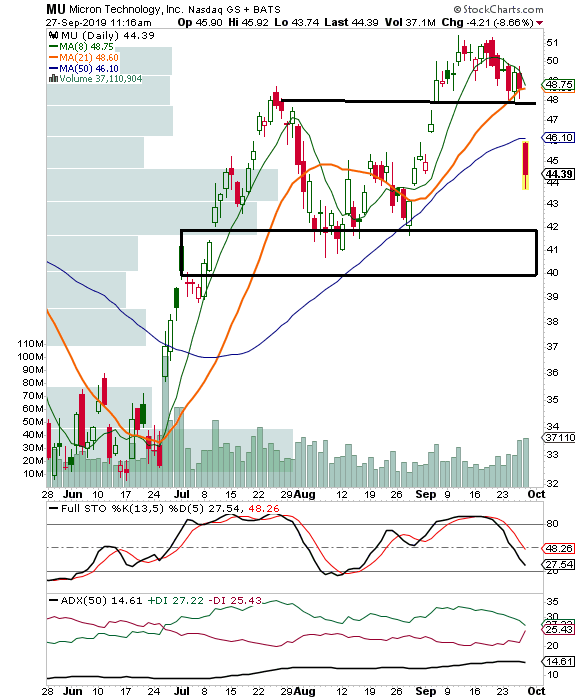 Based on the weekly chart, I'm anticipating we'll trade $40 to $42 on the low end and $48-$50 on the high-end until we see another earnings report. I would consider buying an overshoot of the $40 downside, so anything in the $36 to $38 range while taking profits or trailing long positions aggressively on any move into the $50 to $51 area (overshoot on the upside). I don't see a reason to jump long into the weekend, so I'd sit back and see what the trading into early next week brings before establishing any new trades in Micron.

Smartphone Demand Appears to Be Getting Hit Hard

With retail stores shut and many consumers viewing smartphone upgrades as discretionary purchases, signs are mounting that smartphone demand has fallen sharply in recent weeks.

Unpopular Opinion: Copper Will Soon Be a Better Buy Than a Sell

Where there is pain there is also opportunity.