Disney (DIS) is seeking to line up Wall Street analysts as the newest members of the Mickey Mouse Streaming Club today. The company is expected to discuss its streaming service of TV shows and movies, hopefully providing some guidance on content and costs of the family-friendly offering set to launch later this year. Disney will be taking on Netflix (NFLX) head-on with AT&T (T) and Apple (AAPL) looming in the background as additional competitors. Don't forget Amazon (AMZN) exists in this mess as well.

Unfortunately, I don't think there are many new angles anyone will be able to offer on Disney. We already know the company has burned a billion dollars with HULU and BAMTech. We'll add to that the $150 million in licensing revenues they will forego moving forward as they remove their library from Netflix. Fortunately, we're talking about a company with profits 10x those numbers. Folks can complain about ESPN's lackluster performance or the costs of building a streaming service all they like, it won't slow Disney. The company kicks off its service with one thing Netflix lacked: it's own library and a history of producing its own original content. With the addition of Fox, Disney holds a plethora of characters and stories to draw from for existing and new content.

The one aspect I've liked from Netflix is how it has been able to take old content and spin it into something original. Recent examples like Riverdale and Sabrina have taken light-hearted content aimed a younger crowd and turned them into darker shows. It plays way to the angsty teen viewer and works for adults. It will be interesting to see if Disney stays with more light-hearted. Given the chatter around new Monster Inc, Star Wars, and LOKI shows, I would anticipate them staying on that side of the road. It should create enough diversity where both DTC streaming services can succeed.

Additionally, Disney will be rolling out two Star Wars themed lands in their domestic parks this year. I would imagine the company could capitalize on some cross-marketing and the amount of subtle advertising it will be able to do on Disney+, its streaming service, could help both parks and merchandising. Where ESPN will fall into all this remains to be seen. Can a streaming service breath life back into SportsCenter? I don't see it getting a big boost, but it should help clot the bloodletting. 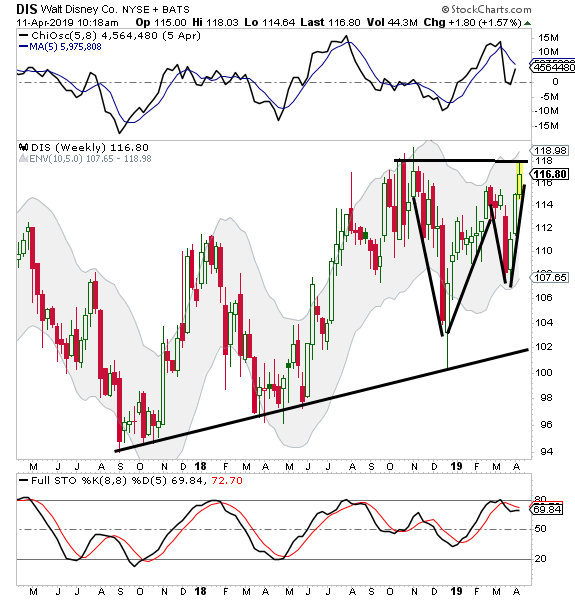 We're seeing a bit of profit taking into the meeting. The highs from last fall continue to act as resistance although the higher lows should offer bulls a morale boost. It is most likely we'll see a continued tightening range until the highs are broken or the stock completely falls apart. I'm leaning heavier towards the prior rather than the latter as I look for Disney to make its way to $125 by the end of the summer.

Get an email alert each time I write an article for Real Money. Click the "+Follow" next to my byline to this article.
TAGS: Investing | Stocks | Trading | Consumer | Movies | Resorts and Hotels | Sports business | Analyst Actions | Stock of the Day