The Big Red One

6 June 1944. "The ramp went down and we were in water over our heads. Some of the men drowned. Some got hit by bullets. The boat next to ours blew up. Some of those men caught fire. We never saw them again. When we got to the beach, I said to one of my men, Cpl. Meyers 'If there's a hell, this has got to be it' And it was about a minute later that he got a bullet in the head. To make a long story short, only seven of the 31 men on my boat made it to the beach."

(excerpted from the Chicago Tribune 6 June 2004)

Both Mexican and U.S. officials met in Washington on Wednesday. The general takeaway was that both sides felt that progress had been made. Mexico's Foreign Secretary even sounded optimistic later when speaking from the Mexican Embassy. The problem is this. The 5% tariff on all goods entering the U.S. from Mexico goes in effect on Monday, and that percentage will rise monthly thereafter until hitting 25% on October 1st, unless one man is satisfied. That, man, the president of the United States, is clearly not satisfied. From the Emerald Isle, President Trump tweeted.

The president, clearly is trying to force Mexico into aggressively slowing the flow of illegal immigrants across the southern U.S. border. Gang, there's a lot to understand here, or a lot to misunderstand. The president's plan offers no metrics, by which Mexican leaders can check off accomplishments toward reaching a goal, he just demands results. Anyone who has spent just one day on Wall Street understands that, but most normal people do not. The president moves without support from legislative leadership, even those of his own party. The Department of Homeland Security reports that U.S. Border Patrol apprehended 132,887 individuals illegally crossing the border in just May alone, the highest level in more than 10 years. Of that number, 11,507 were children either travelling alone, or abandoned once trouble showed up.

Further complicating the matter is the fact that many of these migrants are from countries south of Mexico, such as Guatemala, Honduras, and El Salvador, simply travelling through Mexico as the labor market in the United States has tightened over the past two years. It is likely at Mexico's southern border where President Trump would need to see overt signs of progress, instead of words spoken after a meeting in D.C.

My Thought... I will say this. Equity markets have rallied fairly significantly over the past two days, which even if deteriorating conditions end up provoking a rate cut at the FOMC, could be an inappropriate response to a broad margin squeeze that will impact corporate America. According to FactSet, for the S&P 500, aggregate Q2 Earnings are expected to print around -2.1%. If realized, that will officially put the U.S. in an "earnings recession." Earnings are expected to return to growth for Q3, albeit just barely... at 0.3%. Revenue generation is expected to run at just above 4% growth throughout.

Now, Q2 will not be impacted. There's no time, but if these tariffs actually kick off on Monday, and go to 10% on July 1st, you can kiss Q3 good bye, and then Q4 becomes a problem as well. You will see a further slowdown for Cap-Ex that badly hampers business to business revenue generation. What does that mean in simple terms? Less profit on less dough. The president is playing chess with the Fed, as well as with corporate America. If it works, then he is undeniably brilliant. If not, well... then we have a problem.

Financial markets are trying to price in a lot right now. I know as I try to run my book at once again increased cash levels, and in a much narrower scope than I had expected just a month or so ago. Yet, I try to stay exposed to where I think money has to flow. Somewhat difficult in an ecosystem where knee-jerk and momentum are both created, and then enforced by algorithms written with an intent to quickly profit in small doses over and over again. No thoughts given to investment, or traditional trading. In fact, no thoughts given at all, not in real time anyway.

That's sort of the problem I see from 10,000 feet. While markets have wrestled with tepid optimism over trade with Mexico, less optimism over trade with China, a whole lot of optimism that the Fed will act to at least undo the obvious error of December and somewhat alleviate the yield curve. Part of that means understanding that an error was made, so this may go slower than folks think. As high inventories and slowing economic growth impact WTI crude prices adversely, for the Fed, the overt take-away will be the damage done to headline consumer level inflation. That's why the broader market has loved weaker oil pricing. Think about it... the Railroads should not rally more than a percent on a day that WTI Crude falls by more than a percent. Yet, they all pretty much did.

The truth hurts, and the truth is this. The broad equity indices have now rallied nicely for two consecutive days. However, trading volume at both the New York Stock Exchange and the Nasdaq was lower on Tuesday than it was on Monday, and lower on Wednesday than it was on Tuesday. In fact, at both exchanges declining volume beat advancing volume despite what the headline indices tell you. What is clear over two days is that there is still a lack of institutional participation in this rally. This rebound can not become a change in trend until the big money decides to jump back in. Until then, We stand in a state of correction, and this would be short-term trading opportunity and nothing more.

Can this move become trend? Of course it can, my point is that the decision makers that matter are unconvinced. We can still see higher prices on higher volume. Do we root for a weaker employment report on Friday after that atrocious ADP number? Some folks certainly are.

Oddly enough, after an April that presents as something akin to a macroeconomic beat-down that turns the coming data for May into quite crucial information, the Fed's Beige Book reads as somewhat optimistic. I really did expect some gloom and doom. All 12 Fed districts reported modest growth, which would be an uptick from the last Beige Book released on April 17th. After this Friday's Jobs data, those rooting against the economy, in order to force the FOMC to act sooner rather than later, will also have to root against Retail Sales, Industrial Production, and the CPI, all for May, next week ahead of the Fed's policy meeting on June 19th.

Do I think the FOMC should reduce the Fed Funds Rate? Yes, I think they should come clean, admit that the December hike was pure foolishness, and state that the move is just to correct error, to help assist in the repair of the yield curve, not in response to current domestic economic conditions. By the way, rooting against the economy is rooting against America. Real people really get hurt. Don't ever do it. Not ever.

In what I thought to be interesting news, Peloton Interactive Inc. used the confidential filing provision of the Jumpstart Our Business Startups Act, as a step toward a possible initial public offering, perhaps in 2019. I know that this craze has taken hold across the business of fitness, but to tell you the truth, I don't see it.

Imagine spending somewhere between $2,245 to $2,700 on a stationary bike, and then subscribing to a monthly streaming service for $39 per month. That's a bit (actually absurdly) pricey for Joe and Jane Doe in my opinion. Now, just for the sake of comparison, let's say one wants to purchase a good spin bike. Searching for Schwinn spin bikes, I see that they are still pricey, but even top of the line prices for the most part come in well below the low end of the Peloton range. So, saving hundreds there is possible. You like the streaming instruction you say? Okay. So, I price the Les Mills (named for the famous Olympic athlete from New Zealand) on Demand classes, basically because I have heard of them. Hmm $14.99 a month.

Are these substitutes as good? Who cares? Being fit comes form personal discipline, and an ability to eat right while staying highly motivated. I guess gadgetry can help. Nothing works unless you stick to it.. and eat your veggies.

Anyone else notice the "above trend" pop for the Defense and Aerospace industry on Wednesday? In what likely amounts to an escalation of the brewing Cold War with China, Reuters reported that an informal notification had been sent to Congress that the U.S. was considering the sale of a large basket of arms to Taiwan. This is separate from Taiwan's already made request to purchase 60 F-16 fighter aircraft (Lockheed Martin (LMT) ).

This informal notification would include a large purchase of M-1A2 Abrams main battle tanks (General Dynamics (GD) ) to replace Taiwan's M-60A1's. Oh, how I loved those. In addition to the tanks, there are hundreds of Javelin missiles (Raytheon (RTN) , and Lockheed Martin) in the mix as well as more than a thousand TOW or what is now referred to as ITAS anti-tank missiles (Raytheon). You may not like it, but chameleons we are, and chameleons adapt top the environment provided. 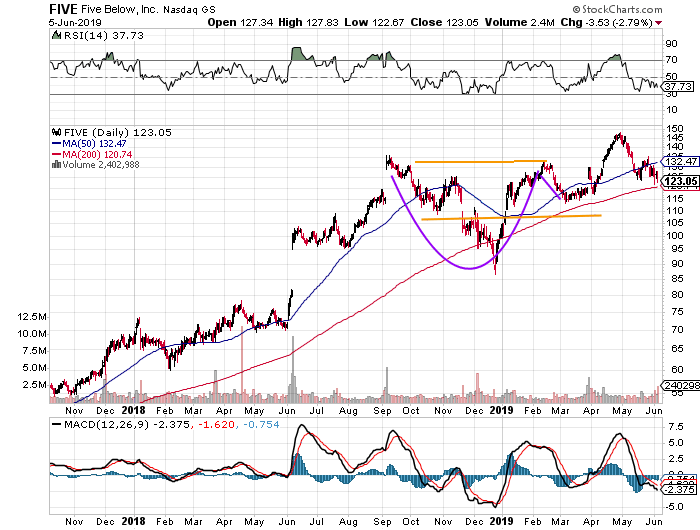 Remember that Five Below (FIVE) trade that I gave you back in late March as the stock broke out of a Cup with Handle pattern? The trade worked like a charm, and speaking for myself, I made a few sales after the stock failed to reach my $160 price target. However, I still leave 25% of my position. Still above basis, but well below where I should have been over and out with this name.

Last night's earnings were not bad, actually, they were quite good, and the business model should serve them well if the economy goes into a tailspin. That said, the firm acknowledged that tariffs on Chinese exports to the U.S. are going to force them to raise prices. As I am looking for ways to narrow my book, and even for the balance of this position, this is a win, after the firm guided the mid-point of Q2 revenue generation in lackluster fashion, I will be taking my leave of the name after the open should the overnight strength persist.

(Five Below is a holding in Jim Cramer's Action Alerts PLUS member club. Want to be alerted before Jim Cramer buys or sells FIVE? Learn more now.)

Get an email alert each time I write an article for Real Money. Click the "+Follow" next to my byline to this article.
TAGS: Earnings | Federal Reserve | Investing | Markets | Options | Stocks | Technical Analysis | Trading | Defense | Stock of the Day

The streaming giant's numbers and commentary were arguably just good, rather than amazing. But with its stock having underperformed for months, that's all that markets needed.