Apple (AAPL) through its efforts to protect consumers, severely damaged the trajectory for advertising sales revenue that all social media companies had been on. Meta is different now. The stock market is different now, with short term rates on the rise, and the monetary base on the decline.

Tech stocks, and communications services companies generally do not do well in such an environment. The stock does trade at a "beneath the market" 15 times forward looking earnings. There is no dividend. The stock is down 60% in just about a year's time and down 53% since early February this year. Let's explore.

META reports in about six weeks. Wall Street is looking for GAAP EPS of about $1.90 on revenue of $27.6B. These numbers if realized would be good for earnings "growth" of -41% on revenue "growth" of -4.8% from the year ago comps. For the second quarter, META posted GAAP EPS of $2.46 on revenue of $28.82B. These top and bottom line numbers both fell short of Wall Street's expectations and both represented year over year contractions. In fact, META has suffered a year over year earnings contraction for three consecutive quarters now.

Total assets add up to $169.779B. This includes "goodwill" and other intangibles totaling $21.194B. This is certainly not abusive in any way. Total liabilities ended the quarter at $44.012B. This included no debt. Meta stood at the end of the quarter with a tangible book value of $38.77 per share. That's pretty darned good. The balance sheet is golden. You just don't want to see the trends now visible on said balance sheet to continue.

Meta guided expenses (and headcount) lower, and offered revenue guidance at the time. Wall Street's expected $27.6B for Q3 is above the mid-point of that guidance.

In the call after those earnings CEO Mark Zuckerberg said that time spent on Facebook Reels increased 30% and that Reels had crossed the $1B annual revenue run rate. Remember, Reels is the Facebook competitor to TikTok. Relations between the US and China have continued to deteriorate. With Facebook still banned in China, it is reasonable to consider that TikTok might still end up banned here in the US. That would be a positive for Meta.

The firm repurchased $5.08B in common stock during the second quarter, and left $24.32B available for the repurchasing of stock going into Q3 under the current authorization.

This morning South Korea's Personal Information Protection Commission fined Meta KRW 30.8B over violation of that country's privacy laws. The fine is inconsequential, close to $22.1M in USD. The point is that everything from privacy laws to antitrust regulation will be a persistent issue with all of the large social media companies for the time being. It may never truly come to a head, but it will probably never go away as a threat either.

Yes, Meta Platforms is a cheap stock relative to the marketplace. However, at least for now, this is not a growth stock. It is still a free cash flow machine (though less so than it was) and is now priced more as a value stock than a high flyer. Probably as it should be as social media evolves away from something amazing and toward something far more utilitarian in nature. Might mean that a dividend could be more useful in attracting income investors than the massive buy back in place is. 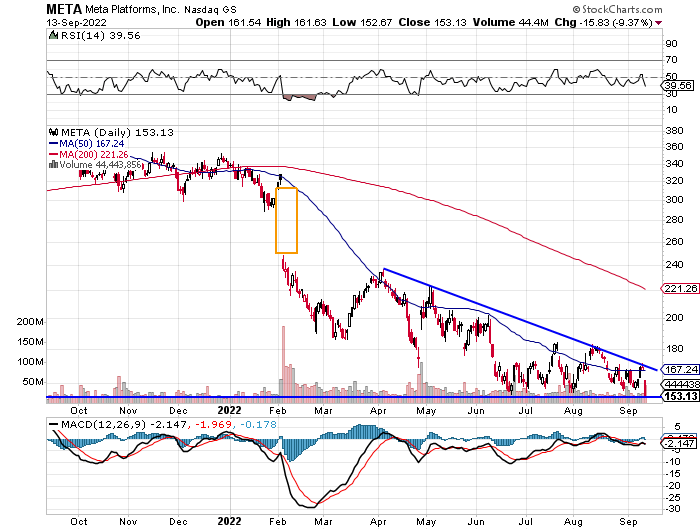 Support at $153/$154 has been tested repeatedly since mid-June as the stock's highs get lower and lower. If $153 holds, the bulls have a shot. However, should the bears finally kick that door open, with both the 50 and 200 day SMAs still trending lower, the algos will feast on this name. I am bearish for the short to medium-term. META reports on October 28tth.

Get an email alert each time I write an article for Real Money. Click the "+Follow" next to my byline to this article.
TAGS: Earnings | Investing | Stocks | Technical Analysis | Trading | Value Investing | Media