Ever try to re-lace a shoe using a shoelace with a damaged aglet? Nearly impossible to force the frayed ending through the tiny hole. How about trying to sweep a kitchen floor using an old, badly damaged straw broom? Almost makes the place messier. Oh, and the dust balls. That's our marketplace right now. Messy. Difficult to re-organize. On Wednesday, the Nasdaq Composite actually put together a positive close. Didn't feel like it. The index finished close enough to the day's lows. Losers beat winners, and declining volume beat advancing volume at the Nasdaq Market Site. Still, on the strength of the Information Technology sector, supported by both semiconductor and software names, both that headline index as well as the Nasdaq 100 put some green on your screen.

Markets were far uglier elsewhere. The Dow Jones Industrial Average, not truly significant within the financial industry due to its narrow focus, but truly important in terms of public sentiment, closed below its own 200 day SMA for a second consecutive day. Our broadest large cap index, of course is the S&P 500. When one hears a trader say the market is up or down so many points, this index is usually what they are referring to. The S&P 500 closed on Wednesday near to the bottom of the day's range for a second straight day, and at 3,116, now stands 8.2% below the highs made the Wednesday prior. This may not yet be a technical correction by definition, but I really don't count on these definitions for much. 10%, or 20% (for a bear market) are really just numbers. This is about the intersection of smarts and guts. Yes, guts. Judging from what I hear, and what I read, our equity marketplace is in a correction.

How can I say that? Greatly increased trading volume over the past five "losing sessions", heavily skewed toward distribution, and spread across the marketplace fairly evenly. Yes, over just the past week, using the SPDR Select Sector ETFs as a measuring stick, the Energy sector (XLE) is down 12.7%, and Information Technology (XLK) , even after Wednesday's gain is down 9.8%. That said, those sectors perceived as either bond proxies, or defensive in nature have also been smacked around. The REITs (XLRE) , Utilities (XLU) , and Staples (XLP) , have all backed up 3% to 4% in just this past week, while the six sector ETFs not mentioned have all surrendered between 6.5% and 8.5%. That's severe.

Trouble With The Curve

I thought it very interesting that demand for the U.S. 10 year has driven that particular yield down below 1.3% overnight. In fact, as I bang out this very early morning note, the 10 year is retesting this area of resistance for a fourth time in just a few hours. This would be since investors already knew that South Korea's central bank had very surprisingly left its benchmark interest rate unchanged. My first thought, as I read that news was that perhaps that central bank was tossing the ball over to the government to force fiscal stimulus. I was not sure how Asian and European investors would take this. As I have conveyed, I believe that here in the U.S., that the Federal Reserve and Treasury Department are going to have to coordinate on policy meant to provide essential liquidity, allowing potential for the greatest available capital at the lowest possible cost, while also removing all barriers to velocity of transaction under their control.

What we have witnessed in recent days, would be Wall Street and corporate America in aggregate finding great difficulty in quantifying what is clearly at this point, unknowable. As the flow of capital has scrambled into the perceived safety of the market of U.S. Treasury securities, that flow has now quite decisively been pulled out of equities. Not surprisingly from areas of commerce already suffering overt negative impact, such as the Airlines... 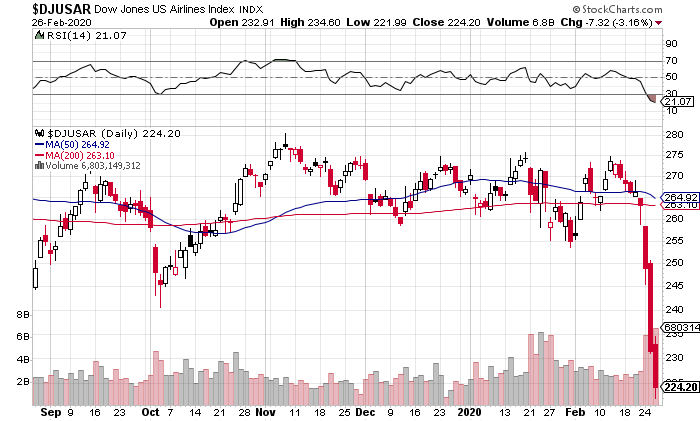 or Travel and Tourism... 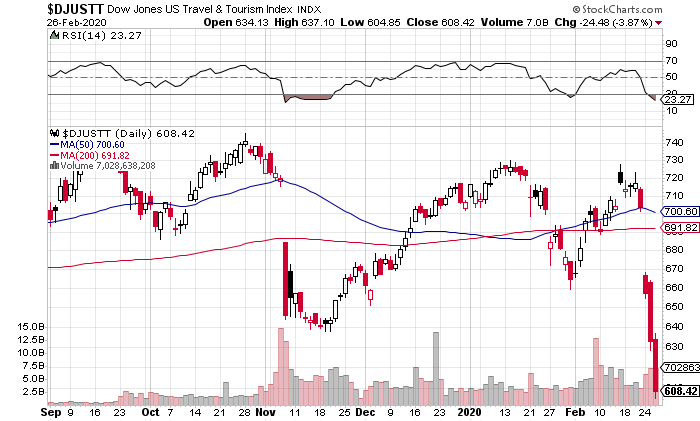 ... but, we also observe small caps and mid-caps under great pressure. 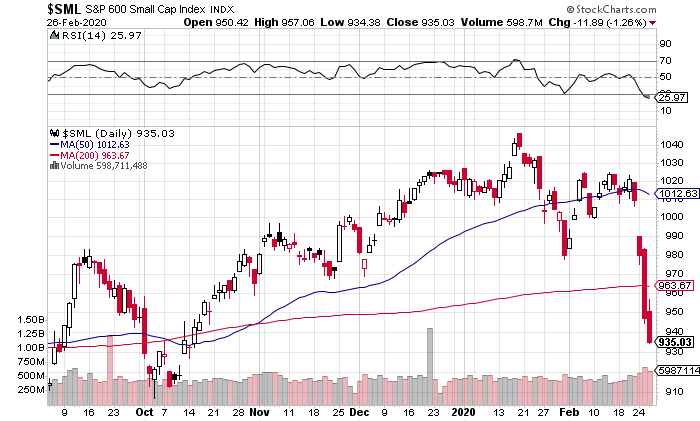 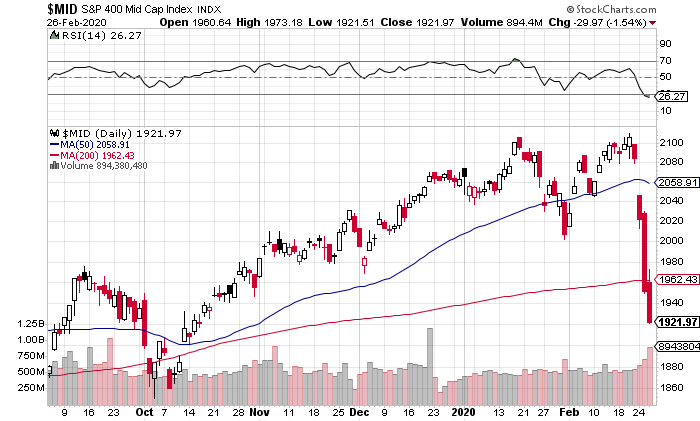 What this suggests is that the lack of a more globalized business is in no way, a safe haven, even if the U.S. Dollar Index (DXY), though down this week, stands up 2.3% year to date.

For those keeping score, and we all should be at this point, the CBOE Total Put/Call ratio went out on Wednesday at 1.23, the fourth consecutive day at 1.1 or higher. This would be compared to a 50 day SMA of 0.86. The crucial 3 month/10 year yield spread? Went out on Wednesday at -20 bps. I see it this morning at -21 bps. This spread has been inverted since Valentine's Day. How sweet.

The nation does have a new Covid-19 response czar, and that would be Vice President Mike Pence. Whether that's good or bad, we'll know later on. The point is that there is indeed someone who is on point, who will be accountable. That's important. We also learned that on funding the nation's response that there will be a bipartisan effort, which should be at least somewhat comforting given the political climate that has permeated the nation for several years now.

Members of both parties in both houses of the legislature have met to discuss funding, and there does seem to be a willingness to provide more, perhaps far more than the $2.5 billion ($1.25 billion in new funds, $1.25 billion in re-purposed funds) in emergency money that the Trump administration had asked for. There is also a possibility that given the lack of available tests for this virus, that health labs operating on the local or state levels will be permitted to design tests of their own. We may not want to learn what they find out.

While the presidential press conference dragged on, nearly simultaneously, we learned that the CDC had confirmed the first possible case (in northern California) of what the nation has perhaps feared the most... community spread. The patient who tested positive has no travel history suggestive of exposure, nor has been exposed to any other known patient. Does this mean that individual risk of exposure is no longer "low"? How can we know? Instinct says not to overreact. Instinct also says "wash your hands" and wipe off that bench at the gym. In fact, workout by yourself. Hey, Peloton (PTON) is suddenly hot again.

The overnight longs in both Apple (AAPL) and Amazon (AMZN) that I have discussed this week in print, on financial television, and on Twitter had worked out very well on Tuesday and Wednesday mornings. I did not like the way tape behaved going out last night, and both of these stocks closed up for the day, hence I did not feel compelled to try going for a third day. I went home, and am still flat both (at least for now). I will be on the Claman Countdown at Fox Business later today, and I'll update if appropriate.

The Sarge book has suffered three panic point violations this week. Goodbye to Citigroup (C) at a profit, Cisco Systems (CSCO) , and Wells Fargo (WFC) both at acceptable losses. All three closed last night well lower than where I took my leave and are trading even lower in overnight trading.

Did it feel good to take "acceptable" losses? Of course not. Did it feel good to turn a smaller profit than I should have in Citigroup? Of course not. This is what panic points are for, folks. To enforce one's own code of discipline when emotion begs to act differently. There is no room for emotion in this game. Never. We are mercenary in all things we do. Target prices and panic points on everything. Forces the trader to ring the register, while also avoiding a visit from the ugly stick. Subsequently, I now have some exposure to the financials, but none to the banks. I will have to pick something up along the way.

That brings us to long-time Sarge fave Microsoft (MSFT) . What now? You already know that I think highly of the business, that I think CEO Satya Nadella is probably the smartest kid in the room, every time he is in a room. On Wednesday evening, the firm warned that the Personal Computing business segment would likely fall short of already widened revenue expectations for the current quarter. The segment includes Windows, Surface tablets, and the Xbox line of gaming consoles. Not a demand problem, the firm stressed, but a supply issue due to the impact of Covid-19 in China.

As an investor, I can be patient as long as I know that the demand is there. The problem is the chart. Let me show you. 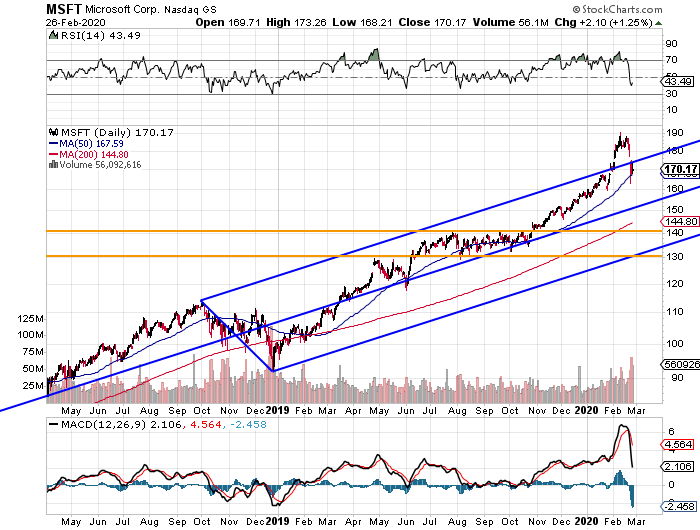 As readers can see, this is an updated chart of one I have shown you in the past. The post earnings, upward spike broke the name up above the higher trend line of our Pitchfork. That could have been spectacular technically, and might have been had the entire market not been impacted negatively this past week.

The problem is that this spike pulled the 50 day SMA considerably higher with it, and now, as you can see, as we zoom in... that the shares have been testing that line for three days. 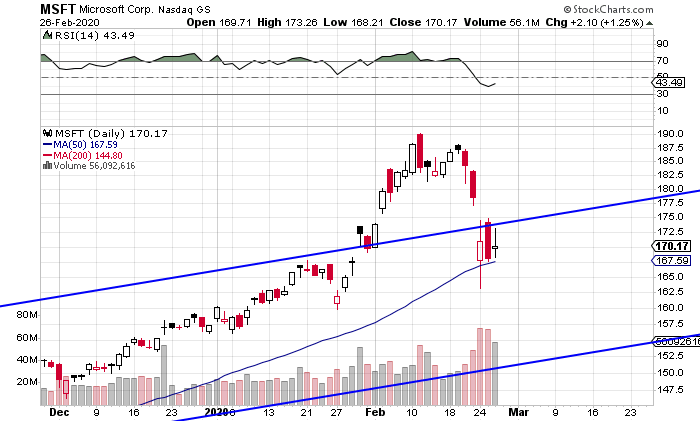 The last sale that I see tonight/this morning is $166.00, which violates that level. What do I do now? Well, I am going to wait for the opening bell to see just what happens when Wall Street wakes up. That said, I can't add this far above net basis without at least showing some finesse. I've had this position for a long time. My panic point is $156, as that was the 50 day SMA just after that recent earnings release.

If the shares should open below the current 50 day SMA , a number of portfolio managers may be forced by their risk managers to reduce exposure. What I am thinking of doing is this... getting short a March 20th strangle (sell calls, sell puts) with strike prices roughly $10 above and $10 below the last sale, if I can get paid at least $5 in aggregate premium to do so. This essentially would be attaching covered calls to the equity position, while exposing myself to an add in a month at a price I see as a discount, all while reducing my net basis. Just an idea. Let the games begin.

Get an email alert each time I write an article for Real Money. Click the "+Follow" next to my byline to this article.
TAGS: ETFs | Investing | Markets | Options | REITs | Stocks | Technical Analysis | Trading | Treasury Bonds | Stock of the Day

Is it more rallying to suck more people in? Or is it a rollover that will spit out those 'Sentiment Tourists'? Let's take a look.