By BRUCE KAMICH Sep 11, 2019 | 10:34 AM EDT
Stocks quotes in this article: MRK
During Tuesday night's Mad Money program, Jim Cramer looked closer at drug maker Merck & Co. ( MRK)  which had been riding high on the success of its newest cancer drug, Keytruda. Shares had risen from $73 in April to over $87 just a few weeks ago. But as the market panicked about the possibility of an economic downturn, shares of Merck skidded $5 in just two days. Cramer said Merck is a buy, given the company's strong balance sheet and bountiful dividend yield that pays more than Treasuries.
Let's visit with the charts and indicators to get another perspective.
In this daily bar chart of MRK, below, we can see the recent sharp downward move in prices. Every move is a little different but this looks similar to the decline in April which tested the rising 200-day moving average line. Prices have also closed below the cresting 50-day moving average line.
The daily On-Balance-Volume (OBV) line does not show increased selling ahead of this decline and the 12-day price momentum study only shows a minor bearish divergence last month. This is not the kind of set-up that I would normally worry about.

In this weekly bar chart of MRK, below, we can see that prices retreated to test the rising 40-week moving average line.
The weekly OBV line has been strong since late 2017 but the 12-week price momentum study has been weakening for months even while prices continue to rise. This is a large bearish divergence and it is a heads up to watch prices closer.

In this Point and Figure chart of MRK, below, we can see a potential downside price target of $71 being projected. 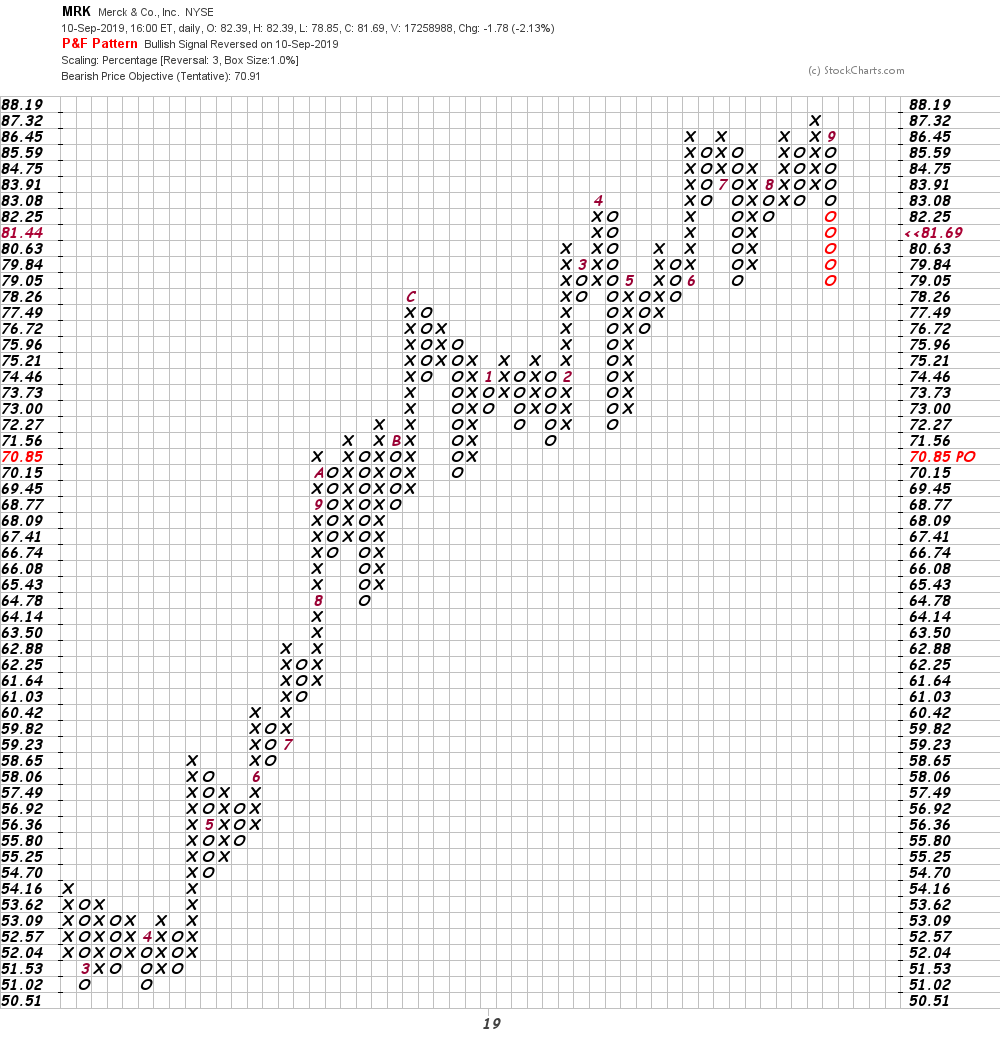 Bottom line strategy: Even though the Point and Figure chart projects a risk to $71 on MRK, we also see plenty of potential support below the market. A period of sideways price action is likely before renew gains.
Get an email alert each time I write an article for Real Money. Click the "+Follow" next to my byline to this article.
TAGS: Investing | Stocks | Technical Analysis | Trading | Pharmaceuticals | Mad Money