Readers know that I have been all in on the various biotechs and big pharmas that have been working on finding either vaccines and/or therapeutics related to either treating or just plain avoiding human infection with the SARS-CoV-2 coronavirus that caused the disease known as Covid-19. I have been in and out of Gilead Sciences (GILD) for some time now. I have been in and out, mostly in, on Moderna (MRNA) . I have been in Johnson & Johnson (JNJ) as well as Pfizer (PFE) . I have dabbled in Novavax (NVAX) solely through the use of options spreads without holding equity. In other words, when the scientists win this fight, I want to be on their team.

I have been long Merck (MRK) for a long time, since way before this pandemic became part of our lives. That's based on a number of candidates, or work on special cocktails meant to treat various types of cancers as well as other maladies. Just last week there was news of a collaboration between Merck and AstraZeneca (AZN) on the prostate cancer front. The stock has not, however... performed all that well this year, and on many an occasion, I really came this close >< to liquidating the position, as the firm mostly remained silent on Covid-19, and I had come close to being overexposed to the group. The silence is over.

Not the Moody Blues song. That's not until later. Merck released an absolute plethora of news on Tuesday morning regarding the firm's efforts to take on the coronavirus. The efforts mentioned this morning are threefold, two aimed at vaccination, and one, which really catches my interest, aimed at treatment. Let's go through what we know.

One... Merck will acquire Themis Biosciences, an Austrian developer of various vaccines and immunomodulation therapies for infectious diseases, which includes work of Covid-19. This Themis program has already been under way using a modified measles virus as a vector. Phase 1 trials for this effort are expected to begin within weeks.

Two... Merck announced a collaboration with IAVI (International AIDS Vaccine Initiative) to develop a Covid-19 vaccine. This vaccine that uses the same technique that Merck used in the creation of Everbo, the firm's vaccine for Ebola. Phase 1 is expected to begin later this year for this model.

Three... Merck also announced a collaboration with Ridgeback Biotherapeutics meant to develop an antiviral candidate known as EIDD-2801. Under this deal, Merck secures exclusive global rights as well as a share of eventual proceeds. Once approved, clinical development, navigating the regulatory environment, and manufacturing to scale all become the responsibility of Merck.

Investors know that I have been touting the approach taken by both Moderna and Pfizer as I became aware of these efforts as they use newer messenger RNA technology, that even if really unproven coming in, can be developed and produced much more rapidly than vaccines reliant upon traditional means. Merck CEO Ken Frazier, who will be visible across financial media platforms on Tuesday, opened up over the weekend. He let us know that Merck's scientists have been on the job for as long as they have been aware of this coronavirus. Merck also wanted to go down the path of already proven technology, which ends up looking pretty smart from a global perspective, if the newer kind of vaccines either fail, or become less effective over time.

Frazier is quoted on the Barron's website this morning as saying, "We've got to immunize seven billion people on the planet, if you have a dose that gives you a high amount of neutralizing antibodies with a single dose, that's a much better, more simple to deploy vaccine, than one that requires multiple doses."

Now, what I find most interesting is the therapeutic effort. On this candidate, which is already in Phase 1 clinical trials, Frazier said, "We know from the work that's already done already that it's very potent, that it blocks the reproduction of many RNA viruses, including SARS-CoV-2." The best two characteristics of this treatment if approved would be that apparently the firm feels that this drug would be readily scale-able, as well as orally deliverable, which would be huge. 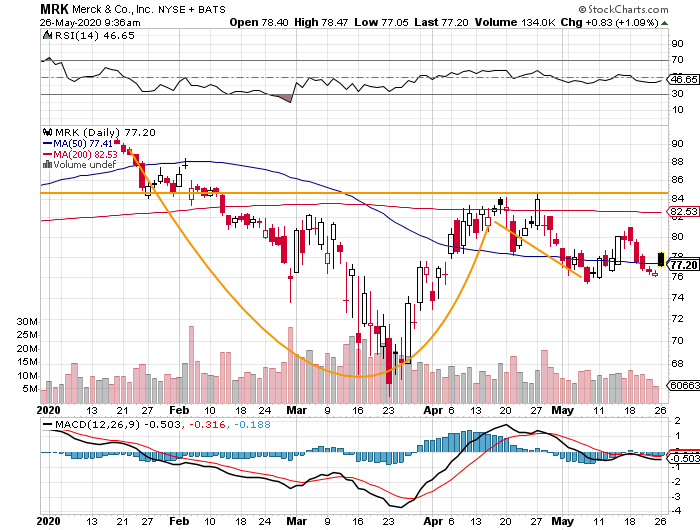 Obviously, this morning's news took the shares back above their 50 day SMA, and hanging onto that level would be technically important. The vaccines are further out than some efforts being made by competitors, so those candidates are not this year's story for Merck. The therapeutic is the story here. You give perplexed doctors a choice other than Remdesivir for treating struggling patients and that market, I believe, opens wide with demand.

Readers will see that my cup with handle pattern more or less failed. What this does for me as a shareholder is take my target price down to $85, which had been the pivot. The $75 level would be important here, and that has been support. That door opens and prices could move considerably lower. That said, I would not exit this name completely ahead of more news regarding the effort with Ridgeback Biotherapeutics on EIDD-2801.

Get an email alert each time I write an article for Real Money. Click the "+Follow" next to my byline to this article.
TAGS: Drug Approvals | Investing | Stocks | Technical Analysis | Trading | Biotechnology | Pharmaceuticals | Coronavirus