Sometimes CEO's deserve the benefit the of the doubt, Jim Cramer reminded viewers on Mad Money. So many times the analysts get it wrong, he said, but no one knows their business as well as the CEO.

Case in point, Medtronic ( MDT) , which got clobbered in January on negative analyst comments. But on January 8, Cramer sat down with the company's CEO and learned their product pipeline had never been stronger. Shares have since rallied from $82 to $96 after a strong quarter that included raising their full-year guidance. Let's see what the charts show up now.

In this daily bar chart of MDT, below, we can see a number of bullish developments. MDT made a low in January and a successful retest in April. Last month prices gapped to the upside above the bottoming 50-day moving average line and then shortly after that MDT closed above the flat to rising 200-day line.

Recently prices move above the February-March highs and are now within "striking distance" of the September/December peaks.

The daily On-Balance-Volume (OBV) line has been in an uptrend the past 12 months and recently made a new high for the move up.

In this weekly bar chart of MDT, below, we see a mixed picture. Prices have made higher lows the past three years but it has been several months since the last high high. MDT is above the 40-week moving average line which is poised to turn positive.

The weekly OBV line has been in a decline from September which suggests that sellers have been more aggressive. A stronger or rising OBV line would help the technical picture.

Last month the weekly MACD oscillator crossed to the upside from below the zero line for a cover shorts buy signal. Further strength in the MACD indicator would give us an outright buy signal. 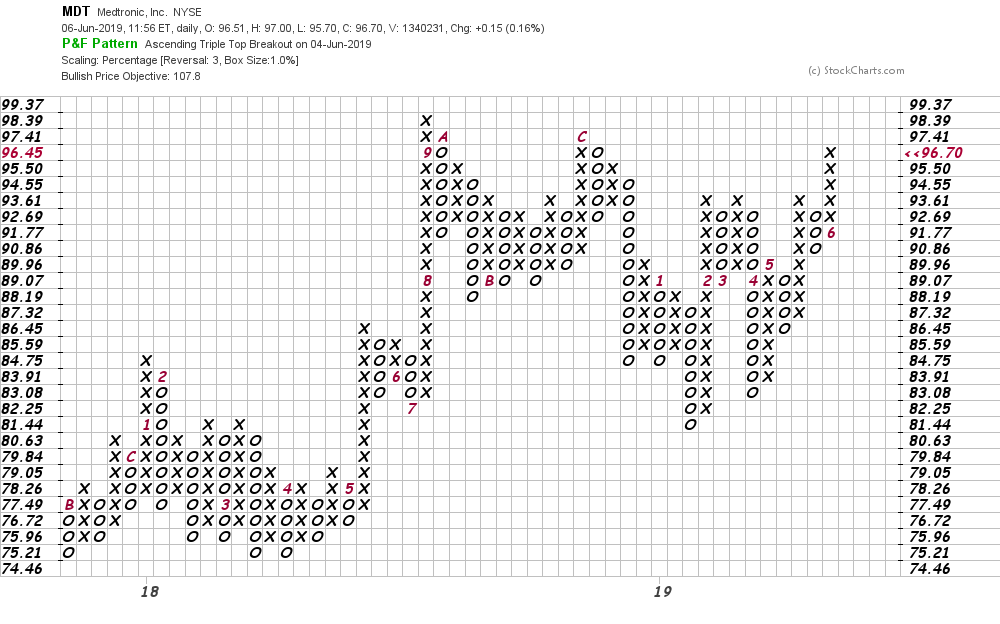 Bottom line strategy: MDT has some technical positives going for it but it still needs to clear the $98-$100 area.