Martha explained that Medtronic has its best pipeline ever and his company has a great mission. He said the culture at Medtronic is about being bold, thinking big and making big bets on what's possible in the future.

Martha was bullish on his company's deep brain stimulation technology, which is able to sense brain signals and aid in therapies for Parkinson's disease, among other neurological conditions.

Medtronic is also disrupting the back and spine surgeries using robotics, Martha said. Currently, spine surgery is an art form that relies on the skills of your surgeon. But soon, he said, it will become a science that robots will be able to perform even better.

Let's check out the skills of the chart readers.

Trading volume has been declining since March and the On-Balance-Volume (OBV) line made a low in March and another low in June. The rise since late June has not been smooth and the line has retreated in September and so far in October.

The trend-following Moving Average Convergence Divergence (MACD) oscillator has been trading around the zero line since May and that tells us there is not much "trend strength".

In this weekly bar chart of MDT, below, we see a mixed picture. Prices are in an uptrend from the March low and they are above the 40-week moving average line but the line still has a negative slope which means the rally has not been strong enough to turn the trend positive.

The weekly OBV line shows weakness since the middle of August and that tells us that sellers of MDT have been more aggressive than buyers in this time frame.

The weekly MACD oscillator turned bullish in September as it crossed above the zero line but we can see that some momentum has been lost as the two moving averages have begun to narrow.

In this daily Point and Figure chart of MDT, below, we can see a recent upside breakout and a potential price target in the $129 area. 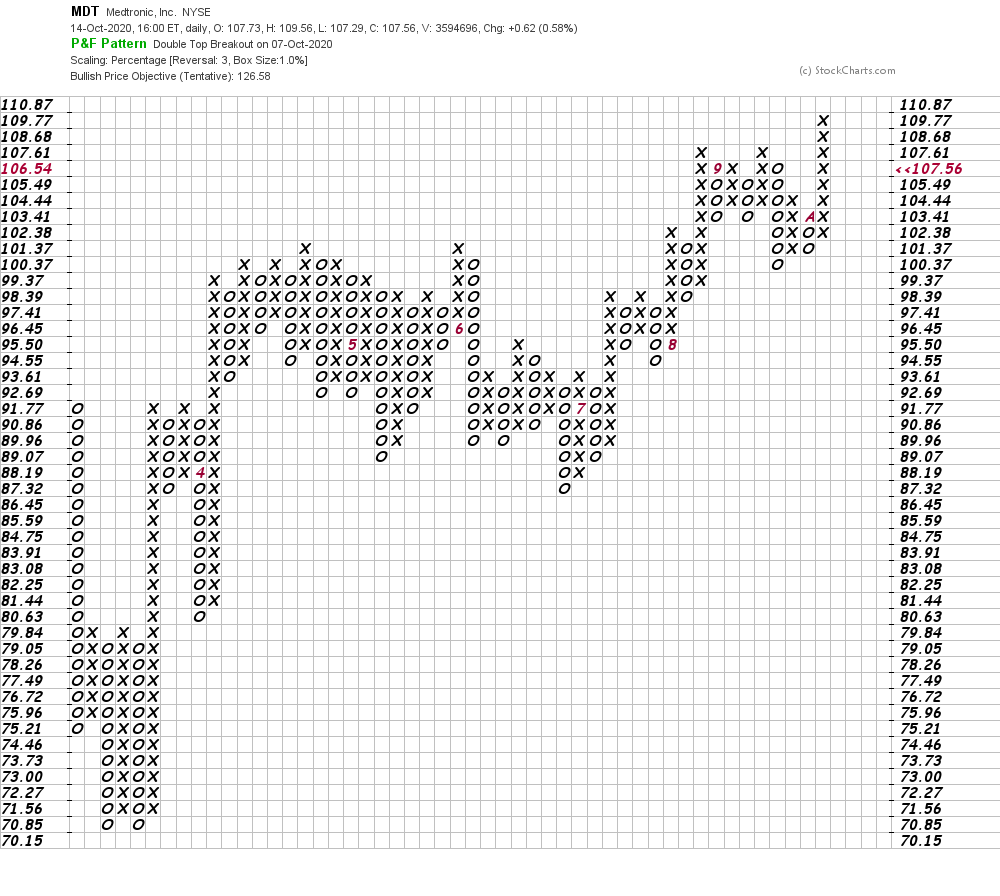 Bottom line strategy: When we looked at MDT back on May 18, we wrote "MDT is in "no man's land" -- too far above where I would risk (below $90) and too far below a breakout point to give me confidence." Prices weakened into late June. Today I see prices are higher than back in May but the indicators are just not "in gear" with a bullish recommendation. I would look for some sideways to lower price action in the weeks ahead.

Get an email alert each time I write an article for Real Money. Click the "+Follow" next to my byline to this article.
TAGS: Investing | Stocks | Technical Analysis | Trading | Health Care Equipment & Services | Life Sciences | Science | Mad Money | Executive Interview

The issue now is whether stocks and indices can find support before giving back too much of yesterday's gains.

There Is No Shortage of Kevin Bacon-ing in This Market

The worst example? Netflix. Competition has ended the Golden Years for this streamer.

PPG Has Come Roaring Back to New Highs

A real company with real earnings and real growth.

We are no longer standing aside.

The stocks of the streaming giant and the social media company appear to have additional downside ahead.