You've All Been There... (Tune of Hotel California by the Eagles)

On a dark desert highway

Warm smell of fast food rising through the air

Up ahead in the distance

I saw a gold and red light

My heart grew happy as I knew I'd stop in

It will be Mac Tonight.

McDonald's Corp (MCD) CFO Kevin Ozan has been promoted from that post to Senior Executive Vice President of Strategic Initiatives.

Ian Borden, current President of McDonald's International has been named Executive Vice President and CFO effective this September 1st. Borden is a 30 year McDonald's veteran who has served as CFO of Asia-Pacific, Middle East, and Africa, as well as CFO of Russia and Eastern Europe.

Does It Mean Much?

Well, does it? As the nation, and planet prepare for tougher economic times? That is the kind of environment that a firm like McDonald's can usually do well in. The food tastes good, and for a lot of folks, while not dirt cheap, would still be affordable at least upon occasion, even if the now apparent recession does indeed show up. On top of that, it's a way to keep the kids happy on nights where time is precious, let's say one parent is at the soccer fields and the other at the school play.

McDonald's stock, though, is not really cheap. With an S&P 500 forward looking PE ratio currently trading with a 16 handle, MCD trades at 25 times next twelve months' earnings. Second quarter earnings are due in a month from now (July 27th). Wall Street is currently looking for adjusted EPS of $2.45, with a range spanning from $2.27 to $2.62. Consensus is for revenue of $5.85B with is range of $5.45B to $6.34B. At consensus, the quarter would be good for earnings growth of 3.3% on revenue growth that contracts slightly.

Readers will recall that McDonald's had a strong first quarter driven by 11.8% growth in international sales (vs. 3.3% at home) despite having shuttered operations in both Russia and Ukraine during that period. We now know that this business is not going to come back anytime soon.

For the first quarter, McDonald's produced $2.33 in free cash flow per share that left the firm with a net cash position of $2.357B, which is solid, but was halved over three months' time. This took current assets down to $4.656B as receivables at the end of the period were considerably lower than usual for the firm as well. Current liabilities added up to $4.234B, leaving the firm with a current ratio of 1.1, which does pass muster with us. The only thing here that I do find troubling would be that just three months earlier McDonald's ran with a far superior current ratio of 1.78.

The firm ended the March quarter with total assets of $50.877B, including $2.813B in "goodwill" and no other tangibles. This is perfectly fine and not abusive in any way in my opinion. Total liabilities less equity amounted to $56.868B including $34.03B in long-term debt. This is somewhat problematic for me as that is a heck of a lot of debt relative to cash on hand. I also do not love seeing balance sheets where total liabilities outweigh total assets, even if the current situation suggests that short to medium term obligations can certainly be met.

Do we love this balance sheet and the direction it appears to be heading in? Not at all. Is McDonald's okay in a recession? I would like to see that debt load reduced. 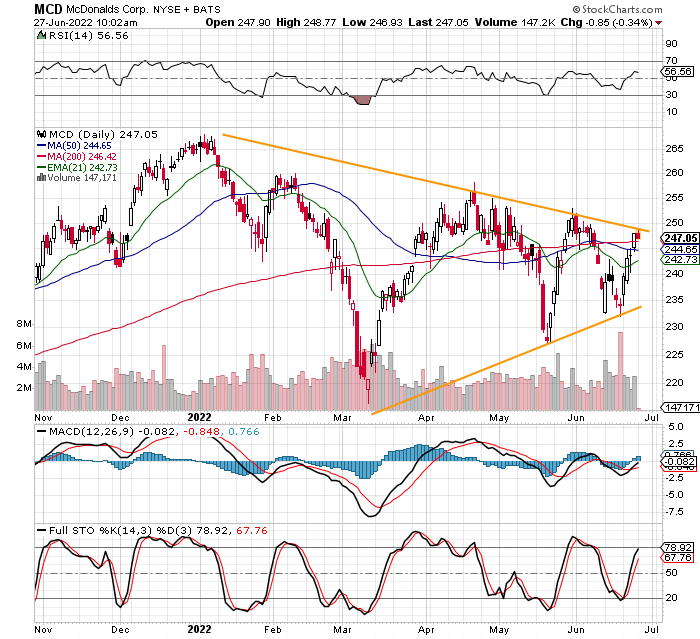 MCD has been gaining momentum of late, but chart watchers will see that even with rising Relative Strength, and improving optics for the daily MACD and the Full Stochastics Oscillator, the latest move higher still fits well within a closing almost year long pennant/flag here. Each high has been lower than the preceding high and each low has come higher than the preceding low. This type of behavior, in my experience, usually leads to an explosive move that could be in either direction.

One real positive would be that last week the stock retook its 21 day EMA, its 50 day SMA and its 200 day SMA. So far, MCD has held that 200 day line, which is key. The level is being tested from above now. Should MCD survive this test, portfolio managers not only will refrain from selling the stock, but they become that much more likely to add exposure while the shares remain within 3% to 4% of that line, which would be viewed as a pivot.

I am a little perplexed. The stock is not inexpensive. I expected the balance sheet to be in better shape than it is, but the technicals are supportive of a stock set to do something sharp and possibly do so in a northerly direction. This is a case where the fundamentals and the technicals are close to being at odds with each other. MCD does pay shareholders $5.52 annually per share for a dividend yield of 2.23%. That's not nothing. Here is my Q2 earnings (minimal lots) McDonald's trade idea...

Get an email alert each time I write an article for Real Money. Click the "+Follow" next to my byline to this article.
TAGS: Earnings | Economy | Investing | Stocks | Technical Analysis | Trading | Consumer | Food & Drink