For his first "Executive Decision" segment of Mad Money Wednesday evening, Jim Cramer sat down with Ynon Kreiz, chairman and CEO of toy maker Mattel (MAT) , which has been hard at work turning itself around after its accounting was called into question.

Kreiz said Mattel's accounting issues are now behind it and the company is focused on profitability and capturing value from their existing intellectual property. Regarding profitability, Kreiz said that Mattel has reduced its manufacturing footprint and is restructuring its operations to be flexible and able to respond to market conditions. He noted that Mattel was able to respond quickly to the Baby Yoda phenomenon and will have toys on shelves as early as April.

Some of Mattel's traditional brands, like Barbie, saw a 12% increase this past quarter after being redesigned. Barbie is one of many mature Mattel brands seeing lots of innovation, he said. The company is expanding beyond just toys and into movies, games, music and more, with many strong content partnerships.

Finally, when asked about China, Kreiz noted that Mattel manufactures about 66% of their toys in China, below the industry average, but it is working to reduce their exposure as part of their flexibility initiatives.

Let's check out the charts of MAT to see if all these initiatives will pay off soon for investors.

In this daily bar chart of MAT, below, we can see that prices have outlined a very large descending triangle pattern - a series of lower highs and roughly equal lows. The lower highs tell chart watchers that sellers of MAT have been more aggressive over the past 12 months while the roughly equal lows suggest that a buyer or buyers are defending the $9.50-$9.00 area.

Prices are now below the declining 200-day moving average line and just above the neutral 50-day moving average line. Prices made a higher low in late October versus late August but the trading volume (histogram) does not show a pick up in activity and the On-Balance-Volume (OBV) does not show much in the way of aggressive buying. An improvement in price without an increase in volume is suspect in my book.

In this weekly bar chart of MAT, below, we can see that prices have been in a weak condition the past three years. While prices seem to attract some buying interest around $10 and just below the 40-week moving average line still has a negative (bearish) slope. A close above the 40-week line at this stage would not impress me.

Trading volume and the weekly OBV line do not show that buyers have returned in any significant way. If buyers have been accumulating shares in MAT they have been under the technical radar.

The weekly MACD oscillator has been improving all year but is still below the zero line. The rising MACD oscillator could be the strongest vote for a long position right now.

In this first Point and Figure chart of MAT, below, we can see a large equilateral-like triangle formation. Prices have met an upside price target around $12. 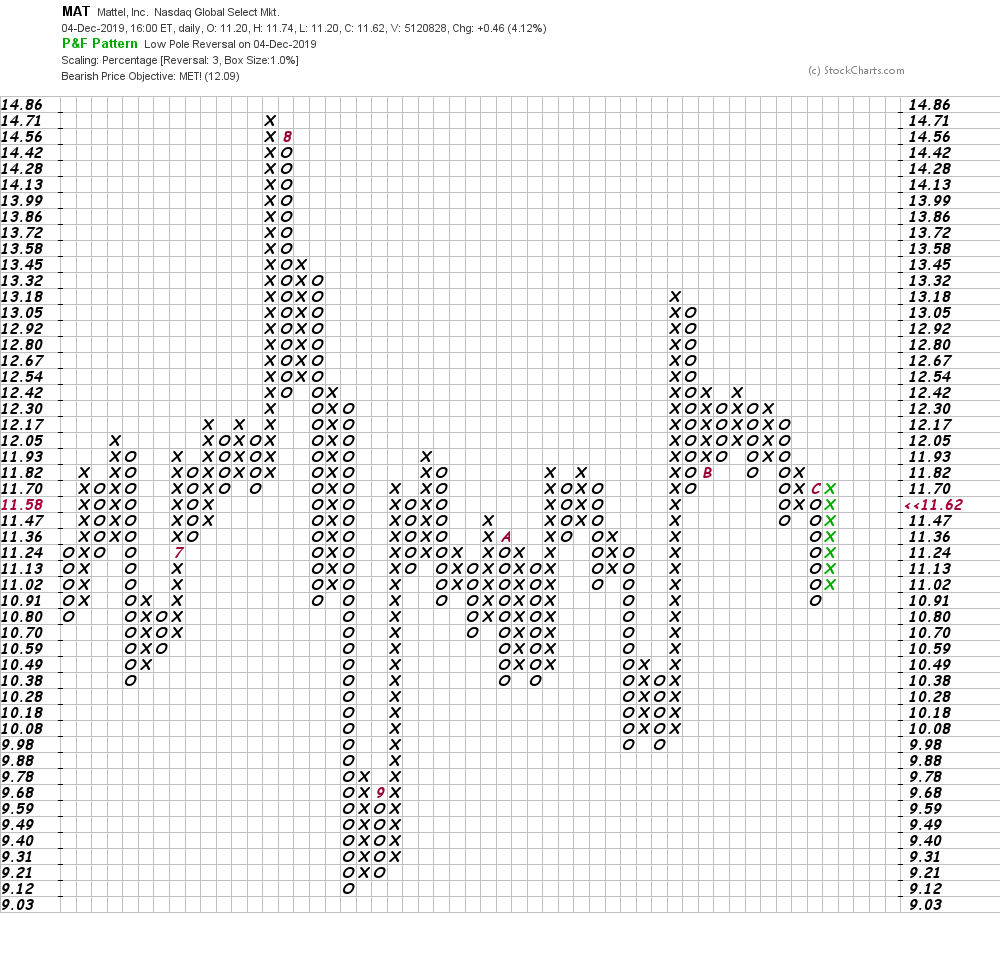 In this second Point and Figure chart of MAT, below, we used weekly data and here the data suggests a possible $15 price target.

Bottom line strategy: Has the price action on MAT been bullish? Not really. Could MAT have a technical rally to around $15 in the next few months within a broad market rally? Sure.

Get an email alert each time I write an article for Real Money. Click the "+Follow" next to my byline to this article.
TAGS: Investing | Stocks | Technical Analysis | Trading | Mad Money | Executive Interview | Consumer Discretionary