Tonight's the night...It's gonna be alright? Hard to say, but we can certainly think about right now, can't we? Marvell Technology Group (MRVL) , a former Sarge fave and former member of my original 5G technology implementation portfolio, is set to report the firm's fourth quarter performance on Wednesday evening. I had to look it up, but I have been out of this name since last August. Obviously I took my leave of the shares a bit on the early side, but shed no tears for me, I did turn a 44% profit on that trade. No woulda, coulda, shoulda's, especially on profits.

I see 27 analysts that follow this name. The consensus estimate for quarterly EPS currently stands at $0.29, which if realized would be good for growth of 70%. Of those 27 estimates, and you're going to love this... the high estimate is $0.30, and the low is $0.29. Is everyone copying the smart kid's homework? I don't know. As for revenue, consensus is for about $787 million, which would be growth of just under 10%. There is at least some variance here with a low estimate of $784 million, close enough to consensus, but someone is sticking their neck out all the way up at $991 million. The street is generally looking for adjusted gross margin of more than 63%, and an operating margin in between 27% and 28%.

Very interestingly, as close as so many of these numbers seem to be, many balls remain up in the air, but they are not all moving in the same direction. Among these 27 professional followers of Marvell Technology, over the past three months 15 have increased their estimates for earnings, while four have revised downward. However, for revenue, there have only been nine upward revisions, but 12 that went lower. The implication might be that the firm beats on those margin expectations.

I think it necessary to inform those that may not have noticed, that three five-star (TipRanks) analysts have stated some kind of opinion this week ahead of earnings. This is some interesting stuff here. On Tuesday, Christopher Roland of Susquehanna (ranked number 55 of 7,342 analysts followed by TipRanks) reiterated his "buy" rating on MRVL while setting a $60 price target. Oddly, Rolland sees a negative EPS for the current quarter, with the street up in the $0.20's for Q1. Timothy Arcuri (number 58) of UBS on Monday, maintained his "buy" rating on MRVL while increasing his price target from $50 to $53. Now, less optimistic is Morgan Stanley's Joseph Moore who on Monday maintained an "equal weight" rating, what some folks call a hold. Moore also increased his PT from $44 to $49. It may or may not be pertinent that while Moore is highly rated, he is not in that super elite category with the other two, nor does he have the track record for this specific stock that do the other two. 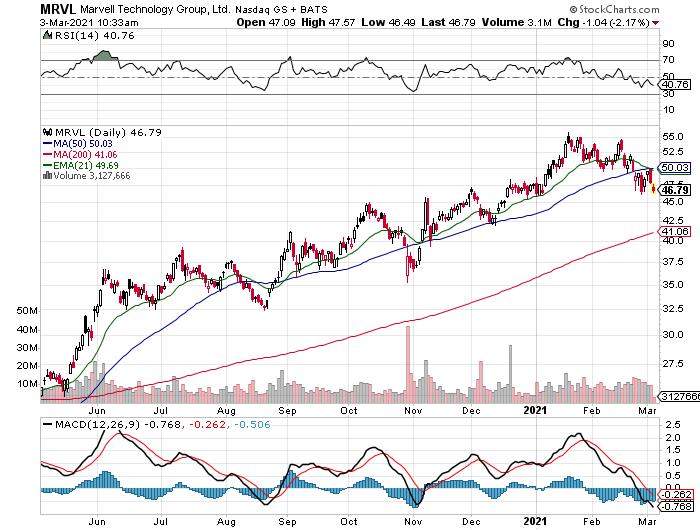 Tough chart to trust. I will say that. Readers will quickly see the "double top" that formed at the top of the chart in 2021. That's a very bearish pattern, but the shares are 15% off of those highs, so that impact may already be baked in. What might not be fully priced in is the swing trader's "death cross" which would at least for me be the crossover of the 21 day EMA (green) over the 50 day SMA (blue). In addition, a lot of portfolio managers follow both the 50 day and 200 day SMA as religion, and since giving up the 50 day line on February 23rd, that line has acted as very stiff resistance on almost a daily basis.

I would say, let me rephrase this. You do you. I will not be screwing around with MRVL equity ahead of the digits. What I am thinking of doing is putting on a short term bull call spread... let's say grab the March 5th (Friday) $47 calls for roughly $1.45, and sell the March 5th $50 calls for $0.55. That all in itself creates a net debit of $0.90. If that's all one does, the shares have to close above $47.90 on Friday to end up in the money.

Voila !! This trader now only needs $46.90 to make money to the upside. Keeps the dime if the shares close on Friday in between $42 and $46.90, and runs into real equity risk should the shares close Friday below $42. Know what, I like this trade. I may just put this one to the tape after I see it published. Or something similar if the prices have moved around.