Marvell Technology (MRVL) reported the firm's second quarter financial performance on Thursday afternoon. The firm posted adjusted EPS of $0.34, which beat Wall Street by three cents on revenue of $1.076 billion, a slight beat, but good for annual growth of 48.5%. GAAP EPS landed in the red, with a loss of $0.34 per share. The adjustments account for operating expenses including integration and merger costs associated with acquisitions and other irregular items.

Marvell is changing things up a little bit for this period. In the past, Marvell had reported results across three business units... Networking, Storage and Other. From here on out, the firm will report results across five end markets. The largest of these businesses is the Data Center, which contributed $433.7 million or a rough 40% toward the whole revenue pie. This unit is accelerating rapidly, showing year over year growth of 62% and sequential growth of 57%. The group centers around all things "cloud" and immediately benefited from the Inphi acquisition closed in April.

The second largest business in Enterprise Networking, which include routers, switches, wireless access points, firewalls and load balancers. The unit contributed $222.7 million in revenue, up 40.8% over last year and 37.4% over Q1. Carrier Infrastructure, all things '5G" posted revenue of $196.7 million up 38% y/y, and 17% q/q. Among smaller units, Consumer pitched in $165.4 million, and Auto/Industrial "drove" $57 million in "revs"... both showed year over year and quarter over quarter growth.

For the current quarter, the firm looks for net revenue to amount to $1.145 billion (+/-3%) which is slightly above the Wall Street consensus of $1.14 billion. Adjusted gross margin is seen at 64% to 65%, and adjusted operating expenses are projected $365 million to $370 million. Adjusted EPS is being guided toward $0.38 (give or take three cents), also above the $0.37 that Wall Street has in mind. GAAP EPS is seen at a loss of $0.10 per share, give or take four cents.

Investors should also keep in mind that earlier this month, Marvell announced plans to acquire Innovium, which should further enhance the firm's capabilities in regards to providing for the data center. The deal is for $1.1 billion in stock, is expected to close this year, and should add $150 million in incremental revenue over the next fiscal year.

Marvell Technology is followed by 24 sell side analysts. Just this morning alone, 13 five star (rated by TipRanks) analysts have opined on the name. There were 10 who either initiated or reiterated "buy" ratings or their firm's equivalent. Three initiated or reiterated "hold" ratings or the equivalent. There were a plethora of small changes made to target prices.

For the entire 13 analysts in this subset, the average price target would be $70.62. The high is $85 (Hans Mosesmann at Rosenblatt), and the low is $61 (Joseph Moore at Morgan Stanley).

If you have seen me on television, then you have heard me mention Marvell as one of the elites in the chip world. I usually mention this name just after bringing up Nvidia (NVDA) and Advanced Micro Devices (AMD) , and just before I mention Taiwan Semiconductor (TSM) . I am long no other chip names.

I think the firm is performing well across all business units and that performance is accelerating to the upside. The firm is buying growth where it sees opportunity, and I am on board with that as well. I am adding to this name on dips. 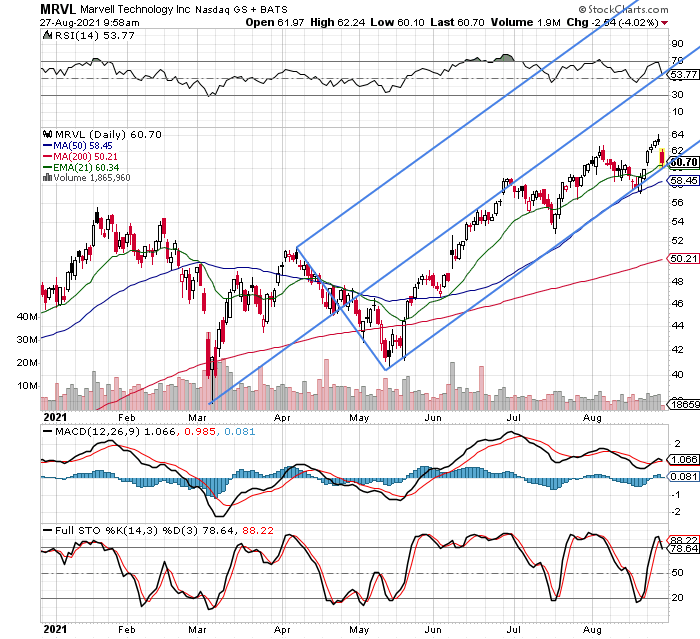 The Full Stochastics Oscillator says MRVL is technically overbought. The RSI disputes the point. The daily MACD looks good, but could swing the other way quite easily. I will be adding to this name this morning close to $60.34, which just happens to be where the 21 day EMA runs smack dab into the lower trend line of a Pitchfork model that has been in place since early March. My price target remains $72. Just an FYI. Traders long at least 100 shares can still write January '21 $70 calls for about $2.50. That's one way to make it easier to hit target, or reduce net bases.

(MRVL, NVDA, and AMD are holdings in Jim Cramer's Action Alerts PLUS member club. Want to be alerted before Jim Cramer buys or sells these stocks? Learn more now.)