We all do it. We all have that little voice in the back of our heads. It asks "what if"? That voice marvels at the luck, or lack thereof when considering decisions made long ago.

What if I entered the NYPD Police Academy in the wake of the crash of 1987? I had an entry date. What if I had never looked through that window, the first time I ever saw my wife that cold January morning in 1983? The voice also makes an honest attempt to understand conditions currently in place that allow not just traders, but ordinary folk to better navigate a future that always is, and must always be... uncertain.

What if the present becomes somewhat difficult to understand? Kind of makes simply being pragmatic a whole lot more complicated. Brexit. Deal or no deal? Boeing (BA) ? Implications that impact several industries at once. College admissions scandal? Shaking my head.

The second thing one is taught at Jungle Warfare School is not to trust your maps. Topography changes rapidly in the rainforest. In case you're wondering, the first thing taught is how to prevent more than one death if the group somehow manages to anger the bees.

All that said, the simplest of questions become difficult to answer without a measure of false confidence. Last night, I happened to notice that Jeffrey Gundlach of DoubleLine Capital had expressed his opinion earlier in the day that "the stock market was and still is in a bear market." Oddly enough, I was asked that very question in two separate media appearances on Tuesday. The only thing that I think we know for sure is that people who tend to think about these things are thinking about this.

Gundlach feels that stocks could turn negative in 2019. Okay. Would that shock anyone reading this? True, the S&P 500 had dropped more than 20% off of it's 2018 highs by the lows of late December. Credit for the nearly 20% rebound off of those lows had been broadly placed at the doorstep of the Federal Reserve. Again, okay. Would it not also be true then, that much of the equity markets' decline that ran from early October through late December would also be at least in part attributable to monetary policy?

One must divorce the purity of economics from the reality of trading and investment. On Tuesday, I answered the question the same way both times. I don't know. I understand that the sanctity of price discovery had long ago become skewed toward the perverse. That said, there are people that count on me to excel in whatever environment is provided, or at least not get my face ripped off. Yes, if first-quarter GDP looks any softer the economy could actually contract. Does this force the Fed to move policy back toward something more in line with other global central banks? Does this in turn force yield seekers to get riskier with their dough? Does that in turn create a price to earnings multiple expansion?

A central bank sensitive to such matters is the short to medium-term key. Irresponsible fiscal policy only drags on future growth and exacerbates the inability to increase the value of credit over time in theory. The trap is set, and perhaps only partially sprung. We have taken the cheese. Longer term, outcomes are sub-optimal. In the meantime, one might just die hungry unless one eats said cheese. Understand?

Twenty four hours ago (Tuesday morning), the same Bureau of Labor Statistics that releases the February numbers for employment last Friday, put their February data for consumer levels inflation to the tape. Both CPI at 1.5%, and Core CPI at 2.1% when measured year over year (how you measure inflation) came in a bit light. We know from Friday that wage growth had improved to 3.4% on a yearly basis.

Even if we completely disregard the reduction in hours worked per individual (which is real), that 3.4% is just equal to the headline rate of consumer inflation of 1.5% added to our most recent (Q4) year-over-year rate for Non-Farm Productivity growth (1.9%), also released by the BLS. This means in simplest theory that the individual worker may have kept up with the economy for the most recent period (though Q1 productivity numbers are a ways off). Now, if core data for inflation are used, the worker is still not close. In other words, there is no sound argument to be made at this time for tighter monetary conditions. I would consider an imminent reduction in the monthly pace of quantitative tightening, that will likely be announced next Wednesday, to be constructive.

First-quarter GDP expectations will continue to develop as the Census Bureau releases January numbers for Durable Goods Orders this morning.

So... You Think You Want a Trade Deal?

U.S. Trade Representative Robert Lighthizer seemed cautious. "We're either going to have a good result or we're going to have a bad result before too long" were the words spoken, according to the Financial Times. Still no date has been set for any kind of signing between the heads of state. Enforcement still seems to be an issue unresolved. I got to thinking.

It has been in the news of late that a summit at President Trump's Florida residence had been removed from President Xi's schedule in order to save any embarrassment should the former walk away from a deal like what happened between Trump and Kim in Vietnam. So, I wonder, just what had the Chinese side thought that they might pull off at the last minute? Perhaps there was intent to, shall we say, "get over" at a critical time on a world stage.

Unless one lives under a rock, one noticed a Wall Street Journal report last week citing that as many as two dozen universities that do contract work for the U.S. Navy had been targeted and perhaps compromised by hackers that were believed to be Chinese in an elaborate attempt to steal important technologies. Now comes a U.S. Navy report that the branch and it's contractors are under "relentless cyber attack" by a number of adversaries, with Chinese and Russian attempts being the "most adept." The scariest item to come out of this report would be that there is an admission here, also found at the Wall Street Journal... that the Navy and the Department of Defense only have limited understanding of just how deep the loses are.

National security is job one. Cutting a nice deal that benefits both sides must come second. How important is supremacy on the seas, in the air, on the ground? What do you think a hampered ability to project influence through superior firepower would do to the economy? What if there was a bigger kid on the block? One belt, one road. More like the road between Kunu-ri and Sunchon. Be careful.

Chinese economic growth does get back on track, I did initiate a small long position in ZTO Express (ZTO) on Tuesday ahead of earnings. Not a highly priced stock, this $15 billion Shanghai-based delivery services company reported better-than-expected EPS and revenue numbers. Looking forward, the firm projects a 35% to 40% increase in parcels delivered for 2019 over 2018.

The goodies? On Tuesday evening the firm announced a $0.24 (per ADS) special dividend expected to be paid on April 8 to shareholders of record on April 1. The firm also announced that it had repurchased 1.7 million ADS shares at an average price of $15.85 in the fourth quarter. By my flawed count, this only puts a minor dent in the announced repurchase authorization (last November) of up to $500 million.

The shares traded higher in the wake of these number, and are now just a smidge lower in the pre-opening session. The thought, as far as I am concerned, is that this might be a way to play Chinese trade and Chinese growth on a budget. Nothing more, nothing less. 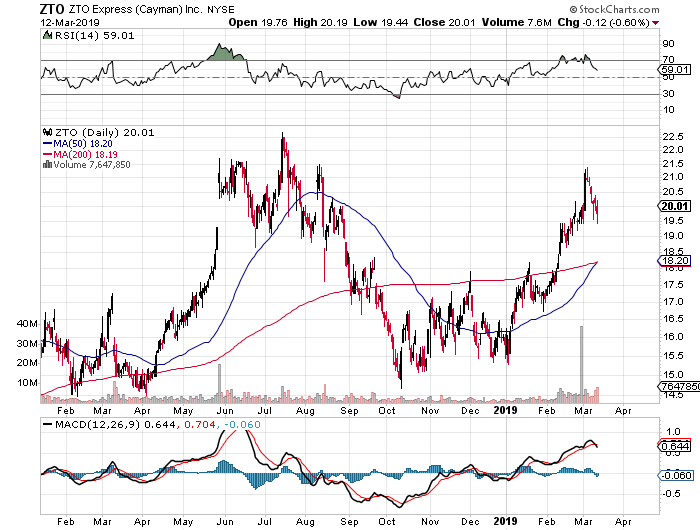 There are a couple of interesting oddities visible on this chart. For one, we can see that the name is susceptible to nearly 100% retracements. The reason that I did not throw the Fibonacci levels on the chart is this: I wanted you to see clearly just how wild the messaging here is. The daily MACD seems to send a bearish signal. The 9 day EMA goes negative, while the 12 day crosses over the 26. Just as this happens, the 50 day SMA crosses over the 200 day. A golden cross, which is a bullish signal.

I also initiated an entry level short in Netflix (NFLX) . You know why, and an entry level long in CVS Health (CVS) in addition the UnitedHealthcare (UNH) long initiated amid the weakness of last week. How cheap can those two get? Dumb question. Anything can happen, politically. We know that. ZTO is interesting though. No price target. A trade deal pop is the target.

(CVS Health and UnitedHealth are holdings in Jim Cramer's Action Alerts PLUS member club. Want to be alerted before Jim Cramer buys or sells CVS or UNH? Learn more now.)

Get an email alert each time I write an article for Real Money. Click the "+Follow" next to my byline to this article.
TAGS: Economic Data | Federal Reserve | Investing | Markets | Stocks | Technical Analysis | Trading | China