Paper Boy. That was my title. As a youth, growing in Queens, NY... most businesses would not hire a kid, at least not until the age of 16. If a kid needed, or wanted to work, that kid had to be somewhat entrepreneurial. As a paper boy (there were paper girls among us), we each had our own routes, but were not employees of anyone. We had to buy the papers. We had to deliver the papers, and we had to go out each night and knock on the doors of our customers in order to collect. In retrospect, a pretty dangerous job for a child. Rain, snow, wild dogs, gangsters. All needed to be avoided. I am sure many readers will recognize themselves in this intro.

Personally, I delivered the New York Daily News every morning before school from the age of 11 through 16 (one of the larger routes in my area), as well as Newsday after school. Had to hand the Newsday route off to my sister when that paper switched to morning delivery. There is one dog that I remember. Made my life miserable. Always in the yard (fenced in, thankfully). Obviously abused. Actually bit me more than once. Delivery to this house was no problem. Fold the paper and throw it. Collecting my fee? Problem. Learned after having to choose between a violent confrontation with an angry dog and no pay, to offer the dog a treat, so that I could enter that yard without being tortured. Perhaps, the first time in my existence that I recognized a pattern and adapted in order to evolve. Suddenly, that dog liked me.

The broad marketplace enjoyed on Thursday, what would be a third consecutive day of notable gains, coming on the heels of Monday's trade war related meltdown. Materials would lead the way on Thursday, along with the Financial sector, as at least the yield for the one month T-Bill would un-invert with the yield for the 10 year Treasury Note. For a time on Thursday even the three month un-inverted with the 10 year (gee willikers), though, there are still many unnatural inversions throughout the curve.

So, are equity markets still in correction mode? Is this stage of consolidating prices over just yet. Some smart people who I read really do think so. I do not necessarily disagree with that thought. After all, the central bank is apparently handcuffed for now, and that is the key to valuation, both for equity and currency markets, even more so than what are hopefully temporary (but maybe not) conditions for international commerce. I am however, skeptical. Unconvinced.

I mentioned to a colleague on Thursday, as markets traded near their highs for the day, that the S&P 500 would likely need to come in and test the 50 day SMA from the upside. The index did come in hard, and bottomed within 5 points of that mark. She asked how I knew that the market would come in like that. The angry dog. Every day, this week (up or down), after 3 pm, the markets have shown increased weakness. Algorithmic profit taking. The 50 day SMA was just what I thought that those algos might focus on.

I was out last week, so I thought, let's just see how far back this goes. Take a look at this....

Apparently, there has been increased selling going into the close every single day since last Wednesday, May 8th. How interesting. Now, an astute trader might find a way to work around something like this until the pattern stops repeating. Low-touch, long-term investors might not focus on this as much, but still might time an entry or exit around such regularity.

As for the rest of us, today (Friday) is a monthly options expiration day. Does that mean that the angry dog will behave differently this afternoon? It might. Also might be a good day to play the options lottery, if you catch my drift. What's that, for the newer kids? Low risk, high reward options plays that usually lose. Long puts or calls for pennies late as a stock pings to a strike price. Can't lose much, unless one accepts assignment, and thus, faces unwanted equity risk over the weekend.

The Case For Increased Immigration

We all noticed reduced birth rates as those headlines made their way through the news cycle this week. We all know for quite some time now, that as a nation, our demographics are not helpful, and while acting as a weight upon long-term productivity will also force our national fiscal policies into failure at some point in the foreseeable future.

Did not hear a lot on Thursday about a report released by the Labor Department that showed significantly increasing participation in the domestic labor force by those born elsewhere. The report shows that 27.2 million U.S. workers were born outside of the U.S. in 2018. This is a 3.7% increase from 2017. This is a 17.2% increase over a 10 year period. According to the Wall Street Journal, the number of U.S. born workers participating has increased just 2.8% over that same decade. There's more. Check this out. For 2018, the unemployment rate for (documented) foreign born labors printed at 3.5% versus 4.0% for domestic workers. Labor force participation? Same story. 65.7% for those born elsewhere. 62.3% for those born here.

The president released a plan this week closely relating work visas to talent, skills, or education. He is not necessarily wrong on this. Many developed nations already vet in this way, and this nation certainly does need to vet the incoming in order to best avoid folks that might enter with an intent to harm. However, I might be slow to discourage those, even those less skilled who seek entry with a simple intent to find work not available at home. We all came from people who had to run away from something. In order to grow an economy, and to at least attempt to support a mature domestic demographic, we'll need people who want to (officially) participate, who want to stand next to us, and face in the same direction. Life is hard. We can, and we probably should help each other.

Up, Up and Away

You all know that I love the software/cloud type names. Heck, that group has supported my family in recent years. Some names have been staples in my portfolio for quite some time. Amazon's (AMZN) AWS unit showed revenue of $7.69 billion by itself in the first quarter, 41% year over year growth. According to research firm Canalys, AWS, and Microsoft's (MSFT) Azure combine to dominate nearly 46% of all global cloud computing. Along with naming Zuora (ZUO) my top pick for the year back in late December, I have long been a firm believer in Salesforce (CRM) , ServiceNow (NOW) , and Adobe (ADBE) .

Two other cloud names that I have been less loyal to, meaning that I have traded these names, but not invested in them so to speak, would be Workday (WDAY) , and Splunk (SPLK) . Why do I bring them up now? Simple. Right now, their charts are even more interesting to me than the names that I have long backed. I am currently flat both. Splunk, the beast of Big Data reports next week, Workday, the week after. For that reason, and for the fact that I may have already bored you out of your mind, let's focus on SPLK, and leave WDAY for another time. Weekend homework?

The firm will report first quarter financial performance after the close next Thursday. The industry is looking for EPS of -$0.14 on revenue of $395.4 million. The stock currently trades at 61 times next 12 month's earnings. The pattern? SPLK seems to report a first EPS loss just about every year. The first quarter also seems to be the firm's worst in terms of revenue, and then the firm performs better over the next nine months. Like clockwork. While margins have remained negative, the firm has plenty of cash on hand relative to total debt and levered cash flow is not an issue. In short, the firm appears to be able to meet all obligations with ease. I am not concerned there.

The issue? The shares, at least historically move sideways to lower in response to these earnings, but currently appear at least to me to be setting up quite bullishly. Let me show you. 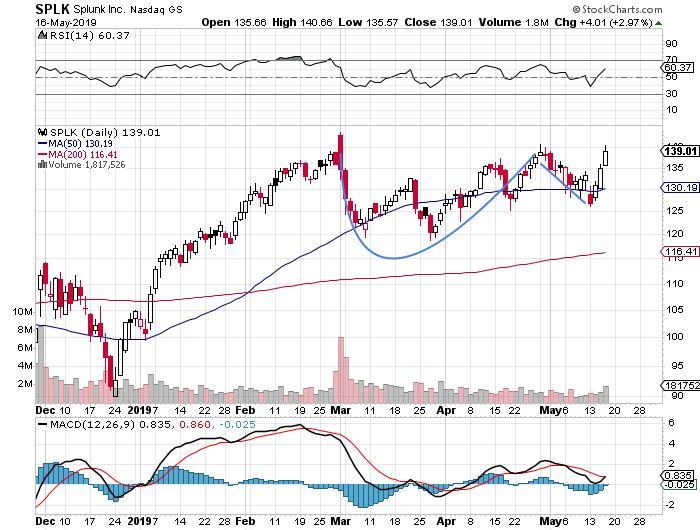 I really am not sure if I am looking at a cup with handle or a saucer with handle here. The depth of the bowl is somewhat shallow, only about 16%, which implies a saucer, but the formation is only a couple of months long, and this is a growth stock. Saucers are more likely to form over a longer time frame and not in stocks that trade with a beta this high (1.7). The handle had only corrected a rough 10% prior to this spike, indicating that it is just that... a handle. Nothing more.

Regardless, the outcome of either formation, should it come to fruition, can be quite robust. You see the peak on the right side of the cup/saucer? That's going to be my pivot, meaning that it's either going to present as resistance, or a catapult. The stock closed last night short of that level, but certainly close to attempting that test.

I am not yet pulling this trigger. We see movement toward that spot between $140 and $141, and I think I grab maybe 12.5% (I am an old floor broker, I tend to break everything into eighths), of what I would consider a full position here. The stock takes off? I have a trade. The stock responds to the quarter with it's usual June/July base building period, then I will build as well. Build a long position, that is. In the meantime, SPLK May 31st $122 puts are still worth more than a buck. Might just sell those ahead of the numbers. The May 31st $130 puts are still worth almost $3. That turns into real money.

Get an email alert each time I write an article for Real Money. Click the "+Follow" next to my byline to this article.
TAGS: Earnings | Economy | Investing | Markets | Options | Stocks | Technical Analysis | Trading | Software & Services