Not so easy. We all like to think that we bob and weave pretty well. Shuffle to the left and the right. Shuffle forward on weakness to your front. Shuffling backwards? We don't like to do that. Might also lead to a second or third step in that direction. Making a stand becomes difficult. Rallying even more so, once momentum turns against. So it is, that with the help of electronic overshoot, markets have returned to a state of heightened volatility. Where to make such a stand? The S&P 500 is now off 1.5% for 2018. Treasuries have rallied way off of their lows. The domestic backdrop is mixed. ISM numbers continue to paint a positive picture that no longer seems in congruence with the rest of the economy across a bevy of macro data-points. We'll get a lot information in regards to this later in the week.

In addition to ongoing, headline making news events that add tension to U.S./Sino trade negotiations, order flow, and sentiment alike will be impacted by the prospects of a failed vote on a Brexit deal in the UK, as well as the political overhang in the U.S. as Mueller related news seems to be getting worse just three weeks ahead of a change in leadership at the House of Representatives. That is not a market positive.

The weekend did not bring a lot of relief to already beaten down investors. Both Asian and European markets not only reacted to Friday's carnage on Wall Street, but to weak macro in Asia as well. After Chinese inflation numbers printed below expectations at both the producer and consumer levels, came news that Chinese export growth for November had fallen off of a cliff from October's pace. Then came an unbelievable revision to Japanese Q3 GDP. We all knew that the Japanese economy had contracted. Initial estimates placed the print at an annualized -1.2% q/q. That was wishful thinking in the extreme. Japan's Cabinet Office revised the Private Sector Capital Spending component from a -0.2% retreat into a -2.8% rout. Shuffle backwards? Indeed. The Japanese economy is now estimated to have contracted an incredible -2.5% for the third quarter. Looking to Europe for strength? Germany's trade surplus continues to dwindle. I would expect the ECB to do a lot of bobbing and weaving this Thursday. Don't be surprised at all for a lack of commitment on policy from that quarter. A hawkish thinking ECB is fast becoming a figment of the imagination.

On that note, Maurice Obstfeld, outgoing chief economist at the IMF was succinct. Obstfeld stated "For the rest of the world there seems to be some air coming out of the balloon and that, I think, will come back, and also affect the U.S." Obstfeld according to Market Watch, also gives the impression that while he sees U.S. growth in a good spot in 2019, he also sees a "slowing path into 2020." To that, I say two things. One... thanks, but tell us something that we don't all don't already know. Two, this guy was one of the synchronized global growth cheerleaders, so keep that in mind as you proceed.

Back to what impacts us directly. Our own wallets. Earnings have been robust, supported by corporate tax cuts and probably the largest calendar year ever in terms of corporate repurchases. Where would we be without those impacts? The Trump administration appears to be playing hardball with China on trade. Harsh sounding headlines will trigger algorithmic response in the marketplace. Algos, and a lot of mainstream reporters alike, don't understand that the guy across the table has to believe the negotiator. My guess is that there is no way around that now that humans no longer control the point of sale.

This along with an uncertain sounding Fed, and a known black hole in fiscal policy put the word risk in "risk-on" despite the historically strong performance typically offered up during the last month of the year. Markets should be impacted by a number of factors as the last three weeks of the year wear down, from less participation from managers left in the position of protecting performance (there are winners) to window dressing to tax loss harvesting (as long as one has winners to take them against).

It seems certain that that uncertain Fed would need to slow down on rate hikes going into 2019. No talk of slowing down balance sheet normalization. This as the BLS informs us that the average workweek is grinding down and those working part-time for economic reasons are growing, forcing the Underemployment Rate higher.

Risk-on behavior must be preserved for name specific instances only. One can still be bold at times, but my portfolio remains defensive even at these levels. Revenue production is a necessary consideration as one steers him or herself into 2019. Trust no one. Not even yourself. Not even me. Is cash king? Make sure cash levels are sustained at comfortable levels. Hedge accordingly. Don't know how? This is a good place to learn the basics. Get through this? Yes, you will. No, make that... yes we will.

Apple  (AAPL) has been rough on many of you. How do I know? Simple. A number of you tell me. Jim Cramer often says about this name... "Own it, don't trade it." I have often forgone Jim's advice, and done both. Like Amazon (AMZN) , where I have admittedly traded the name very well outside of my core position, I have attempted to do the same with Apple. Those results have not been in line with what I have achieved with Amazon. Fortunately, one thing that I have done well, is reduce net basis costs in the name through the sale of both put and calls.

Still, the last trade I made in the name left this trader with an unfortunate impact on net basis, but fortunately a reduced core position in terms of size. The bad news? My net basis is still just above $187 (I have not bothered to yet factor in dividend payments, so this may be just a smidge lower). The good news, I am down to one quarter of what I consider to be my intended allocation in terms of share size for the name.

Last week, Morgan Stanley's Katy Huberty (highly respected) reduced her target for AAPL to $236 from $253. She did however maintain her overweight rating. Huberty sees growth in performance for the firm's services segment as well as in wearables as able to counter an expected decline in iPhone sales. This is exactly why I am in the name. Subscription services. This is also precisely why I have been pounding the table all year on maintaining high cash levels. Dry powder. Obviously a trade condition worst case scenario is at least partially being priced in here. Lower hardware sales had to be expected at some point, but this has never been a growth story. The name trades at 11 times forward looking earnings, and has been comparably cheap to the market throughout this decline.

Funny thing happened over the weekend. My bride asked me for one of the new iPhones for Christmas. Her current phone is a little tired, but it works. Think she's the only one? You never know, but I doubt it.

I am reevaluating AAPL as if I were flat the name. This is my work. 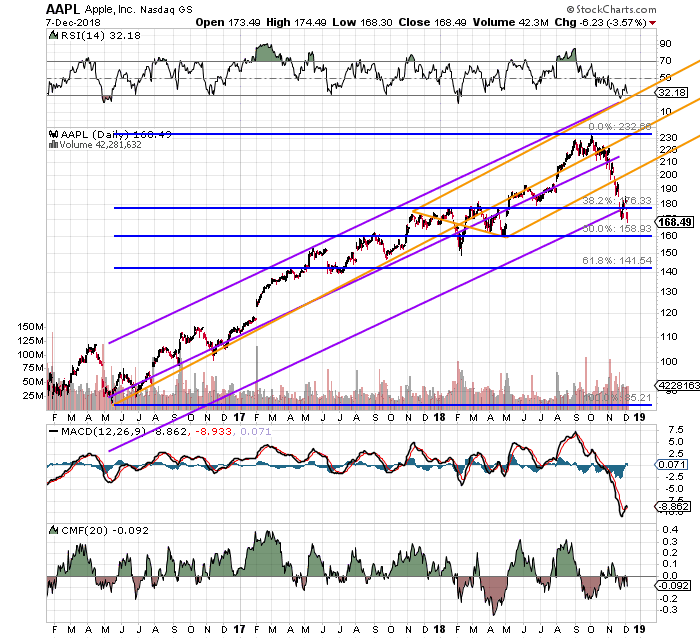 What I see is a trend whose cycle began way back in mid-2016. Everything has now seemingly gone wrong. The Pitchfork broke. My Raff Regression channel broke. Money Flow is sloppy. Relative strength has hovered close to oversold levels for the past few weeks, and the daily MACD really took it on the nose.

What's left is our old pal Fibonacci. That model offers the likelihood of help at $160 should the Regression model not be quickly regained. That is where I am most apt to plant my flag, and fix my bayonet.

Risk controlled trade idea for those who feel that Apple may experience a timed Santa Clause rally, and are willing to make a stand at Fibonacci support levels. Apple reports quarterly results on January 30th.

(Apple and Amazon are holdings in Jim Cramer's Action Alerts PLUS member club. Want to be alerted before Jim Cramer buys or sells AAPL or AMZN? Learn more now.)

Get an email alert each time I write an article for Real Money. Click the "+Follow" next to my byline to this article.
TAGS: Economy | Federal Reserve | Investing | Markets | Technical Analysis | Retail | Software & Services | Stock of the Day